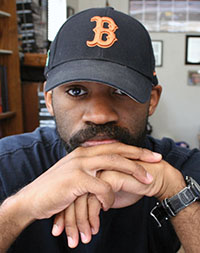 Matthew E. Henry (MEH) is a multiple Pushcart and Best of the Net nominated poet and short story writer. His works have appeared in various publications including The Anglican Theological Review, Kweli Journal, Poetry East, The Radical Teacher, Rhino, Spillway, and 3Elements Literary Review. MEH received his MFA from Seattle Pacific University, yet continued to spend money he didn’t have completing an MA in theology and a PhD in education. An educator who has taught at the high school, college, and graduate levels, he will most likely die in a classroom. This is his first collection of poetry.

MEH? Hardly. Embodying a prophetic vocation, speaking in tongues, code-switching, this poet bears witness in a world of students, parents, administrators. No one in this book is a cliche. MEH reminds us by conflating trigger-with twitter-finger, the speaker is on an edge: if anger can be specific, so can humor. So can compassion. Truth. ~Jeanine Hathaway, Long after Lauds

In this book, MEH, a.k.a Matthew Henry, offers fascinating snapshots of teacher-student predicaments that can occur for an African American in a white system. But the book also reveals the ironies involved in exchanges between any well-educated teacher and youngsters in school. Towards the end of the book Matthew reveals his own history as a student—how it felt to be bussed and educated in the white system he has now joined. These poems are deeply moving because they are so deeply felt, so carefully, lovingly crafted. ~Jeanne Murray Walker, Author of Pilgrim, You Find the Path by Walking

A riveting debut from poet-educator MEH, Teaching While Black is an honest, relentless portrait of the contemporary American classroom. MEH is in conversation with the past masters of American literature: Baldwin, Brooks, DuBois, Hughes, Morrison, and, behind them, the bloody thoughts of Shakespeare himself. But it is Rilke whose words best sum up this collection: “here there is no place / that does not see you. You must change your life.” ~Timothy E. G. Bartel, author of Aflame But Unconsumed: Poems.

“…we, with love, shall force our brothers to see themselves as they are,
to cease fleeing from reality and begin to change it.”

~ James Baldwin, The Fire Next Time

i’ve only been called “nigger” once by a student— at least
in my presence— and that under his breath. i wonder
if i’m doing something wrong, if it’s my fault it happened
only that one time. i may need to make them more
uncomfortable with my skin or centeredness,
my uppity angry Black man way of calling spades,
pots and kettles exactly what they are. racists,
red-lining, mass incarceration, stop and frisk:
all discussed with the mandatory minimum
expectation that they consider their complicity
through complacency. yet they remain unmoved
in all the worst ways. the subtle things give me pause:
their academic ease with Shakespeare, O’Brien, and O’Connor,
how Scottish ghosts, draft-dodging Vietnam, and mass-murderers
roaming the Georgian countryside feel familiar,
yet Okonkwo, Janie, and Pecola are wholly “other”
their stories inscrutable—lives they “can’t relate to”—
their humanity opaque as the sharpie swastikas
ill-fading in our bathroom stalls, the Snapchats
of Black necks in nooses casually shared, the bombs
threating to shrapnel the mosques of classmates
they never seem to see. hidden behind expensive laptops
held together by MAGA bumper stickers, they demand
to know why a student bussed from Boston would scream
“FUCK WHITE AMERICA” and think it’s appropriate
(he was suspended. he’s still screaming: quietly,
more dangerously). and here i stand: still employed— picking cotton
from fresh aspirin bottles after every utterance
which slices a peace from my soul—and asking questions
that make them cringe. light is unsettling. like when they tell me
how their heads snapped right hearing a grandparent
—or uncle, or mother, or best friend—
topple the house of bullshit cards they built
on the “post-racial Obama-era,” with a sharp exhale of breath
which revealed the truth bubbling in their heart. i ask them
about their silent response. so it was surprising, struck me as odd,
that it only happened when i told a white boy to put his phone away—
the straw that broke his fragile back. deferred his dreams.

he was incredulous in that pure white
bread, middle class way i’ve learned
to make excuses for. in his estimation
she hadn’t done enough. the math
was in his favor: she left many behind.
thousands gone.

in the back of the classroom i sit quietly
aware of the bottled tan and bleached dreads
upon a boy whose car stereo descends
in contrast with his driver’s side window
when adjacent skin of a darker hue.

pine for poor Harriet: her handgun,
her pointless heroism, her foot ferry
failure, her star treks lost without
syndication on MTV or streaming
on Netflix. yes. “only 300.” i hear you

my young, white brother. i hear you.
now shut the fuck up, and sit down.

you’ll clean the vomit from the couch after
sending her new friend you won’t call “uncle”—
the latest with wandering eyes and hands— home.
you’ll stumble her to the toilet, remove
her soiled pants, panties. roles reversed, you’ll wipe
and pray, ignoring the stench, like she did
when you were sick and only six years old.
later you’ll struggle to hold her upright
in the shower as she curses your birth
and pleads forgiveness. you’ll suppress disgust
as you wash the matted tangle of hair—
the curtain opened thirteen years ago
today. you’ll dry, clothe, brace her to bed, then
eat the cupcake Ms. Lowe gave to you at school.

said the band-aid to the shotgun wound

circle the wagons! shake the school board from its slumber!
a PR nightmare looms: a social scandal descends! produce
the checkbook! summon the East and West coast experts—
they will save us from the bed we’ve made,
the sheets we’ve wrapped around our heads.

arrange the tables! gather the markers and post-it notes!
today we face our history, teach our tolerance
of systematic oppression, and purge all past injustices
in two, one-hour sessions (lunch will not be provided).

warm the LCD! prepare the inoffensive talking heads:
the soft-spoken Brown man with kind eyes,
the well-intentioned white woman who only asks questions.
display the non-confrontational definitions of diversity,
discrimination, multiculturalism, racism and other buzzwords
that will fill the anti-bias bingo cards someone made as a joke.

let us gloss the crisis bringing us here and discuss
districts without our demographics. let us stretch our role-play muscles—
you will be misgendered, you accused of being Muslim,
and you’ll be the only white girl in honors physics.
are we all clear on our parts? let us put on the trappings
of the oppressed, the marginalized, becoming
their appropriate saviors. let us debrief and applaud.

all shall be well and all manner of things shall be well
when they ask what we have done about these who
instagramed the blackface in our assembly, tweeted
the careful geometry of beer pong swastikas, or
the myriad Halloween costumes our faculty now knows
they should not have posted on Facebook. or worn to school.
each was insensitive and offensive. we will, we must, do better.

compose the “all clear” email! hit send to all our stakeholders!
tomorrow we will return to our closed doors and whiteboards
comforted by all we’re sure we do. focused on how more unites us
than divides. convinced— eyes closed— we’re all pretty much the same.