The Accident of Birth \ Roxana Cazan 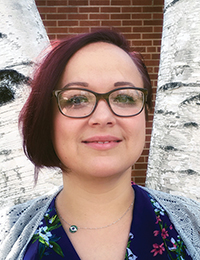 Roxana L. Cazan is an Assistant Professor of English at Saint Francis University in Pennsylvania, where she teaches world and postcolonial literature and creative writing. As a Romanian translator her translation of Matei Vişniec’s “Teeth” was nominated for a Pushcart Prize by Sojourn Journal. Her poems have been featured in Adanna Literary Journal, Watershed Review, Pennsylvania Literary Journal, Barnwood International Poetry Magazine, The Innesfree Journal of Poetry, Tipton Poetry Review, and The Portland Review (among others). In her scholarly work, she is mostly interested in transnational approaches to women’s issues. Her research appeared or is forthcoming in Women’s Studies Quarterly, Studies in American Jewish Literature, and Mothers, Mothering and Globalization (Demeter Press, 2017).

From a childhood in war-torn Romania to the horrors of watching Syrians wash ashore in Europe on American news, Cazan’s The Accident of Birth “looses” language from media spin and “unnames” the reality of persons labeled refugees: starvation and rubble, stones and lentils, bones and dirt, “tongues/planted between sea/and desert.” As Jane Hirshfield wrote: “Words are not the end of thought, they are where it begins,” and Cazan’s poems speak those whose “name(s) unbecame poetry” while their homes and birthplaces, their families and histories were and are undone by war. This is news. Read this book. ~Romayne Rubinas, host of WFIU’s “The Poets Weave” and author of Then Gone (Ledge Mule Press)

In the word-stunned, world-stung poems of The Accident of Birth, Roxana Cazan brings us on her journey from a childhood in communist Romania to the daily trials and joys of making a life in small-town Pennsylvania amid “the fumes of a fracked heart.” These poems reach out with a fierce empathy toward those living in troubled landscapes. Like “tired finches who in the fig dark dusk/still have nowhere to land,” their wings keep beating. ~-Christopher Citro, The Maintenance of the Shimmy-Shammy

THE ACCIDENT OF BIRTH

I.
The accident of birth is quizzical.
Why should the jellyfish
claim immortality
but not the deer that catapults
into stale death
as quickly as the blast
injects fear
into its feeble heart?

In Sibiu, Romania,
my name wasn’t predetermined.
In the birthing room,
flooded by August light,
another woman traded
baby names with my mother.

Like a fruit shaken early
from its ebbing tree
and caught in a red apron,
my name landed
in my mother’s cupped palms.

It could have been Nora, Alina,
or perhaps even Mariana,
exotic enough to be colonized
like drops of amber,
craving estuary and gull calls,
podded, hardened and palmed
around ants’ chitin traces.

When I entered the world,
Communism had pounced
on my parents’ household
like a beast blunting uncertainty
with an iron fist.

I walked to school
wearing the house key
around my neck.

Its metal taste
hung onto my tongue
like a young bat.

I recited hymns with pious pride,
my ochre vinyl bookcase
propped steadily at my feet.

I waited in long lines
for bread and giblets,
earnestness pounding
at the fuselage of hunger.

Outside my school,
I met a man who lured children
into his red car,
and when he had them captive
the way flies stick
to a crisp glue-ribbon,
he’d cripple them
with the sight
of his exposed,
callow penis.

To my Carpathian ears,
saffron is a yellow
stone studded
in the bed of gifted earrings.

The brittle fragrance of sandalwood
never frayed from burnt incense
over my boney limbs.

I never leafed with patience
through the story of Ishmael
bathing in the well of Beerlahairoi
from left to right.

I was never called dirty bitch
in an airport terminal
while folding a prayer rug
in my carryon
to fit it better
between newly bought novels.

I nurture a Latin tongue
except for a bunch of sprouting buds
meant to taste Levantine chutneys.

II.
On August 26, 1980,
a girl was born
in the Al-Quds Hospital
in Aleppo, Syria,
the same hospital
that plummeted into debris
by a misguided air strike
only yesterday.
Saddened by the development
of events,
the girl
became a poet,
while her name
unbecame poetry.

THE SEA SINGS FOR THE REFUGEES

Thirty people survived the wet and cold
at her pelagic breast. They suckled
her colostrum and grew stronger
by moonlit night.

In shallow water, they undid
each other’s life-vests
purchased in cafes
on the other side of the sea.
Newborns readying themselves
for ritual.

Their necks hurt from keeping
their heads afloat,
thirty buoys with burning eyes
like fire locked in a Promethean stem.

She offered them the curve of her hip
the stretch of hairless coastline,
like a woman welcoming a new birth.
Her running waters quenched
their thirst,
soothed their desert throats
coarse with the sands of Kobani.

The shore pulled them
out of the waters
poisoned with war,
with the greed for sleek petroleum,
a venomous law.

The shore was a sea-born fisherman.
hooking everyone
by a tinsel dream,
varnishing with cuttlefish purpura
the murmurs on their tongues,
“I don’t want to kill.
I don’t want to be killed.”

It’s like this:
a red palm stretches across my chest
like a blanket of ivy,
and I cannot breathe.

My mouth wants to open
in a gasp, like a whale
whining at the news of her death,
but I cannot move a lip.

She was beautiful her entire life.

A wedding, a new car, a bag of ripe
tomatoes, and the same smile survives
the golden dust of age,
the dog eared photographs.

There’s very loud music before the news of cancer
and then the feeling of emptiness
in the pit of the stomach
like a chasm deep in the sea.

I squirm
in the tightness of the sheets,
and my throat hurts
as if I swallow thorns.

She combs through my hair with her
thin fingers like knitting needles,
and says, “you worry too much.”

Tomorrow is another school day
and I am already wearing my crisp blue dress.

A cold gust of wind seeps into my bones
like a slap of a palm across the face.

I am lost in a backyard among stories,
broken tractors, rusted sickles,
and the news just hit from the sky.

I call her by her name
and the night’s sky echoes.