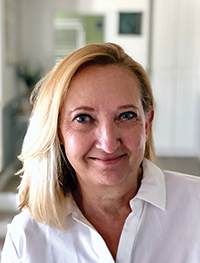 Mary Copeland is an Associate Professor at Valley College in San Bernardino, California where she teaches English, Literature and Creative Writing. She holds an M.F.A. in poetry from the University of California at Riverside. Her work has appeared in number of literary journals, including Spillway, Pearl and The Sulphur River Review.

This book of poems is about voice, one voice that transverses the classroom, church rooms in hell, kitchen and Elton John, and trickiness of text messages and ketchup as languages for love to find always the sublime and profound just outside the view. In one poem, the speaker mentions, “new narratives that might blossom into legend” and reading these poems forces a deep rumination on the small intimate pieces of a life that when put together and uttered by the Copeland’s poetry, create a kaleidoscope of wonder. ~Nikia Chaney, Inlandia Literary Laureate, 2016-2018, author of Us Mouth

Mary Copeland has a talent for lifting the otherwise mundane to the level of the sublime and thus lend meaning to, and appreciation of, everyday life. Her poetry is accessible, challenging the reader to understand not just with the mind but also with the heart. I read and reread her works for the sheer joy of experiencing them. ~Horace Alexander, author of Moon Over Port Royal.

You don’t know me, but you have been inside me.
Letter from Stanford rape victim addressing the rapist in court

In a tropical rainforest in northern Belize,
my daughter unearths history: prized ceramic shards
wrested from a sink hole, then sifted, strained and washed
until they confess their secrets.

Each piece a record of the Mayan women who carried
fresh water to their children, pressing the cold clay
to their foreheads when even the sun violated
the dense tangle of trees.

How fearless these women, fending off the jaguar
that came at midnight for their children, dodging
the coral snake’s venomous bite, or sleeping at the
base of red mangroves with one open eye.

And they were smart, these women, inscribing their gods,
the stars, their lovers, on vessels and basins,
clay autobiographies written with obsidian blades
cut of limestone and flint.

But even these fierce warriors, these women of fire,
of dark, beautiful bodies wrapped in jade and orange tattoos
could not stop the coming of Spanish explorers,
lapping at their island shores like dogs.

And now I wonder what my daughter’s daughters
will exhume 500 years from now. A basilica of bones
and rare relics, mysteries of women
who were once conquered and then vanished.

She says the older generation should just
get over it, as if it were the flu, a lost key,
a broken heart. If only it was that simple.

Because I too, want to embrace this new
meaning, the last syllable voiced without
the r that suggests brother or friend. And

like any amateur lexicographer, I welcome
letters on the page that fuse sound, tremble
off the lips and tongue, create music.

Look at the n, soft like the color blue,
a pillow to sleep on. See how the dangling
g’s swing like twin gymnasts, show a little muscle.

I could tell her that behind every word
is a history fastened to a civilization’s rise
or fall, a kingdom overthrown, migrations

of those looking for land, food, their God.
But she knows that. I might tell her the word
is believed to have come from the classical

Latin, meaning beautiful black stone, but
somewhere mid-18th century, it was
swallowed, chewed up, and spit back out

like rotten meat. I might say that history
matters, but instead I am silent, because
I understand her theory: that language,

like the seasons, transforms over time,
becomes fluid, like winter’s dissolving ice,
the slush melting into streams and carried,
in time, to the sea, where it feeds the angelfish and shark alike.

~A student passing by my office

September. The season of batshit,
the season students swing a litany of unfamiliar language
through the halls like grand slams headed
for the bleachers.
The words are packaged in phrases like
Ballin, killin’ it, on fleek, bae
tight, goat, and snatched,
forcing me to translate, construct some meaning.

Then there is batshit.

I wonder if they know batshit is actually a prized fertilizer
used for centuries by farmers all over the world
that it is so rich in nutrients
farmers in Argentina and Brazil pay premium prices,
that Peru and Chile once went to war over it
and the ancient Inca Empire considered it sacred?

Shit alone is uncomplicated.
There is bullshit, chicken shit or shithead.
Life can be shitty or you can just be shit
out of luck.

But pair bat and shit
and you’ve created a state of the art word
that is supposed to mean lunatic or idiotic
but in reality it is something
that nourishes the soil
a balm for the earth
that turns dirt into a healer
and everything planted in it
reaches for the sun.