The Best of the World’s Worst Poetry

Every book should have an introduction, preferably by some Eminent Literary Personage who will give it some gravitas and, one hopes, a touch of class.

So one of the things you, as an author, must do is find some well-regarded fellow writer who likes you and/or respects your work. Or, if that fails, you can seek out some moderately well-thought-of person who is willing to do you a favor, possibly for money. And failing that, unless you’re a total loser nobody wants his name associated with, some hack will be desperate enough for a blurb for his book to be willing to write you one in exchange.

Here is my introduction. I wrote it myself.

So my point is, if I am understanding myself correctly, that I wrote what is known as, in the technical jargon of semi-professional journalism, a shitload of columns.

The column was called “OutFront,” a name I didn’t choose. The name made some sense at first, because at first the column was on the front of the “Living” section every day (I was referred to as a “Living columnist,” which caused readers to wonder whether the paper also had some dead ones. I won’t name any names, but in my opinion, it did. The “Living columnist” appellation also caused me to wonder loudly why they didn’t pay me a Living wage.)

It wasn’t all glamor. I did hard-nosed, gut-busting investigative humor. I don’t know how many times I was called out in the middle of the night to cover late-breaking humor, often in low bars with sleazy women. Or behind sleazy bars with low women. Or with low, sleazy women behind bars.

My column was populated by an unusual cast of characters:

My pal Heppel, who sometimes seemed like my alter ego, always getting involved with the wrong women.

OutFront University archeologist Robin Graves, who, in Egypt’s Valley of the Jacks or Better (two valleys over from the Valley of the Kings) unearthed the Temple of Spameses, the ancient god of lunch meat, and his consort, Spammy Faye.

The Ol’ Mail Bag, the elderly postal worker who, in the days before e-mail, used to drag heavy sacks of fan mail up the 647 steps to Stately OutFront Manor, in the trendy Crackhaven section of the city. I never knew who got more tired, her from dragging the sacks, or me from writing the fan mail.

And, of course, private eye Humphrey Buggart, who, when his name was confused with the actor, would explain that “It’s spelled the same, only with different letters.”

There also was diarist Velvel Peeps (pronounced “Pepys”) who died tragically when a supermarket kiwi fruit display collapsed and he was tickled to death.

Which reminds me of the OutFront Endangered Feces list, which kept track of rare and exotic animals whose feces were in danger of becoming exstinked.

Animals like the kiwi, hunted to the brink of extinction for the fruit and shoe polish it gives; the American slim jim, a land eel of the sausage family; the mo, prized for its hair; and the corn dog, which, despite tragically being born with only one leg, is the noblest of all dogs, feeding the hand that bites it.

Oh, the work was hard, but I had to keep going because, as I sometimes pointed out, I was the sole support of my widowed mother and father. But through it all, I always had the heart of a poet (in a jar on my desk). So besides the jokes, I also wrote, to the dismay of many, poetry.

And over the years my poems began to generate more and more buzz—letters, phone calls and e-mails. But I kept writing them anyway, and now I’ve decided to collect some of the least-abominable ones in book form. This is that book.
Treat it gently, dear reader, and remember, the person who bought it for you (I assume nobody would actually buy it for himself) probably meant well. 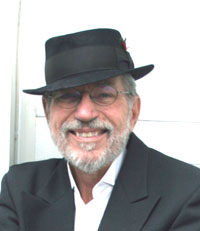 Doug Robarchek spent 44 years in newspapering, working at papers in Nebraska, Kansas, Texas, Massachusetts, California, Pennsylvania and Florida before coming to the Charlotte Observer in 1980.

He wrote the OutFront column in the Observer from 1986 until his retirement in 2005. He was voted Charlotte’s best columnist “about a dozen times” by the readers of Creative Loafing, and also was named Best Columnist three times by the National Society of Newspaper Columnists, among many other awards.

He is divorced, lives in Charlotte and spends a lot of his time traveling.

“The finest achievement in the field of letters.” — William Shakespeare.

“It’s why I invented the gadget.” — Johannes Gutenberg.

“It shines with a hard, gemlike flame. It will never die.” — Socrates.

“It makes me hot.” — Brandi, from Leather and Lace.

“It’s what I wish I had done with my life.” — Mother Teresa.

“I laughed so dang hard I like to crapped myself.” — Mohandas Gandhi.

“It’s like, you know, Picasso with words, except, like, the noses are in the right place.” — Daniel Webster.

Alabamians Scarlett and Rhett (”Stonewall”) Land,
After threats, ultimata and snarls,
Were at last reconciled to a name for their child,
A son, whom they dubbed “Richard Charles.”
Young master Richard grew gracious and grand,
Fair of face and as bright as could be,
But a character flaw would destroy the boy (aww):
He was hopelessly hooked on TV.
His mind soaked up Regis to damage egregious,
As his folks (I was told secondhand)
Issued piteous cries to avert his poor eyes:
”Look away, look away, look away, Dick C. Land.”

“I love you, Wally,” Polly said.
“I’ll love you all my life.”
“Oh golly, Polly,” Wally said,
“Oh won’t you be my wife?”
So they married (ah, sweet folly!)
In the jolly month of May,
With a bridal wreath of holly,
From the bridesmaid, Fairy Fay.
They took a house in Raleigh,
Down on Old Loblolly Way:
Now (hot tamale!) Polly and Wally
Doodle all the day.

FROM: National Organization for Monitoring Odes, Rhymes and Elegies (NOMORE)

We’ve warned you before of repeat violations.
We’ve pulled your poems over and issued citations.
We’ve introduced bills in the state legislature
To arrest and convict you of rhymes against nature.
Still you litter the paper with licentious loads
Of substandard sonnets and odious odes.
You’re there every morning like some kind of curse,
Despoiling our day with another per-verse.
So we’re telling you clearly, and not in a wry sense,
We are hereby revoking your poetic license.

Could this make a country song?

NOW How Much Would I Pay?

I’m watchin’ late-night TV, dear,
And ever’thing they do,
And even all the ads I hear
Just make me think of you.
Love’s like a Vege-Matic
That can julienne or mince you;
My heart is hard, but you cut up
That sucker like a Ginsu.
You set my brain a-whirlin’
Like a giant salad spinner,
I’m reelin’ so, I cain’t Po-peel
The taters for my dinner.

Are all your friendly operators brightly standing by?
Are all your phone lines open and toll-free?
Will you gladly fill my order in the order it’s received?
And darlin’, will you ship and handle me?
You are my Pocket Fisherman,
The angler in my Wranglers,
Your touch’ll take my breath away
Just like the Boston Strangler’s.
You unplugged Mr. Microphone
And throwed me like a bronco,
And now I’m tryin’ all alone
To order love from Ronco.