The Book of the Unclaimed Dead / Alejandro Escudé 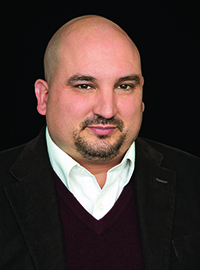 Alejandro Escudé’s received a master’s degree in creative writing from UC Davis and, among many other journals, his poems have appeared in California Quarterly, The Main Street Rag, New Verse News, Phoebe, Poet Lore, Rattle, Tuck Magazine and various anthologies. His first book of poems, My Earthbound Eye, won the 2012 Sacramento Poetry Center Award and was published in September 2013. Alejandro has taught English at the secondary level for nearly twenty years. Originally from Córdoba, Argentina, he immigrated to California at the age of six and lives in Los Angeles. In his spare time, he enjoys birding and nature photography, spending time with his six-year-old daughter, and playing golf with his father and eleven-year-old son.

Alejandro Escudé channels César Vallejo’s spirit into the unspeakable chaos of Trump’s America. We need both poets’ fierce righteousness and keen tenderness now more than ever. Escudé takes us from the streets of 1970s Argentina to the shooting ranges of Los Angeles circa now, detouring through some semi-literal realms which “surreal” only begins to describe. Pace William Carlos Williams, The Book of the Unclaimed Dead proves that poetry and today’s newspaper aren’t mutually exclusive. ~Eric Gudas

In the unopened aisles of the Holocaust museum
there is a sense that we are trapped, all humanity,
within the sacredness of the evildoer. Lined
by rows, numbers, the yellow stars affixed to glass.
Interactive guest book: they tell us to write our names. Some do.
But no one sneaks a glance up, where the sun lurks
among the black cloth uniforms. The deathly swastika.
Hitler said it was to be placed on a disk of white,
and that it would make a great poster. Quite like
my own teenage posters of Iron Maiden, that monster,
the way it too stomped over a field of human skulls.
Atrocious. One could say. The thin bodies we are familiar
with by now—like the images of helicopters traversing
Vietnamese jungles. No thought to the spillage, the moth
that flew from mouth to mouth in the bare morning.

The Miracle of Life

The astronomer says the Kuiper belt
is the result of the inner planets’ gravitational pull
when they were concentrated like kids in a game of seven-up.
Then that sudden energy was all released
so that now it is way out there, past Uranus and Triton,
where Pluto’s been now relegated to the status of dwarf.
The scientists say it’s proof of life’s precariousness on Earth.
Cheetah, Velociraptor, Mouse, and the bushtits that migrate
like tiny buffalos with wings from one tree to another.
Can’t one think of it like a lottery ticket? No matter the odds,
one person usually wins, if not in the first drawing, then in the third
or fourth, some lucky schmuck wakes up to a life of no work,
no bills, no purpose. Why can’t the same be said for sentience?
If it happened once, even once, it can happen again—maybe it hasn’t
happened yet, but somewhere beyond the Kuiper belt
a few extraordinary circumstances have come together.
Like when I first met my wife, Jennifer, in the Catholic high school,
or go back a little ways to the day those two gang members
climbed over the chain link of my public junior high to drag a student
out of our class and shank him. Mrs. Haddad shrieked for the police
as all of us, my best friend, the one blonde girl I had a crush on,
stared in disbelief as the little kid held back the blood.
The sirens came fast, as if they already knew it would happen,
as if the miracle of death was just as miraculous as the miracle of life.
Like two wandering asteroids, the two gangsters sprang out
into the school’s expansive yard and took to the track
as if there had been some giant explosion at the beginning of it all
and nothing was holding them back, throwing up sparkling gang signs
with their hands as they ran further into the darkness.

The Book of the Unclaimed Dead

The bones are stacked in boxes to be ground up
and mixed with the rest of the bodies’ ashes.
The workers at the crematorium use long poles
to push the bodies into the furnace, and a book is kept.
What jolts one are the infants and the stillborn:

Their ashes are placed in paper bags, then filed in a metal drawer,
as in a library card catalog, under fluorescent lighting.
a long, inharmonious squeak to open it.
Some relatives are only interested in the certificate.
One worker warns, from the shores of the Styx,
“Just keep in touch, you don’t have to forgive.”

The man who keeps the book says he feels it is a service,
something akin to love. He’s past retirement but loves his job.
He says his son will claim his ashes.
That’s important, that word, to be claimed.

Sometimes the usual bookkeeper goes on vacation
and another person has to record the names.
At least six names to number and spell out every day.

The book starts in 1896. That book, the oldest one, is very thin.
As if death had later hit a boom, an industrial surge
in the heavens, calling more souls to the fill its stations.

The books are kept in a church-like room,
but the bones in the boxes form only accidental crosses.
The body is simply wrapped in a white sheet
that will not survive the holy imprint of a face.

Workers heave the white figures into the furnace.
The 2011’s are set to be buried in a mass grave.
All those tiny packages and boxes, three-lined addresses,
bound up manuscripts, tracked but unclaimed.

The English Teacher Who Mistook a Clock for a Bomb

Be sure it would happen in the middle of a lesson.
The kid’s backpack would beep and your head
would fill with the worst cases, because that’s what
education is, if you’re not careful, a collection
of worst cases, in your mind, your whirling mind
that does not sleep with sleep, a consciousness
like the Reagan era, perpetually waiting to tuck itself
under a desk, blood splattering over the sleepy
early afternoon windows. You understand the parent
who comes dropping blame-bombs, the principal
who dismantles them, the moon-goth-rape-scab
that’s left by the one teen always waiting to pounce
on the simplest of statements, to make mincemeat
out of something like rhetorical questions should rarely
be used in essays. So when you heard the beep
you didn’t really panic as much as go to sleep,
as if the ticking of the homemade clock was
the scratch-language of the dead and disrespected.
Your colleague? The one that told the Muslim boy
not to show the clock to other teachers? He too,
plagued by political myth-trolls, hounded by
creditors, flicking off every work year like
a man flicking a lighter yet never quiet, striking
the American flame. No bomb, that’s for sure,
only a name, a victimized name, and a policeman
prying too deeply into motive—the empty chair
the boy left, the gadget and you, the teacher who
mistook a clock for a bomb. We place you in a tomb.