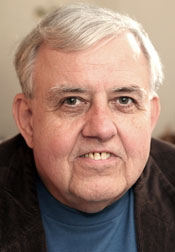 Michael Wurster was born in Moline, Illinois, and has lived in Iowa, Virginia and Pennsylvania. He currently resides in Pittsburgh with his two Siamese cats, Clea and Hawthorne. He is a founding member of Pittsburgh Poetry Exchange and teaches at Pittsburgh Center for the Arts School. His two previous poetry collections are The Cruelty of the Desert (Cottage Wordsmiths, 1989) and The Snake Charmer’s Daughter (ELEMENOPE, 2000). He is co-editor, with Judith R. Robinson, of the anthology Along These Rivers: Poetry & Photography from Pittsburgh (Quadrant Press, 2008). In 1996, Wurster was an inaugural recipient of a Pittsburgh Magazine Harry Schwalb Excellence in the Arts Award for his contributions to poetry and the community.

Michael Wurster’s terse but compassionate lines sparkle, lament, rejoice, and despair as he focuses on the diverse threads that stitch our lives. Wurster’s is a voice you won’t soon forget-edgy, yet shaped by supreme control of his craft-as if Magritte and Olivier had, in the underbreath of these poems, somehow joined forces.

The power of what’s not said. The guide who doesn’t use maps. The power of what’s almost forgotten. How does Michael Wurster catch us so unprepared, make us stop everything and look up, wonder aloud with him, and marvel us with just words? How does he do it? This collection is more than you can ever imagine. Read it.

The dead artist sprawled
under a cactus tree at the edge of the town.

Scrawled on his tablet:
“I enclose and possess all creation
–open my doors!”

In the distance
near the horizon,
horsemen riding away.

Pittsburgh Is My City

Pat and I are in O’Rourke’s;
we’re not married yet.

Through the big window
I see John Metcalfe pass by,
hail him in.

John tells us he’s been promoted,
a poet supervising 27 people!

I get John to tell Pat
the story about Henry Miller and the duck,
a Paris story.

We drop John at Oakland Square, turn
down Fifth Avenue toward the Birmingham
Bridge. It is a cold January night.
My car is a dark color, dark blue,
an Oldsmobile.

This is my city. I am at home here.

Through the afternoon
while I slept
you wrote and drew
on the frosted living room
windows
with your finger.

Dieter had already moved
to Marchand Street
where he froze.

That night
Minutello’s was like
an end of the world party.
All the restaurants
were closed
except in hotels.

Later in the bar
at Howard Johnson’s
you and Anna Marie talked;
I watched the Golden Globe Awards
and Raymond Burr
on the big screen.

Our lives were so tentative then.

Raw flesh. Burning.
A black pool full of black water.
A pound of hamburger buried in the dark.

The whole thing was ennobling,
its quivering carcass, its longdrawn death
coughing out our used-up names.

We stood in a blizzard
near Spotsylvania Courthouse,
my mother and I, calling
“Laady, Laaady!”

The fire of childhood, unhealed scars
bolted with life. I told him
if he ever hit me like that again
I’d kill him.