The Burial of Anyce Shepherd 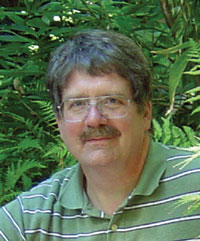 JS Absher has been an offset printer, missionary, bank teller, janitor, consultant, and collector of quotations, sold mutual funds, surveyed scrub timberland, and taught freshman English. He currently works in corporate compliance and ethics. His website is JSAbsher.bluedomino.com. He is the father of one son, a graduate student in math at North Carolina State University.

At Cranberry Church
No one now knows much about it.
Why they came to the mountains.
Some had the taste of land in their craw.
Some a bone in their foot.

One hanged a renegade in his barn,
came here after skulking in Tennessee.
From Mulberry Creek he saw these hills
sulled up against the sky (he might

have said it) like a team of balky mules.
Dead before my story, his genes
have brought me here, to the cut edge
of the grave. Beside me the son

who tumbled through a hatch
on the way to break his clavicle
and never made it to war. Falling,
he remembered standing sardined

with the sailors to eat one handed,
thus learning to hate the officers.
The goat bone they patched him up with
rides so near the tongue

his thirst is permanent. By him
stands a couple—arm in arm, though just
divorcing. Stupefied by what
they’ve done and are going to do,

they walk up to the brink,
for love. To come so far, we’ve waitressed
and kept house. Laid brick
on brick. Bought and sold sheet

metal and mutual funds. Untangled
stutterers’ tongues and taken
long counts against depression.
We lay her to rest in the flying snow.

When it’s my time, says the son,
I’ll piss on the fire and call the dogs.

In May of ’21 Anyce Irwin
in a beaded dress of sheer green gauze
met Charley Shepherd beneath bright heaven
to marry their sorrows and joys.

She’d play hymns on the piano,
he’d sing of the cross and cry.
He’d play his banjo southpaw,
the devil’s fire in his eye,

for the couples who threaded a circle
out the store room door to the moonlight,
hands high, feet in a whirl
through the front room door back to lamplight.

The babies came. He patted her belly.
Built a store, made deputy.
She sold the groceries, crocheted doilies
pretty as flowering elderberry.

Blessings flowed down thick and fierce,
raising Anyce nigh to heaven’s
jealous love that burns and pierces.
She kept her own heart hidden.
ii.
In the warmth of one mid-April,
the sun hung sweet as a pear
when a hard worker of good character
(as seven white men would swear)—

Maxwell, that Shepherd had given credit
and sometimes hired—
three times loaded his shot,
three times aimed and fired,

struck Shepherd down in the garden
while his mother looked around:
shot him once as he tried to run,
twice as he lay on the ground

surprised to see those little holes
bunched in his side like grapes,
neighbors running and birds flying
into darker and darker shapes.

Under his head he felt
a moving mouth of dirt,
its gravelly tongue and throat
watering at his hurt.
iii.
Folks talked. Deputy Shepherd
had knocked down Maxwell’s son
with an axe that weighed four pound,
or with the butt of his gun

had knocked him off his nag,
or pushed him backwards into a ditch
to shake off a drunken hug,
had called him son of a bitch,

and the boy had gone to Daddy,
his shirt torn and bloody,
Maxwell had got his gun
or borrowed one from a buddy,

found poor Charley with a hoe
chopping the lambsquarter
as innocent as Adam
setting his garden to order,

struck him down as he worked,
while his mama looked around:
shot him twice as he tried to run,
once bleeding on the ground.

Those who looked for truth
found it where they looked,
colored to make their hearts beat hard
and trigger fingers crook.

Arm of Law and Legs of Flesh

Come, ride into Sweet Hollow,
refuge from buckra, black
reef battered by froth.
On the steps a blue-tailed skink,

on horseback hands with blue barreled guns.
Cursing and stamping behind a door.
Weeping behind a tree.
They arrest Maxwell’s son and go,

two hundred men and a bloodhound pack
through greening hollows and meadows.
Run Maxwell to ground near Galax
in a field cleansed by fire and snow.