The Cinnamon of Desire 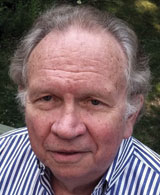 A seventh generation Pittsburgher, Jay Carson teaches creative writing, literature, and rhetoric at Robert Morris University, where he is a University Professor and a faculty advisor to the student literary journal, Rune. Active professionally, Jay regularly presents, reads, and publishes in local and national venues. More than 60 of his poems have appeared in national literary journals, magazines, and anthologies. He has also co-edited with Judith Robinson a collection of Margaret Menamin’s poetry entitled, The Snow Falls Up. In addition to Cinnamon of Desire, Jay has published a chap book, Irish Coffee, with Coal Hill Review. Jay considers his poetry Appalachian, Irish, accessible, and the problem-solving spiritual survival of a raging, youth — and just what you might need.

A truthful poet engages your feelings without sparing them. Jay Carson does just that in this brave and totally authentic book. He never flinches–even when the truth becomes brutal, as in some of the family poems. But that enables you to appreciate the remarkable love poems in the third and central part of this collection. It takes courage to write such poems, and it takes courage to read them, but the rewards are boundless. That’s why this–Carson’s first full length book–is definitely one to own, consult, read and re-read.”

In The Cinnamon of Desire, Jay Carson negotiates the streets of desire and regret with the voice of someone who has lived a life. From the speaker’s beloved corners of East Liberty to the halls of Cicero and the Roman senate, to the body of the loved one with all its frailties–Carson writes a legacy in incisive lines: Knife through these generations/cardiac board to nursery… This is a writer who knows the necessary prices of being alive–yet luxuriates in its hunger, twisted humor, and possibility just the same. Read this book!

What do you want?
The white uniformed voice feeds
my anxious sweet hunger, but iced
with the fear of women’s words.

“Them, the ones next to,” I said.
Crumb buns? You want crumb buns?
Or the flop overs, which? Her voice, knife sharp
as the red nail of her finger stabbing at the cakes.

Her ruffled pink collar, an old
poisoned plain for her mountain head;
a bumpy nose more sure than Sister Pancratious
smelling out my neck and side sweat.

But my brother warned me
of the rancid taste in feminine scented,
sweet words. And how to lower
to Bogart’s lip and tongue swagger.

I can’t give you any until you say.
Her eyes bulge at me,
like muffins rising in the tin.
Finally, timed and done, I rise.

“Crumb buns, crumb buns,”
I cry quickly, through slitted mouth,
cut open for the first of many times,
by the cinnamon of desire.

None of us were able to kill Dad,
although we did our damnedest.
My brother was the most obvious
going after the old man
with Marine ready fists.
Mother, more subtle, drinking her way
through his heart and into her sick bed
and an early grave. That almost got him.

At first, I just worked on disappointing him.
You know how football players are ruined
by repeated head injuries. Same principle.

Later, after he fell down a pair of steps, drunk,
I told him he didn’t need to go
to the hospital for that nasty old stiffness
that turned out to be a slightly broken neck.

But Dad survived. You could say won.
After all, he mixed the drinks for everybody.
And made my brother agonize guiltily till he died young.
And here he is, now, stabbing
this pen point into my eye for breaking
the Fifth Commandment.

I wondered at the furnace of love
that can fire a locket of burnt kisses,
sworn commitments, and jealousies,
all shut around a neck.

Heat that can choke out fear
of death: to hold at the throat
the hellish grit,
ashes of love.

I sometimes don’t feel close enough
to anyone, my love, to give
even a posy necklace of a devotion
that it might not outlast.

I wish, my sweet, that we could
find such love, press it so close
between us, we would fire again,
to more than a dusty frosting
on loyal throats.

RICHARD NIXON AND ME

There were terrible storms across Brazil
the TV weatherman said, and Richard Nixon’s
Press Secretary said that the President’s statement
was no longer operative, and my room mate
said you don’t have to be a weatherman . . . .

just before we moved out
in the middle of the night
to avoid the rent.
We weren’t the real crooks;
we might be drafted.

I am now in Rio,
and the warmth is forgiving.
I eat enough for a favela family
of four and throw away
enough for three more.

I imagine myself a Warsaw freedom fighter
not a Waffen SS Colonel in late 1945,
checking the plane schedules
from Berlin to here.

If you would like to read more of The Cinnamon of Desire by Jay S. Carson, order your copy today.

Be the first to review “The Cinnamon of Desire” Click here to cancel reply.