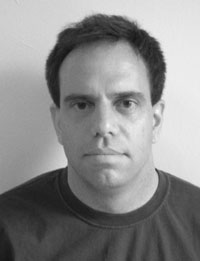 Justin Courter is the author of the novel Skunk: A Love Story, available from Omnidawn Publishing. He lives in New York City and works for the Wildlife Conservation Society.

A consumer devours himself, a junk-food addict eats from garbage cans, a titmouse lives in a woman’s bra: there is a demented literal-mindedness to these funny, fast-paced prose poems that turns the world inside out and reveals every smidgen of its goofy, delicious splendor.

The Death of the Poem is one of the most entertaining, witty, surprising books I’ve read in years. It’s also, in the best possible way, very weird. Justin Courter’s is a world where a consumer consumes himself, arms and all; a poet dresses in blue bubble wrap and wears small boats on his feet; and an old man sits at his desk writing Russell Edson’s poems for him. “I got an idea for reality,” Courter writes at one point. “I’ll call it television. It’s a mirror with a box of brains in it.” But these poems aren’t merely winkingly surreal, but are filled with anxiety, insight, and rage, pointing always toward very real human passions and difficulties.

There was a time in this country when grandpa would have poultry hour after dinner. We would all gather round and listen to poultry. People kept rows of poultry on shelves now fowled by television. You could discuss poultry with folks in coffee shops and it wasn’t this down-and-out elitism-people were just naturally riled up about poultry. I’d often hail my hep comrades on the street by crowing, “Hey you fabulous bastards, have you heard the new poultry?” I think it all started going to feed shortly after Mr. Strand revealed that he’d been eating poultry. I saw him romping in what was the end of those and the beginning of these, these shriveled, dark days for poultry. You know it’s had its head turned, neck snapped, when it’s being sold like religion. They have poultry camps where you can pay to concentrate. Some people slam poultry and if that’s not geekinese then it’s the university where they get degrees in poultry and never stop squawking about it. I woke up one day at a poultry convention when someone said, “Can poultry matter?” I said, “I don’t know, can cornbread? And just where in the hell did I put my drink?” It’s sad. It’s as if the routine has come home to roost.

The way you doodle is just so dandy I recommend you step up to the plateau and tell the responsibility director you can’t seem to get enough work. Then take your foot, stuff it up your butt and twist and pout you stupid, spinning, half-baked soufflé. Anyway, as soon as you want a new project forget about it; it’s more likely you’re going to sing opera today at the managers’ meeting because greed is what makes the world go wherever it wants. For my own part, if that little monarch tries to try me again he’s going to have to contend with an explosion of plasma. Speak of the butterfly. Here he comes. Good morning, sir. Was just explaining company policy to poop-head here. Do you wish to manage me to death? Of course I’m upset, there’s a bit too much emotion in my coffee. Right. Excuse me, I’ll go have a word with my mirror. Hey eye-nose, you think this is some kind of life you’re living? It’s a lopsided nightmare. And when you wake up? You don’t. Face the farts for once. Pull back the blanket. It’s you.

The poem lay there on its white sheet blinking up at me. Enter me, she said. I beg your policy, I said, but I thought you were in for an autopsy. Oh hear of my sad flowered childhood, she sang, I have witnessed such terrible blooming silences in the poesy garden. The poem began to weep. Delirium trellisis? I wondered aloud. Post-deracination disorder? Dance with me you fascist father figurine! the poem shrieked, though she stretched no rosy-fingered figment of her celebration in my direction. I heartily regret to diagnose you as a hipless and lipless old sack of Cinderella who has become a legend in her own line, I said. You were to love me, she said weakly, her rhetorical flame on the fritz. She was so limpid and anemic I discovered it impossible not to say, Hang in there-we’ll see what we can do. We? the poem barely managed to breathe, lizardly assuming the color of paper. Yes, we, I said, and felt my heart coming out from under the hippocampus oath. I love you, I said. A droplet fell from my face and made a round wrinkle on her sheet. Wiping my eyes with a handful of blankets, I began to repeat, I love- but she was her story. Never to be mine. I was just talking to blankness to console myself.