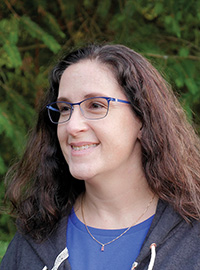 Stephanie L. Harper grew up in California, attended college in Iowa and Germany, completed graduate studies and gave birth to her first child in Wisconsin, and lives with her family in Oregon. She is a Pushcart Prize nominee, and author of the chapbooks, This Being Done (Finishing Line Press) and The Death’s-Head’s Testament (Main Street Rag). Her poems appear in such journals and anthologies as Slippery Elm Literary Journal, Isacoustic*, Rat’s Ass Review, Panoply, Underfoot Poetry, Stories that Need to Be Told (TulipTree Publishing, LLC), Quoth the Raven (Camden Park Press), and elsewhere.

Deeply personal, always universal, these poems astonish us with their sonically rich, muscular language, searing honesty, fierce observations and lines laced with subtle humor and a piercing intellect. Above all, Stephanie L. Harper sounds like no one else. Her work burrows into our psyches, and even the most casual-sounding piece worms its way deep within. The Death’s-Head’s Testament, her second collection, confirms the promise of This Being Done. It is a book to be savored. ~Robert Okaji, author of From Every Moment a Second

A compelling and transformative must-read! These fiercely intelligent – yet accessible – poems will wake you to your life and “to the light/by which darkness must be defined”. Stephanie Harper is passionately present to her inner and outer lives, her family and country. “Moon Cake” ends the book: “the precious girl I brought into the world/has a dad who can give her the moon”. These poems reward with each rereading: we too are given the moon.  ~Lynne Burnett

i’m no kind of Ishmael to expound
some great protagonist’s wayward saga,

& haven’t the slightest inkling of other

women’s misfortunes, nor do i know
if i’m even justified in such grief over a life
squandered on an endless vigil’s cries of
who sees me now? & now? & now?

who, besides this mirror i face,
knows my bulging litany of failures,
my spurious assumption of a character i detest?

i was born lacking the power
to reason my way out of this gravitational
force i’ve abhorred since youth, & which
now condemns me to lug about my globed
satellites—

to bear these adjuncts’ fleshy heft, as if I were
still umbilically moored to the gangway by my own
murdered albatross—

each a whale of white with its vacant eye
downcast like a faded damask rose.

Even when you are a one-year-old jumping out of your crib
(you have no particular reason for jumping, but you do it,
& the thud you make that’s loud but doesn’t hurt,
wakes your father, the menacing resonance of whose
footsteps approaching your room overwhelms you with terror—
your own heartbeat surging in your head—which you catalogue
into your infant consciousness as a sense of mortal danger
you will run from for the rest of your life, though you have no
language to account for it yet), you already implicitly understand
that your fear is a thing you must never talk about out loud, for
the only way its malaise living in your veins could feel worse,
would be if the words you formulated & ascribed to its being
resulted in its summary negation.

For the same, essential reason,
you still hardly believe the amazing thing that happened to you
one day, back when you were a burned-out Graduate Assistant
(who couldn’t have distinguished a metaphysical marvel from
her left elbow)—when, because your arms were overfull with books,
an orangutan puppet named Andreas, & his overripe, over-handled
banana, which you’d recruited to teach German reflexive verbs
to Undergrads, you decided to take the elevator back up from your
third floor classroom to your eighth floor office in Van Hise,
& discovered yourself being flanked for five flights by two
Tibetan Buddhist Monks in their maroon & saffron-yellow robes:
Geshe Sopa, whom you recognized from the Asian Studies Department
on the twelfth floor, & his brightly-smiling companion, none other than
His Holiness the Dalai Lama—even though you’ll never forget how
Andreas clasped his banana, while you summarily exited your body
on a silent wave of preternatural warmth, the mouth of the thing
you would never again inhabit fixing itself into a ridiculous grin.

For my part, I think it’s entirely possible that I’ve been a bodiless soul
since infancy, & also that I never did actually receive a new life from
the Dalai Lama in an elevator in Wisconsin, but I cannot say for certain.

The Hobgoblin’s Guide to Indemnity

Once upon a time,
there was a family with a boy my age
who moved in next door to me.

Today, I make-believe
those weeds into having been proxies
for the bigots that were rooted in our community’s
cul-de-sacs like neoplastic glands
we somehow thought better to ignore,

though they oozed like white cream
heaving from a cleaved Twinkie;

though they crept about in the cover of night
defacing properties with gasoline crosses,
as if to exorcise some incognito beast that might be
masquerading as an innocent third-grader—
a ritual they performed on my neighbors’ front lawn
one night in 1979;

though the adults filed a police report,
declining in hushed tones to speculate
as to the perpetrators’ identities,
& hatched half-baked designs for disguising the scars
with green food coloring;

because, before I was through elementary school,
I’d already made an art-form of refusing
to be fazed by most breaches of common decency:

Forged in the foundry of public ridicule
(where, once upon a time, a girl paid for her crime
of playing Little League Baseball), fueled by
such combustibles as my schoolmates & their parents
knocking back hi-balls in the bleachers would purvey,
ranging from preamble conjectures as to the nature
of the equipage my corduroys concealed, to the more
explicit indictments of my supposed prick-teasing wiles
that inclined toward physical & sexual assaults—

my cast-iron answer to the question of insult
was no different
(of this I was convinced)
from my response to the astonishing burn
my friend’s fastballs seared into my glove-hand,

that no matter how much it stung, I could take it…

The time my friend’s mom spent nine hours
taming my tawny wisps into cornrows, I took
her twist-tugging resolve for a tenderness I craved;

& when I sported my new, sunburned nakedness
adorned in shiny beads at the ballfield,
I took the prepubescent boys’ inspired torments
deep into the heat of my belly, billowed white
like cumulonimbus gorging on the afternoon sun,
& engulfed the horizon.

Once upon a time, I took everything,
assuming it was mine to take.

Only now as I watch my country bend
before an onslaught of crackpot fascists
like a Floridian palm in a hurricane,
does it strike me to wonder about the light
my best childhood friend must cast
on his memories of me—

if he recounts in his version of our ever after
how we’d laugh-sputter milk from our noses
at an ad hoc Looney Toons riff, or how
I’d cap-off my Foghorn Leghorn renditions
with their signature disclaimer:
That was a joke, Son, I say, a joke!

of that fairytale world
where, once upon a time,

that giant, white cock on T.V.
was a cartoon chicken who lived in a barnyard,
far, far away.