The Elegance of the Ungraspable

Don Mager’s first poem in print was in 1962 in the Drake University literary magazine Periphery. Later as editor, he wrote in one issue, “Peripheral vision reaches out beyond the immediate focal point, bringing an awareness of space, color and movement that is vital, if not always central, to complete visual perception” (Periphery (1964), 3).

Forty years later his poems and translations show that for him, experience embraces what lies on the edges of vision—at the borders—horizons—limits—peripheries.

Elegance Of The Ungraspable: Selected Poems from Four Decades is arranged in groups that reflect the time of their gestation. The decades foreground location as well as time: Iowa, Upstate New York, Norfolk (England), Detroit and Charlotte.

Mager is of the generation whose comprehension of the world is rooted in the starkness of Hiroshima. Nuclear build-ups, stand-offs, threats, and the cold war imposed an awareness of transience, futility and urgency. Whether running, reading, gardening, making love, or doing any other ordinary activity, the cloud of Hiroshima and its existential imperative, however dimly, hangs over almost any given day’s joys or fears, gratifications or frustrations—just as that cloud hangs over this book.

In a Czech poem that Mager translates, František Hrubín sensed that the backdrop to our earthly blunders is the elegant incommensurability of stars secure and indifferent in their cosmos. Mager too has his “old grudge” with the universe’s incommensurability and seeks to find a voice for the ungraspable. 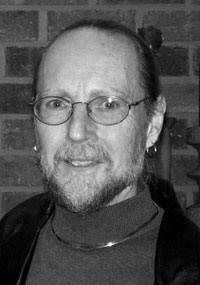 Don Mager (b. Santa Rita, NM, 1942) completed high school in Des Moines and went to Drake, where his poetry mentor was E.L.Mayo. He was among the first poets to complete the graduate writing program at Syracuse University where he studied with Delmore Schwartz, Phillip Booth and George P. Elliott.

Besides the books listed here, he has done substantial translations of Rainer Maria Rilke, Frantíšek Hrubín and Anna Akhmatova. Marc Satterwhite’s opera Akhmatova with a libretto by Mager is planned for production in spring 2004.

He is the Mott University Professor of English at Johnson C. Smith University, where he has taught since 1986. His journey between Syracuse in the mid-60s to Charlotte, included 3 years in rural England, a commune in upstate New York, and 15 years in Detroit. He has been a farm laborer, camp director for senior citizens, door-to-door interviewer, radio show host, day care center director, and human rights lobbyist on behalf of sexual minorities.

Spread through a heavy evening chill, dark
rains of April had sprung night open
with wind. Elms clawed and slammed, catapults
slashing above his car in the drive.
Waters gathered on roofs, sidewalks, lawns,
until the street flooded, blocked against
the mounded drains—all those spiraling
maple seeds herded up together.
In the kitchen where he stood, when it
struck, lightning lit with furious blue.

The guttering torrents would weaken,
he knew; lashing would have to subside.
But water would rage on while he slept
awash beneath dreams, his attic room
riding beneath caressing waters.
Indeed it was still a boy’s room for
the ruthless discarding had not yet
followed his demands to break free; but
the old, cantankerous car was his,
paid for in full, an after school job.
How does one ever break open from
all that childhood piles around?
He can give you each teacher’s name, like
marbles kept in a bleached denim bag,
first grade through the twelfth and all three subs
who came and went in the fourth grade year.

The kitchen was dark after each blue light
stroke; slowly he again saw past the thrash
of shadows. His dream of flying, of
soaring waters, lifted him—movement
toward entry. To begin is always
to leave off something else. He walked out
into the rain. The door tore from him
and slammed. Wading through grass sponge, face raised
to the storm in the wavering sky,
he strode to the lawn’s strange center, point
where sun scorches the grass in summer,
point where the shadows of three large elms
throughout the day never intersect.

The boy stood in the storm and undressed.
Water drove down his shoulders, his breath
gulped under the cold lash, hair across
his eyes, and his glasses had fallen.
Face lifted up, he drank the cold rain;
face lifted up, fury of lightning
exploded. And just as in his dream
of soaring diver-sheer over fields,
when he would wake with a bone between his
legs, or after long runs alongside
the river’s dark ice, when home beneath
the shower, his erection lay in hand
to be praised, now his blood drove downwards.

Beneath his feet, where mud and straw swirled,
deep to his ankles, a pool had formed.
He lay chest down, arms folded under.
Skin was tumultuously awake,
even grit and mud drove it wider,
while the hungry pelvis rose and plunged.
Never, time as terrible as this.
Someone may come home, he thought—forgot—
and thought again, or a car slurp down
the alley. He retrieved his glasses
from the mud. Putting them on, he turned
to the streetlight bobbing its small bloom
in the alley; a car might turn in.
No one knows I’ve done this thing, he spoke,
and no one will until I tell them.
But shall I ever sleep again? He
bundled his shoes in his clothes and went
back to the kitchen. The skin still spoke
with wide blue fury, only this time
had he been so terribly awake.

In fields that stretch between condo parks
north of Pontiac Michigan, where lakes
lap crisp lawns and children ride dirt bikes
in path mazes in the spring afternoon,
girls and boys on puberty’s crisp edge
skim across ridges of dirt mounds like
rudderless skiffs. They sail down inclines
unfurling screens of powder like gauze,
whitened with sun across the spring air.

From where I stand across the marsh grass
with blackbird sentinels on cattail
stalks, berry bright solitudes, I watch
these bikers in the voiceless distance
ride. It is a movie whose sound went
dead or a ballet through a window.
They grind up the spiraling path to
dune crests; like marsh-ducks, suddenly
they lift across the mesmerized air.

As they splash, they scatter a stiff wake
of dust. Gradually as evening
stretches to ebbing shades of red sky,
one by one their numbers ebb too, like
the blackbirds who leave their stalk perches
rustling down into marshgrass nests.
As they rode in silence, so they depart.
One last girl, her black hair streaming—wisp
of smoke behind her bent head—is left.

She sweeps around the long path bend, shifts
gears until her legs drive as fast as
fear. And up the dune crest, a dark
hawk thrown into the sunset, she hurls
across it, behind the frog-dawning
marsh. Sun catches the bike’s silver. She is
a torch. Like the spot on a blackbird
glints as it swoops to crush dragonflies,
she solos her silence. Frogs sing mine.

THE STORY BEHIND THE STORY

There is a story behind every story and the story
depends upon how you play it.
Is it a scene out of Laurel and Hardy
with irony troweled on as thick as wet plaster?
Is it the climax to a grade B movie?
Or just two grumpy old men?

It is last night’s TV news.
It is this morning’s paper’s local headline.
It is the very thing to keep ratings up.
And it is Kannapolis, North Carolina,
the right sort of small city for a story like this.

They were sixty-eight and seventy-two.
Both reporters tell us they were lifelong friends.
Neighbors say they visit each other daily.
One says they were close as brothers.
Her face is a clip for the camera.
Her drawl provides the right touch.

But a quarrel broke out.

Was it grumpiness gone too far?
A sudden eruption of unforeseen rage?
A long festering grief? A strange bitterness?
One man hits the other,
hammer-blow to the head.

Was the blow a mere warning that landed too squarely?
Or did he deliberately throw his full strength behind it?
Blood from the gash spills down the face like wine.
Eyes see red.
But what brought it on? Were they gambling?
Were they drinking? Was a woman involved?
Long distant and past, or recently arrived?
Had they themselves been lovers these many long years?

Memories sharpened by time become so keen
at last they are blades.
Money? Resentment? Politics? Shame?

With his eyes filled with blood he pulled a gun. He shoots.
Death on arrival for the man with the hammer.
Like a blown-fuse he crashes down.
Was the gun carried this day with intention to act?
To protect?
Or was it gripped in his pocket, an old custom
like rabbit’s paw, buffalo nickel?
And after his head cracks and his finger blasts,
time runs swift.
He pushes a button, another one
twice: nine one one, and speaks the facts.
He speaks all the facts. He speaks just facts.

When police arrive he is also dead.
The story behind the story is beyond the reach of shocked neighbors.
None can tell us what it is to kill your friend.
The microphone, the camera—they cannot pick it up.
The headline in the paper gets it wrong,
a scene from an improbable film.
No reporter can say what it means
when the last thing you see on this earth
through blooded eyes
is a friend’s blasted body crashed to the floor,
a hammer clutched in his old hard hand,
the veins splayed out like blue roots,
the liver spots—suddenly dark like flattened raisins.