Fallen Heroes of the Awful Waffle 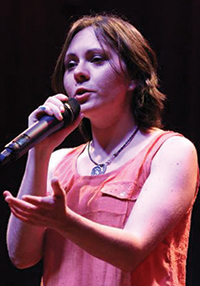 Shane Manier is a local artist and poet based in Kannapolis, NC. She is the founder of activist/outreach art collective Guerilla Poets with branches in the US and UK. As a poet and artist, she has been featured at many shows, events and venues all across North Carolina and completed many outreach programs through her work to enrich the lives of others through the arts. Her poetry is mostly known for its passion and depth and has been published in various journals and online magazines.

I know it’s been said before, but these carefully crafted poems really do sing—and vibrate and beg to be heard aloud. Shane Manier has managed in this concise volume to tell whole vivid stories that value the overlooked among us. Her words are powerful and imbued with the sorrow and joy that often governs our American nights. ~Tim Peeler

The Fallen Heroes of the Awful Waffle is the Spoon River Anthology of the Waffle House. Shane Manier beautifully captures the grit and vitality of that iconic 24 hour temple of the dispossessed and yearning, where the hungry trek for sustenance beyond mere bodily nourishment. With abiding compassion and a clairvoyant eye that peers deeply into the very core of her subjects, Manier dishes up searing unforgettable language, language to be reckoned with, and equally unforgettable characters, blazing with desire and humanity, hunched over plates as if eating last meals. This is a powerful book. ~Joseph Bathanti, NC Poet Laureate (2012-2014)

I have spent most of my adult life on the road, so the ubiquitous Waffle House is a sacred station of the Cross for me, the only hot meal for hundreds of miles. Shane Manier’s wonderfully descriptive poems are equipped with jack-in-the-box characters that pop fully formed off the page, and she treats her charges tenderly and fairly in these narratives. She has a keen fluidity and grace for a young poet, and her sentences have my mouth watering even now for a fresh conversation and some hash browns buttered, smothered and covered. ~Keith Flynn, author of Colony Collapse Disorder,  and editor of The Asheville Poetry Review

Sweet Southern Nurses,
with grease stains on their knees
pour warmth to counteract
the coldness of the street.
Tattooed with glory and grief
they’ve accepted everything
a woman has ever been called.

There’s a gap in their Mississippi mouths,
where the travelers dock on the muddy water
of their riverbed tongues.
Sluice the sweetness of their drawl,
slick as catfish.
Sing hallelujahs to the juke box
Pluck the bones of living prayers out
their teeth, say “Honey, it ain’t
nuthin’ but one them things.”

Do their sad molasses eyes
see their own beauty
in each drop of fried sweat?
In each morsel served from the road?
Each sugar sweet tea smile that makes
the Truckers feel at home?

“I’ll do what I want” Click.
The waitress flicks her hair
brushing off the phone call
from a sucker fish boyfriend.
The manager’s pregnant
fiancé behind the counter
doesn’t even flinch.
The soccer team to the left
isn’t paying attention –
they’re all business.
Neither is the seat to the right
where a couple explores
the hidden coves
of a new relationship.
Who dumped out
Hellion’s rebellions here?
It’s so calm that the buzzing
ball of light is putting up
more of a fight than us.
Is this the edge of the world?
Flat as my napkin, or is this
a poster of “Nighthawks”?
Easily a framed image
saying so much more
in its silence.

I sit waiting on truckers,
peels of asphalt to haul their

mud flapped bones in the door.
I question my coffee,

the only warm body present,
other than the staff.

A waiter who keeps asking
if I am writing about him yet.

Where is the limping
tread of life–

I swear I caught sight
of a blood trail

spiked in my hound senses.
I try to dilate my eyes

out the window but I’m
stopped by my reflection.