The Fire in Which We Burn 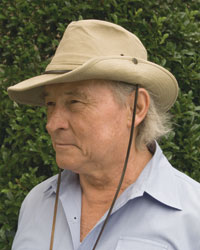 Dennis Ward Stiles grew up on a small dairy farm in northern Illinois. After graduating from the U.S. Air Force Academy in 1964, he served thirty years in the Air Force as a pilot and military diplomat. He spent much of his career overseas, with assignments or accreditation in Thailand, South Vietnam, England, Iceland, France, Egypt, the Sudan, Austria, Slovenia and Slovakia. He has published widely in journals. Palanquin Press published his chapbook, Saigon Tea, in 2000. He also has three chapbooks from Pudding House, Black Mirrors in 2003, A Strange Wind Rises in 2006 and Humdinger in 2007. He has served twice as president of The Poetry Society of South Carolina. His chapbook Spit won the society’s Kinloch Rivers Prize in 2004. He is also a former Poet in Residence at the Gibbes Museum of Art. He lives in Charleston, South Carolina, with his wife Mary Jane, and works as a hospice marketer, a tour guide and a Berlitz language instructor.

The beautifully crafted poems in Dennis Ward Stiles’ The Fire in Which We Burn take us on a journey from the innocence of childhood, through the ostensible immortality of youth, to the disparate comforts and dangers of middle age and beyond. These stages of life are, indeed, the fires in which we all burn. Anyone who has the courage and self-effacing humor to open a collection with a poem titled “An Early Experience with Sin, Judgment, Eternal Damnation and Redemption” has immediately caught my attention. Denny Stiles holds that attention in a spellbinding way until the very last word of the very last poem. A remarkable first full-length book!

The World in Which We Burn is frank, clear, warranted by a life of broad reach and emotional depth, beautiful, and fearless. Dennis Ward Stiles has a smart heart, wise to paradox. In this outstanding first full-length book, he gloriously celebrates our transitory life on earth.

AN EARLY EXPERIENCE WITH SIN, JUDGMENT
ETERNAL DAMNATION AND REDEMPTION

When I was five, my mother found the matches
behind the davenport. They were just little
dead black cripples, the smell was gone
and the wallpaper hadn’t burned
more than an inch or two
no matter how I peeled it
but all of her masks plunged down
into the earth and stuck there
like prehistoric art
and all of the birds and animals
in my mind
darted out of sight
and her face was a tunnel
of fierce white light
that led to Eskimo hell
and Arab hell
and on to a ladder that would bring us out
somewhere on the surface of the earth.

Katydids shriek, keep away
from the trees. We can kill you.
I hear them.

I rev up my Ford
drive around
with the windows open
smelling tar.

That boy on the corner
carries a knife. I’ve seen it.

I dream of kissing his sister.
I’ve been in love with her crotch
and all of its names
since before she was born.

then drive around the block
again and hunt for a station
with better music.

Headlights shove me from behind.

At the Texaco I spend $10
at the pump, check my own oil
keep low under the hood.

There’s a long night ahead.
Let me at least
start off with a full tank of gas.

First gray the hair, then the skin.
Let the bag below the left eye droop
a little deeper than the right.
Grease, powder, attitude.
Let the mirror whisper and guide.

Add soft pads around the middle.
Think, “Sag,” as you carry
your kit stage left. Make the limp
very slight. Make the time late
and multiply fatigue by age
until you stagger once, just barely

and beam through the pain.
The house paid off at last.
You got the policy. You were best
in territory, once, toasted
at banquets, eyed by easy women.

One whore can’t mean that much.
You have your boys, and all their promise.
Sell yourself back to them
to your worried wife, to the front row
and to the shadows behind the lights.

Someone’s burning money in the dark.
You grope beyond your garden
toward that good smell.