The First Kristin: The Story of a Naming / Kristin Czarnecki

The First Kristin:
The Story of a Naming 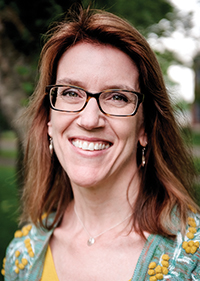 Kristin Czarnecki holds a Ph.D. from the University of Cincinnati and is Professor of English at Georgetown College. Currently, she is serving a second term as President of the International Virginia Woolf Society. She has published essays on Virginia Woolf, Jean Rhys, Louise Erdrich, Leslie Marmon Silko, Zitkala-Ša, and Samuel Beckett, among others. Her work has appeared in the Journal of Modern Literature, Journal of Feminist Scholarship, College Literature, Journal of Beckett Studies, Woolf Studies Annual, and the CEA Critic as well as in several essay collections. The First Kristin: The Story of a Naming is her first book.

What does it mean if the name we’re given carries unimaginable grief and loss? Kristin Czarnecki’s debut memoir goes far beyond just telling the story of a name—it answers the question of how we reckon with the world we find ourselves born into while also exploring what we leave behind once we’re gone. It brings the past to life in a stunning way, and its wisdom will be with me for years to come. ~Adam Clay

The First Kristin: The Story of a Naming is a lively and intelligent book on the author’s experience of being named after a deceased sister. Through personal reflection, conversations with her family, and musings on literary representations of loss and mourning, Czarnecki paints a compelling portrait of the sister she never met, her parents’ sorrow and resilience, and her own journey towards greater self-understanding. ~Lauren Elkin

She heads straight for the blue tricycle parked under the Christmas tree. In her pink and white special-occasion dress and bare feet, she pushes the trike back and forth a few times before clambering onto the seat and trying the pedals. Next, she’s sitting on the floor, opening more presents—throwing wrapping paper, tissue, and box lids over her shoulder like it’s old hat, although she’s just a toddler. She glances at the camera once or twice. Mainly, she focuses on her gifts, sometimes turning to her father for affirmation of how she should react to the bounty spread before her. Her mother films it all. (They are not yet my mother and father.) An eight-by-ten framed photograph of her sits atop a table in the background. She concentrates as she pulls the next doll or toy out of a box or bag. One of the presents is a tiny pair of flip-flops. Her dad helps her with them, fumbling a bit, putting them on the wrong feet. Christmas tree tinsel dangles in clumps from the bottom branches almost to the floor. The mountain of presents seems never-ending. It’s a bright, warm scene. I can almost smell the breakfast they’ve had, or the coffee brewing, or the turkey that may already be roasting in the oven.

I’m named after her, this child in the grainy video who died when she was three years old, eight and a half years before I was born. Until now, I’ve only seen her in small black-and-white photographs in which she seemed frozen and far, far away. Now in my forties, I’m watching her spring to life for the first time. My husband, Paul, and I watch the video on our TV; later, I’ll add it to my desktop and watch it over and over again. Now, this first time, I brace myself for what I’m about to see. I arm myself with tissues, lean forward, hold my breath. And I cry and cry.

In our family, she’s always been called the first Kristin. My parents are voracious readers who named their daughter after the heroine in Sigrid Undset’s Kristin Lavransdatter trilogy, set in medieval Norway. I find myself needing now to explore this act of naming, this legacy, this spectral sister. I feel sorry for her, robbed of life at such a young age. I even miss her sometimes, if it’s possible to miss someone you’ve never met. I want to know more about her. I want it known that she existed, that her time on earth mattered. I want to reflect on what having her name means for me and my family.

“Write what’s tearing at your heart, what you need to resolve,” Ana Castillo advises her students.

I had originally written, “I want her to know she’s not forgotten,” but as undertaker Thomas Lynch affirms, “there is nothing, once you are dead, that can be done to you or for you or with you or about you that will do you any good or any harm.” Remember, he repeats several times, “The dead don’t care.” All the same, undertakings carry tremendous significance, for they “are the things we do to vest the lives we lead against the cold, the meaningless, the void, the noisy blather, and the blinding dark.” Our undertakings, Lynch claims, “seek to make some sense of life and living, dying and the dead . . . To undertake is to bind oneself to the performance of a task, to pledge or promise to get it done.”

So I set out to perform the task of writing about the first Kristin—binding myself to this lost little girl to try to know her better, understand myself more deeply, and explore the unique phenomenon of a family with one name for two sisters. This is my pledge, my promise to her. I know she doesn’t care, that “the dead don’t care,” yet doesn’t the phrase nevertheless imbue the dead with some semblance of agency?

Kristin Lavransdatter is one of her parents’ two surviving children. As the novel opens, we learn that three brothers died in the cradle. A yet-to-be-born sister, Ulvhild, will also die. Kristin lives, however—a thriving seven-year-old as the novel begins and a headstrong young woman as the trilogy continues, determined to follow her heart even if it means risking social censure and her father’s devotion.

The word arose from my Internet searches on “naming child after deceased sibling.” I had never heard it before. According to Wikipedia, it’s “a reference to, or name of, a person who has died.” In the article “What’s in a Necronym?” Jeannie Vanasco gets more specific: “It usually means a name shared with a dead sibling,” she writes. Vanasco’s middle name, which she goes by, is that of her father’s first child, who died in a car accident when she was sixteen, eight years before the next Jeannie was born. And the next Jeannie didn’t learn about her deceased half-sibling until she was eight years old, and then only sort-of-accidentally.

“Until the late nineteenth century,” Vanasco writes, “necronyms were not uncommon among Americans and Europeans. If a child died in infancy, his or her name was often given to the next child, a natural consequence of high birth rates and high infant mortality rates.” She cites Ludwig van Beethoven, Vincent Van Gogh, and Salvador Dalí as among those who bear the name of a deceased sibling. “In their 1989 Dictionary of Superstitions,” she continues, “folklorists Iona Opie and Moira Tatum offer one reason for the necronym’s decline: many parents feared it was a murderous curse.

“Another possible curse: the name haunts the child for life.”