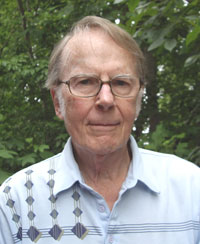 David Treadway Manning, a California native, received his Ph.D. in chemistry at Caltech, during which a required literature course introduced him to T.S. Eliot and W.B. Yeats. Following a 44-year career as an industrial organic chemist he began a second life as a poet. A member of the North Carolina Poetry Society, he won its Poet Laureate Award in 1996, 1998 and 2006. Dave is the current host of the Friday Noon Poets of Chapel Hill and serves on the board of the Poetry Council of North Carolina. A Pushcart nominee, his poems have appeared in Free Lunch, Main Street Rag, New Orleans Review, Pembroke Magazine, 32 Poems Magazine, Tar River Poetry, Rattle, Southern Poetry Review and other journals. He has five chapbooks: Negotiating Physics and Other Poems (1999) and Poets Anonymous (2001), both by Old Mountain Press, The Ice-Carver (2004), winner of the Longleaf Chapbook Competition, Out After Dark (2003) and Detained by the Authorities (2007), both by Pudding House. Dave, and his wife Doris live in Cary, North Carolina.

What a range of subject matter David Manning’s The Flower Sermon illuminates! And yet this collection is strongly bonded together by themes that join, combine and recombine in constellations of bright thought and profound emotion–and the whole is charged with a delighted wonderment. here is one of the most engaging volumes of poetry I have ever come across.

David Treadway Manning’s poems in The Flower Sermon show us a poet deeply rooted in this world, equally at home with its sorrows and its joys, its losses and the abundance of its promise. With him, we acknowledge the sweeping cross-hairs / of time and place. With him we recall a brief stillness when for a moment nothing died and the winds / lost their ways. With him too, we understand how every waking moment / is goodbye. These are poems to savor in quiet, in all their evocative moods.

“Carlita Corazon” we called her
in our high school Spanish Club. We were
honor students and so enlightened
we wouldn’t have jaywalked
without a committee decision.

But things happened fast one day
at Whittier and Atlantic Boulevards.
Too many piled into the old Ford
and Carla Hart jumped on my lap.
¡Ayee! ¡Caramba! I could only
hold her like Teresa of Avila
and in the hormone storm
all I could do was sing!

Later, Carla Ann broke the piñata
at the Spanish Club Christmas party.
It was the last time I ever saw her
and she left me with the taste
of bright red candy scattered everywhere.

On the promenade deck
of the M/S Tropica, the ice-carver
works against the clock. Intent
as Donatello, he chips into
the block, releases a falcon
flying from the soft blue stone.
He moves swiftly over the ice,
the gathered crowd already
losing focus, melting away
to the next entertainment.

His work complete, the carver
steps back, brushing ice-chips
from his beard. In the cloud-light
he could be a young Buonarotti,
chiseled fragments in his dark hair,
recalling David’s liberation
from his white stone.

Already the falcon’s wings are wet
but will carry it until the bell
for lunch calls the stragglers away.
A movement in the melting mirror
catches the carver’s eye-
a white sea-bird vanishing.
The carver’s message passes
like a poem never written down.

After the Flower Sermon,
Ananda Addresses the Forest

The green twig of Buddha
and the dead brown branch of Buddha-
surely, He is everywhere.
Blessed is the sunlight
and blessed the dark where the trail ends.

The lizard shimmering on the cedar log
is Buddha, and the dead squirrel by the path.
Even the fallen flower and the path’s stones.

The gray lark that preaches: Even in death
we are in life.

Blessed the slender bamboo
and the stout,
the long body of Buddha
and the short.
Blessed His abundance everywhere!

The swallows diving in the air
and the ants that climb in martial line
cannot escape enlightenment,
for one day’s sunlight is their prayer.

The stumbling beetle that pushes
the diamond-body of his dung
and the great owl that shouts in daylight
are the Enlightened One. And the firefly
and the owl’s downy-winged mate,
certain as the stream-brightened stones,
as the shaded moss where the path begins.