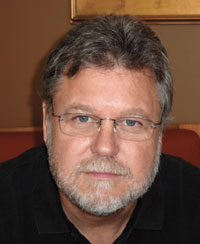 Born in Birmingham, Alabama, and raised in Illinois, V. P. Loggins is the author of one book on Shakespeare and co-author of another, and of Heaven Changes, a Pudding House chapbook. His poems and articles have appeared in numerous literary magazines, including The Baltimore Review, Cæsura, The Dalhousie Review, English Journal, The Formalist, Modern Age, Poet Lore, and The Southern Review. He was a finalist for the 2008 Washington Writer’s Publishing House Poetry Prize and a semi-finalist for the 2009 Word Works Washington Prize. He lives with his wife in Annapolis, Maryland, where he teaches at the United States Naval Academy. The Fourth Paradise is his first full-length collection of poems.

Loggins takes us on a journey through memories and myth, captivating us “in the landscape of this dream” called The Fourth Paradise; a beautiful book that will enchant you with its imagery and remain in your heart long after you’ve put it down.

The Fourth Paradise is an evocative and almost mystical collection of poems that pays tribute to family, to Ireland, and to myth. V.P. Loggins must have been the child at family gatherings who listened hard when the adults were speaking; now he repays their storytelling prowess in kind with poems that create the specificity of place (America’s coal mines “second cousin to turf . . . no bleaker than the bog,” Ireland’s Giants Causeway, Kilmalkedar, Dun Aengus) with imagery that also provides the universality of experience. The poems are rich and dense, chronicling people who live hard and love long; by the book’s end, the reader feels a kinship with the poet, understands and envies the strands which tie him to his ancestors and now snake around his children. He eats at his family’s “wake table,” reminding himself and us that “Poetry we say is prayer, this repast an obligation. Remember me.” It is a joy to join him there and agree; these poems will linger in your memory most happily.

V.P. Loggins’ The Fourth Paradise is filled with great care for the dead who have carried the long centuries to us. These are finely crafted poems which recognize the troubled beauty of this inheritance. Loggins melds the mythological within the ongoing history of the present. We are given songs of coal dust and whiskey, Black Diamonds, ponies on the rolling fields of Connemara, and love’s tangled arguments. The Fourth Paradise takes us to the edge of the landed world “to save what can’t be saved, to hold/ secure the magic of the world.”

The ’57 Chevy, black and white
and anchored in the morning sun,
stands waiting in the driveway
of my imagination for the four
of us to climb into the caul

of its cockpit, father behind
the wheel’s omega curve, mother
in the seat beside him fussing
with the beehive of her black hair
and telling us to roll the windows up,

don’t sit too close to the door,
and keep our hands off the handles.
For this is how each trip began,
holiday, my mother called it,
a sea of mystery ahead of us,

two rowdy boys, like all
who never saw the end before
it came, invading the backseat,
shipping like Castor and Pollux
on a fleecy quest. Now I sit

like a child again, peering through
the mind’s glass where the car
is pregnant with the four of us,
my father turning to back his way
down the drive and into the future,

as Paul set out to teach at Rome
in a ship named for the Gemini.
The car spins off in morning light.
The world is swaddled in its blue
like a bandage round my memory.

Mother did the fishing. She
brought the gifts to us like pearls
to sort by size and clean. Father
began by getting newspaper
and spreading it on the workbench
in the dim corner of the garage,

a butcher knife, a sack in which
to spill the shining guts and me.
He cut the heads off first,
then turned the fish and held
it by the tail and ran the blade
along the belly.
He fingered out
the mess that made me choke
in silence, then handed off
the knife. I turned the fish again
and scraped the blade along
one empty side and then the other.

The pearly scales popped in the air
like sequins through the dirty light.

When coal became a substitute for turf,
the name stuck like the coal itself,
Black Diamond: “And fine enough.”

Descending the timbered shaft was
a journey past the present hardship
of bringing up the company’s desire,

a trek into the lightless future, beyond
the bog-brown turf his father cut
to keep them warm, beyond the tongue

of hungry wind off the hungrier Atlantic.
When a black slab split away
from the timbered-propped roof

and broke his back, they laid him like
the coal, wagon-bedded in the coach
of death, and slapped the dumb horse,

his name pinned like a hallmark
to the pocket of his shirt. When he
survived some thought him blessed,

some cursed. His back forever bore
the coal’s cruel petroglyph
like a record of a deal with death.