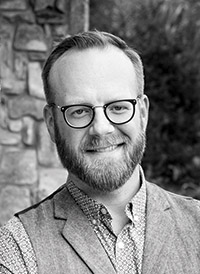 Benjamin Cutler is a teacher and poet. His poetry has been nominated for the Pushcart Prize and selected as a finalist and “Judge’s Choice” for Still: The Journal’s 2018 Poetry Contest. Benjamin is also a husband, a father of four, and an English and creative writing teacher at Swain County High School in the Southern Appalachian Mountains of Western North Carolina where he also serves as adviser to Swain High’s Gay-Straight Alliance Club, advocating for LGBTQ+ youth. When he’s not reading, writing, or playing with his children, Benjamin can be found on the creeks and trails of his mountain home.

At the heart of this collection are relationships in all their complexity – family, friends, students, and the natural world, especially our relationships with the nonhuman creatures. One poem concludes that a turkey vulture is “…not so different / from the rest of us / with your belly full of dead things / and your endless hungry search.” These poems may be an “endless hungry search,” but the reader will come away sated. –Pat Riviere-Seel, author of Nothing Below but Air and The Serial Killer’s Daughter

Ben Cutler’s work is rooted in southern Appalachia; its branches stretch to a post-apocalyptic tomato sandwich and back to Eden. In quirky, accessible poems, Cutler’s imagination quivers with empathy for everything—bats, children, god-like geese. These quirky, accessible poems, full of the music of common language, open a passage into a familiar world seen anew, as if on “the first day’s morning—// when everything first opened / and reached for the new light.” ~Catherine Carter

The bark of trees can be made into bread.

The Sami people of northern Scandinavia—
who have thrived in ice for thousands of years
by herding reindeer and pulling fish from
the frozen sea, but who were nearly wiped out
in the early 20th century through illegalization
of their language and forced sterilization
of their women—would carve away a birch’s
inner skin and dry the flesh next to the fire
before grinding into flour, mixed with wheat
or rye, for baking dark brown rounds.

I learned this when I was ten from some made-for-tv
documentary, the name of which I cannot now recall,
and was certain then that I could produce
the same result with my mother’s adolescent dogwood.
This was a Gulf Coast Pink—North Carolina
native, though not as common as white—
so I knew it would yield a superior taste.
I retrieved Dad’s flat-nose shovel from the shed,
pressed blade against bark at the level of my hips,
and flayed off a sheet to the level of my knees,

the fresh wound as pale and damp as oiled dough.
I would never know, though, would never
grind smoked bark or knead double-handfuls
into oven-ready mounds. Mom insisted, in grief
and rage, her dogwood would die—so young then,
so deeply cut and exposed as it was. But within a year,
splintered edges smoothed to lips—open and silent—
which, with each green season, have drawn inward
until all that now remains is the suggestion of a kiss
or something unsaid. And when bloom-time comes,

She started by dropping the i
and stretching the hiss
which she would halt with a punch
of tongue to teeth for a hard t.

I swear,
it sounded just
like the flight of arrows
in those old westerns
Dad would watch:
feather, shaft, and flint
finding
leather, bark, or bone.
But Mom would turn her head
to the side and down
to release it harmlessly
to the ground.
After so many battles won
or lost—really, who
can tell the difference
in the war of loving
and raising?—

she lost the t, too:
breath through teeth became
the wind through trees,
just the hush after shots fired—

Absolution at the Trash Compactor

Pull up in your pickup and he steps out
from his one-man shack, hat-rim haloing

cloudy locks, and comments on season and sun,
how the days are too warm for so little light—

laconic intonation as you heft
ritual refuse onto his alter.

If your offering is too large,
unorthodox in its bulk and form,

he sends you to another dumpster
or turns you away entirely.

But if what you’ve brought
is of the usual sort—

fatty bones of bull or bird, breads
in variety, fine flour and grains,

or synthetic fragments that last
longer than death,

all plastic-packed in incensed sacks—
he tells you to lay on, and with the press

sets the beast to a slow chew.
Your waste compacts

like forgotten memory
into a damp and unseen shape.

As you pull away, he lifts his hand,
as dusty and rough as a tablet of stone—

your truckload lighter,
though the spoil-scent lingers.

to be burned
with the beaver skull

she found as she walked
a wild trail—

a jawless grin
she has kept

for many years
without knowing why.

She wants
its seasoned pale polish

to blacken with her skin,
to heat-break

with her bones,
to mingle with her ash.

This is what she wants:
to keep something kept,

to make it last
past lasting.