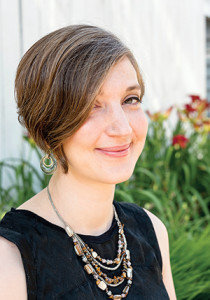 Kristen Renzi is an Assistant Professor of English at Xavier University, where she teaches literature and creative writing. Her scholarship focuses on gender, sexuality, and embodiment in British and American from the late nineteenth and early twentieth centuries. Her poems have appeared in Illya’s Honey, Monday Night, Existere, Exit 7, and Marsh Hawk Review, and her chapbook, “Saudade for a Breaking Heart,” was named a finalist in the 2015 Susan K. Collins/Mississippi Valley Chapbook Contest. She lives in Cincinnati with her philosopher partner and their three critters.

Imagine H.D.’s irreverent great-granddaughter rewriting Tribute to the Angels for the twenty-first century with a whole lot more attitude, and you will have some sense of what goes on in Kristen Renzi’s raucous, witty, and outrageously smart first book of poems. Come join God’s sister and the PAs (that’s Processing Angels) in the Dead Letter Processing department. They will teach you a lesson in the nature of faith that you will not soon forget. —Norman Finkelstein, The Ratio of Reason to Magic: New & Selected Poems

In her audacious debut, Kristen Renzi writes in voices both exalted (God, Archangels) and lowly (farmer, pregnant teen). Her heaven is as lively and chaotic as earth, where violence and suffering persist alongside “flash-pan triumphs torching/up through the rubble.”  These tightly written and rhythmically vibrant poems crackle with precision and wit, but also with tenderness and a hope that we will discover God has given us “wings/ with which to part the wind.” —Elizabeth Hoover, book critic and literary journalist

Jesus, too, was a backdoor smoker,
and I trust you see where that trend led.

Every day I’d catch him out back
with his buds, spitting critters in helixed rims

and the poor dweebs he ran with never
stood a chance. That’s where Joe

got the idea, you know, for that Smooth
campaign, and Jesus always being such

a looker with half the afterworld’s ladies
literally stooping at his feet (always clean,

those toes!), it was as though the posters
came readymade. Angel Stanley

brought Joe in—against, I might add, all
our rulings on beast-things….no, Stanley,

off work for a beer at 3, and just when
the cafeteria props up the Central Ear

for our prayer heeding, its great sail
of cartilage vibrating with faith.

A repetitive business, true, but the point is
it’s an angel’s job to hear those prayers

of the pious or lucky, and instead of working
like the rest of you, Stanley bumped off

to the pub to swill suds with my
layabout adolescence, comparing tats

on our biceps and trying to get our
hands on a Harley. Then Jesus goes

in a cloud of myrrh, but you can’t show that
to some uneducated camel and not

his passkey halo till he learns to hear
the lowly, but Joe’s on the loose now,

and it’s not just cigarettes—this coolness
quest is catching like kindling. A taco-

and-coke diet making up for a big-screen,
or flipped-out collars necking with ears

of half-clothed girls, sniveling drunk
in the cold outside a club—all looking

so damn hard for the smoke, and here I sit
with my son in the palm of my hand saying

“we’ve grown out of it, get some damage control
down there,” the charred resin

of status coats their walkways. Crunches
as they run, slips up all the small feet.

Some Kind of Birth

The chevy split in two
on a patch of bridge ice
the day my father the man
was born; the car broke
halves between front
and back like the seam
four bypasses of the heart
would wrench thirty-nine years
later in his chest, but my father
the new man pried up
his eyes in that half-car smoking
in a ditch, fought across
a snowdrift to catch the eye
of his brother, unharmed,
laughing, and the man in my
father woke up laughing, too,
saying “Go ahead and try me!”
as a door collapsed off blasted
hinges and the engine died
with a whine twenty feet
to his left. Of the five the man
my father joined in celebration
that day for the strange fate
of physics which chopped a car
to avoid killing some boys,
three at least still survive,
but one died in war and one
caved to disease and another’s
future curled away just two years
after the man my father and he
first met. One winter, my father
the man walked with me to revisit
that bridge, and he explained
exactly where the two halves
of the murdered car fell; the man
my father is and I stood
looking down at a lighter dusting
of snow, and I think we even
heard birds chirping, and I suppose
now he showed me memories
in the clean snow so keenly
so that when that man,
my father, held my hand
across a hospital bed I would know
he could say, “I am afraid.”

I got into a car accident yesterday.
I was beaten by my partner last week.

who would fault me, in case number one, if
I thought this would never happen again?

how sad that persons—you and me—
outshine the odds of pennies.