The God of Happiness 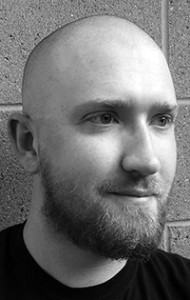 Samuel T. Franklin was born in Valencia, California, but grew up in a small, central Indiana town. He earned bachelor’s and master’s degrees from Indiana State University, where he also briefly taught English as a graduate student and as an adjunct lecturer. Currently a technical writer, he lives in Bloomington, Indiana, with his wife, Jenna. He fills his time with woodwork, books, and growing the perfect mustache. The God of Happiness is his first book.

Samuel T. Franklin’s poems glimmer like graffiti in streetlight, where the ragged and dispossessed rush and rule. Yet the author makes it easy to believe we are all ghosts “haunting light and shadow.” With guts like Leonard Cohen or Tom Waits, Franklin is filled with a charge to juke, jive, and spill poetry that is accessible, sure, but don’t be fooled; these poems are rendered by a trained ear and tongue.  —Dave Malone, author of View from the North Ten

Umbrella boy
laughs and jumps.
Puddles splash up like prayers.

I stand on my swampy porch,
whiskey-lipped,
scanning the heavens for the Hammer of God.

She slides closer,
rain on her lips, pupils packed
with darkling clouds and hungry wind.

Where electric skylines hurl light at night.
Where stumbledrunk steps
on Saturday morning where the moon teeters
in the sky. Where bodies are busy
and booze pours easy
and drag-puff smoke is acrid and breezy
and keeps the future and its recessions clouded
and indecipherable as the drunk in the booth next to you
slurring “On the banks of the Wabash, far, far away…”
Where the bars burn brightly
and textbooks line your forgotten walls
when midnight comes calling
with fists full of bourbon
and the music at three in the morning shatters
like someone breaking glass beneath your pillow,
and it inhabits your skin
and follows you home like a wild and meat-starved mutt
to piss on your couch
and dance with your toilet,
and when the sun comes howling
and your guts are done brewing,
you stumbledrunk on out
with a beer-stubble shout
of “jesusmyhead”
‘cause you sure as hell can’t jive
when you’re twenty-four and dead.

Pig bones in the basement wall.
A few vertebrae. A trotter.
I buried them out back in a Pop-Tart box.

Cockroaches everywhere. The fleas.
We lived there with some other people.
They shed dirty dishes like dead skin cells,

refused to scoop their cat’s shit.
Once they forgot to pay the electric.
We dwelled like primitives for three days,

powerless. I molded a baconfat candle.
It sputtered a greasy smoke that clung
to our skin like a healing scab.

When they moved out,
they left molding strawberries in the fridge,
and a litterbox full of stale turds.

I have never before been ashamed to live somewhere.
But it’s worth remembering,
because that’s where I met Jenna,

on the front porch in summer twilight,
my future wife, beautiful,
her hair red with dye and sunlight.

“Here it comes,” she said.
It came rushing up the highway,
howling vastness of lightning and wind,
thundering battering ram pounding for us,
an emissary of unfathomable apocalypse.
It swallowed the world.
Deaf to everything save its nightmare lungs,
blind to everything save brake lights
bleeding a red line beyond the windshield.

But we knew it was there.
Crimson warning on the radar,
a monster rumbling on the radio.
A storm like any other, we thought.
Thunderclap and wetness,
a few stabs of lightning.
A stray cloud of ink
cut loose in a field of sunlight,
doomed to dissipation.

“Here it comes.”
We could only stare
as it consumed us, engulfed us
in a maw darker than dark,
sank its teeth around us.
Dumbfounded,
lashed into roadside blindness,
forced into a straggling breadline
of faces pale behind steering wheels,
stuck because true believers are born
only in the belly of the beast.