For those who prefer to pay by check, the price is $17/book (which includes shipping and applicable sales tax) and should be sent to: 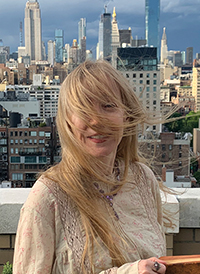 Helen Mitsios is a poet and writer. She pens the column “Out of Print Books We Love” for Wonderlust Magazine. She holds an MFA in Poetry from Columbia University and is recipient of the Glendon and Kathryn Swarthout Award in Poetry. A guest professor at the University of Iceland, she teaches a poetry masterclass in the graduate creative writing program. She is a professor in the department of Language and Literature at Touro College & University System in New York.

The Grand Tour by Helen Mitsios, is indeed a grand tour of legendary lovers, classical mythology, and philosophical meditation. Mitsios bridges the interstice of permanence and impermanence in this collection of lyrical and historical poems, delivered with wit and grace, such as portraits of famous pairs, from Orpheus and Eurydice to Serge and Jane. The Grand Tour is a collection of high art by one of the finest lyric poets writing today. ~Brenda Coultas

Helen Mitsios is an extraordinary poet, who makes language dance and–equally important–says something, which invariably takes our breath away. She’s an impressionist with words, and a glorious and powerful storyteller. I don’t think there’s a better poet in the world. ~Bob Guccione, Jr

The Grand Tour is like an illuminated manuscript–poems fill the page with magnificence and wonder. Helen Mitsios journeys from classical legends of yore all the way to the modern day and into the arms of a lover. We travel through cities as well as minds, transcending the limitations of our transitory existence in poems both ethereal and grounded. Mitsios is one of the most original poetic voices to emerge in our modern times.  ~Rúnar Helgi Vignisson

He walks in shadows on the terrazzo
under the Renaissance arcade.
He walks first in one direction, then the other
as if there were always just two choices.
In the park, the chestnut trees continue
their existential whispering but don’t ask
for his name. The trees touch hands
and bind their roots together.
The black waters of the Fontaine Médicis
hold glittery fragments that seem happy.
Once he tossed a coin in a famous Roman
fountain and a wish came true. Once
he tossed a coin that took his wish away
and sank like a tired fish.

Dried fishnets on the shore
and funeral ghats surrounded
by spectators and bursts of orange
marigolds. Who were these once-people
displayed now so openly on
funeral pyres for anyone to see
their last moments of earthly intimacy?
Flesh once like ours turned into black coal,
limbs once like ours turned into whispers of ash.
Dreams once like ours turned into eternal atoms
recycled back into the waiting arms
of mother universe who will toss us
back out again. Atoms once like ours
encased in flesh, invisible to the naked eye,
reborn somewhere. Someday.
The Harishandra and Manikarnika cremation
ghats flame day and night with bodies
wrapped in gold garlands. We peek
at the once-faces of the dead resting
on their smoke pillows and wonder at our own end
and who will see our death face. But we are
tourists and quick to move on. Quick to dip
into the Ganges for ablution that conveniently
offers a lifetime reprieve of regrets.
Tourists in our half-lives,
we sit on the Harischandra ghat
watching the river because we’re tired,
because Buddha sat near a river
and maybe we can learn an easy secret
or think a Buddha thought like he did.
We offer jasmine petals and sandalwood incense
to flatter an afterlife we don’t believe in,
listen hard to the sound of the Ganges
like it’s a language we never learned,
hoping for a word or two we can understand.
The Ganges River flows north towards
the North Star, but stars die.
I don’t like rivers. They’re never alone
and always move on. I trust the ocean
with its lonely waves reaching out for me.

Wittgenstein Takes a Walk Under the Stars

Wovon man nicht sprechen kann, darüber muss man schweigen.
What we can not speak about, we must pass over in silence.

with shlag and had one dark chocolate

that vanished out of the skies

are fuller in their blackness

than the sun with its boring alchemy,

all of its gold into the black mouths

of secrets and unsaid words.

Wittgenstein said he wanted to die, to become

a star in the sky instead of which he remained

stuck on earth, and not a suicide

And thoughts are words

that we say to ourselves and others

and they count even when whispered
or kept silent. To be silent,

not to say what can’t

be said—Wittgenstein knew that words

that even starlight dims

when a planet passes between us and the sky.