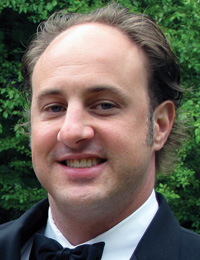 Born in Ann Arbor, MI; raised outside Baltimore, MD; Brad Johnson earned his MFA from the University of Miami and is currently an associate professor at Palm Beach State College in Boca Raton, FL, where he lives with his wife, daughter and dog. The Happiness Theory is his first full-length poetry collection. Work of his has appeared in Atlanta Review, Nimrod, Permafrost, Poet Lore, Salamander, The South Carolina Review, Southern Indiana Review and other publications.

Brad’s style always puts pleasure before plunder: the pleasure of communication before the plunder of literary artifacts that might help to make his case. In this sense he remains a poet of his time and at the right time for his poetry. And we, his readers, remain the lucky beneficiaries. –Fred D’Aguiar

Brad Johnson plumbs what he calls “the vague anxiety of American suburbia”–from Alzheimer’s in the family tree to alligators in the backyard. Here are poems of nervous young parenthood, and a speaker who slaughters, with humor, the sacred cows of political correctness. The Happiness Theory will engage and reward any reader open to the possibilities of contemporary poetry. –Peter Schmitt

Brad Johnson’s poems are visceral, memorable, and striking in the way they dwell in reality, yet take sudden surrealistic leaps. The poems in this collection grapple with various kinds of love and connections, and particularly issues of parenting with a touch of dark humor that has resonance on a number of levels. The Happiness Theory presents paradoxes of everyday life and offers a mirror to different relationships, albeit perhaps, a funhouse mirror. –Diane Thiel

Your bathroom rack is full of fingernail polish
and fingernail polish remover. Read and unread books
stack on the shelf and on the floor. Joyce hangs
over my head like vodka on a too early Friday morning.
Breasts in my face, hands, and on my tongue.
Freshly made love overwhelms the stink of cat
hair, yet you claim your cat doesn’t smell.
Freckles line your skin like highway lights leading
to Chicago, and I think of Fell’s Point and late
adolescent romance. My hands are far too callused
to appreciate the delicate balance of skin on my lap.
I swear if I have another evening like this I’ll run
into Spanish speaking Miami streets screaming prophecy
of the perfect vagina, the most succulent nipple
and how truth is found in the soft place behind the ear.
But I stay awake thinking how kidnappers inhabit Raleigh,
how Joyce didn’t die when he died,
and how I’ll sleep angelic, because of you, tonight.

I don’t want to let you out of bed this Saturday morning.
While a storm lifts the curtains of the open windows
and whiffs of rain sweep through the sliding glass door,
I don’t want to roll over, don’t want you to sit up,
don’t want the telephone to ring or you to dial
because then I will have lost you to your friend
in Happy Valley who’s getting married to a Methodist
archeologist from Missouri, or to your other friend
who’s getting married outside of New Haven one
week from yesterday and the dresses don’t
fit. The best man’s threatening to not show. The last
wedding we attended, in Michigan two weeks ago,
was my Irish-Scottish friend’s and I wore a kilt and long
wool stockings and no underwear and a little satchel
around my waist where I kept a flask filled
with whiskey. We’ve been married one month
and I don’t want to let you out of bed this Saturday
morning. I’ve heard if you put a marble in a jar
for every time you have sex during the first year
of marriage and remove one marble for each
time you have sex anytime after, you’ll never empty
the jar. I want to fill that jar and empty that jar, construct
new jars, shape marble sculptures, fashion monuments,
employ museum curators, assemble gardens.

Surely, even at eighty-eight, did the joints
of his loins loosen at the sight of her
dropping her robe on the chair, exposing
the great feast and assuming the position
of their repeated sessions. All artists don’t
labor in basements. His grandfather worked
in symbols, assailing the west by interpreting
all the talking horns, the tree of fruit and shadow
cut down, the iron man with clay feet smote
by rock carved without hands. Beasts became
men. Men became beasts. They wandered
the kingdom with dew-wet beards, grass stained
teeth. Was this symbol or disease? Porphyria?
Clinical lycanthropy? Something Oedipal?

What did Kate confess once they got talking?
Was she queen of the banquet hall or did
she pull from Lucian a confession of flesh
handling, the benefits supervisor’s tits
and belly spilling off the sofa?

They watch the coffee maker percolate,
empty bottles of wine, open books, talk
of navy days and tattooing. Then his hands
on Kate. The greater the artist, the lesser
the technician. And she more in demand
but less beautiful in the beauty market
she created. His hand wavers. Her skin
gives where it once resisted. Two swallows
take flight from the temple to the temple.