The History of our Vagrancies / Jason Irwin

The History of Our Vagrancies 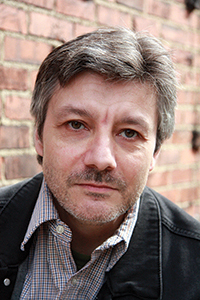 Jason Irwin is the author of A Blister of Stars (Low Ghost, 2016), Watering the Dead (Pavement Saw Press, 2008), winner of the Transcontinental Poetry Award, and the chapbooks Where You Are (Night Ballet, 2014), & Some Days It’s A Love Story (Slipstream Press, 2005). His work has appeared in various journals including Sycamore Review, Poetry Ireland Review, & Confrontation. He holds an MFA from Sarah Lawrence College. He grew up in Dunkirk, NY, and now lives in Pittsburgh with his wife, poet Jen Ashburn. www.jasonirwin.blogspot.com

We are shaped, each of us, by our own accidents, what Jason Irwin, in his gritty account, calls the vagaries, tracing his life in the rustbelt parentheses where “everything we’ve lost is gathered”: friends, family, the disjecta of abandoned rooms and factories, and most hauntingly, the clubfoot cynosure of the poet’s now severed limb, sympathetic to the surrounding music. “Like the song the dead sing,/or the cry of a newborn . . . the history of our comings and goings.” Poem after poem, Irwin stands his painful ground. His book shows us how the pivot foot gets planted and that circumference comes from that. ~Robert Gibb

With every line of Jason Irwin’s poems, our love for life is sharpened—even while those lines recount the losses, the heartaches, the hauntings, the treacheries of time. Here is “that dark, dreamy other world.” And here is comfort, companionship, longing, and then suddenly an acute sorrow that somehow makes us want more of the whole tragic beautiful thing, more of it, more… ~Jean LeBlanc, Ancient Songs of Us (Aqueduct Press, 2020)

POEM ABOUT MY FATHER DISGUISED AS THE END OF THE WORLD

Everyone knows this landscape is a façade:
propped up horizon of corkboard and tin.
Curve of flesh. Lick of salt.
It’s all we can do to endure
the next few hours: gridlock on the drive home,
the unavoidable reckoning
of empty rooms. Who can say for certain
we are not descended from the stars?
When I was a boy I lay in bed
while my veins burned. My father was an asteroid.
Some nights I caught sight of him crashing
through space. Other times he was the whiskey
in my glass, the voice crying “No.”
The almanac predicts a treacherous end.
There’ll be no more pleasantries, no more
high-speed streaming of your favorite natural disaster.
No V.I.P. value meals, or cream in your coffee.
So call down the gods if you want, the traffic police,
insurance men. They’re only smoke signals in the fog.
Hawkers on the midway. Nails bitten down.

At the SUNY Fredonia library I stuff a mangled copy
of Letters Volume One: 1940-1955 down the front of my jeans.
With slow, measured steps I pass students
who thumb through magazines, smile at the librarian,
who stands contorted behind her desk –
a phone sandwiched between ear and shoulder.
At the security doors I discover my left shoe is untied.
Quickly I shuffle through the detectors as fast as I can,
laces flailing. An alarm sounds. Red lights flash
as I cross that invisible line. I’m certain some underpaid
security guard with a hero complex will take me down.
Yet once in the hallway I find sanctuary in the Men’s Room.
My heart sputters as I lean against the damp, tiled wall –
justified in my thievery, knowing everything
belongs to me because I am poor.

THE MOVIE OF OUR LIVES (ALTERNATIVE ENDING)

In this version we ride our bikes by the lake, hypnotized
by the zinc-colored waves and clouds.
The city is a postcard of that place we always wanted to visit.
In this version no one has to wear a wig to senior prom
because of chemo. No one’s car is set on fire.
No one OD’s, drowns, blows their brains out with a shotgun,
or dies in a high-speed police chase. In this version
your mother is young and beautiful.
No one’s house is repossessed. No one goes off to war
or prison. In this version your grandfather is working in the garden,
whistling. The Buffalo Bills finally win the Super Bowl.
In this version we’re happy with the people we’ve become.
We’re immortal, at least for as long as the credits roll –
feeling a tingle in our balls as we stand next to the train tracks in our t-shirts
and watchmen caps, as a westbound locomotive rumbles past.

At countertops, crumb strewn and greasy,
on broken down swivel stools in roadside diners,
where the waitress is always named Pearl
or Doll, they loiter, coffee growing cold
in their almost clean mugs, runny eggs
and burnt sausages lying on their plates.
Pencils stand at attention in their breast
pockets, tape measures or knives cling
to their belts. Always together, always alone.
They sit and watch the day run its course,
grumbling, cursing, commiserating,
bellowing their eternal complaint
on the life that could’ve been, how time
is killing them. Do they know their faces
are still growing? That the crows in the tree
are mindful of their comings and goings,
the hats they wear? That only dirt endures?
The one at the far right has a boxer’s nose,
and hair like steel wire. The one
in the middle sits limp as a scarecrow,
while the old man on the left, sporting a cap
that reads Hawaii, has a dreamy left eye.
In moments of silence they gaze out
the window, at the ruins of this company town,
where the sunbaked blacktop goes on
forever, where buildings of brick and glass
stand like tombstones, while the river and hills
beyond, hint at a promise they’ve long ago
stopped believing in. Forgive us our anger
they say, that swells and rises like the sea,
it is only fear and weariness in disguise.