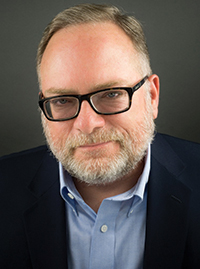 R.G. Evans’s books include Overtipping the Ferryman (Aldrich Press) and the novella The Noise of Wings  (Red Dashboard Press).  His poems, nonfiction, and fiction have appeared in Rattle, The Literary Review, Philadelphia Stories, and Weird Tales, among other places. His original music, including the song “The Crows of Paterson,” was featured in the documentary All That Lies Between Us. Evans teaches high school and college English and creative writing in southern New Jersey. Website: www.rgevanswriter.com

R.G. Evans’ HOLY BOTH is a powerhouse of a book—possibly the spookiest book of poems I know. The poems dig deep, and dig hard, but maintain their humor, music and perhaps above all else, their sense of surprise. HOLY BOTH is a work of philosophy and of love. Evans is a wonderful poet. ~Liz Rosenberg

Sure, there is holiness here, as well as myth and magic, but don’t let the titles, pinched from Cyril Connolly, fool you. Evans is messing with language and perception as he raises doubt to the level of the sacred. These poems are both hallowed and human. It’s as if they were written to be sung by a choir of angels, or chanted by a legion of centurions.  ~Peter E. Murphy, founder of Murphy Writing of Stockton University

When I opened up the book, I turned
magical, lighter than the ink upon its paper,
substantial as the grit and meat and bones
that rose from its pages. I wrote
another book inside the book, pale
marginalia beside the printed words.
When I studied the book’s magic, I turned
scientific, a physicist running a shell game.
Sometimes the pea. Sometimes
the empty shell. I cluttered my desk.
I rearranged the locks on all my doors.
I felt like a small, smooth stone
in a slingshot, pulled back then let fly.
Magic bore me up a while. Science
told me where to land. I started
talking to shadows: I knew how they felt,
stretched thin by blinding light.

The soul looks out the window,
decides the glass isn’t enough,
and begins to stretch,
its non-stop performance
of a lifetime. It moves with ease
if not grace, down avenues,
over bridges, and out into
the greening everywhere.
Intersecting with the bodies
of other souls as it goes,
it eddies and pools in
a thousand emptied gullies,
curling like fog through mornings
of humans who don’t know
they’ve been asleep.
It’s honeysuckle June and wood fire fall,
ice-clear winter and rain-soft spring.
Always moving away, never doubling back
to the window where it began,
where its body places one hand
against the pane, feels the cool glass
warm, but doesn’t know the cause
is never flesh alone, doesn’t know
how thin its traveler has grown,
the exquisite dissipation
of not coming back.

When you dig for truth with a two-headed spade,
you might unearth the holy both.
It could thunk under your blade like coffinwood
or glint like gold in the newfound light.
Be careful whom you bring along to dig:
not everyone loves what’s buried like
lovers of the grave and ditch.
Some with eyes like barcodes
sing checkout scanner hymns.
Some with pharmaceutical grins
know just one bite is all you’ll need.
Some with their own double shovels
toss the dirt back in as fast as you can dig.
Only your eyes mark the spot
like the cartoon comatose, Xs
blinking sweat from Xs all the while you work.
Don’t be surprised if what you find
looks like dirt at the bottom of the hole,
because here’s the truth:
there is no bottom to the holy both.
It might take a lifetime to find,
but that’s what it took me to hide it
a thousand holes ago,
when it buried itself and told me
go on digging.

An Apology to the Universal Audience

There is no universal audience,
as you must surely know
sitting there reading this alone.

Look! Look at what I’ve found!
If they look at all, they smile
wanly, or scratch their heads,

eyebrows raised as if finally
your chief symptom were manifest.
There’s only you, Elisabeth,

or Monique, or Vince. You understand
why the witches come first,
why the ghost opens the show,

why those in for a penny and those
in for a pound dreamed the plays
the same. But now two of you

are flagging, your tea grown cold,
your thoughts turned to marketing
reports yet to come. If you come

back, then they’ll come back,
and maybe you two or three or other
single digits will feel as universal

as that worm–which was, of course,
when it squirmed into the night.