The Hum in Human / William Aarnes

The Hum in Human

The Advance Sale Discount price of on this title has expired. Those who prefer to pay by check, the price is $18/book (which includes shipping) and should be sent to: Main Street Rag, PO BOX 690100, Charlotte, NC 28227-7001. 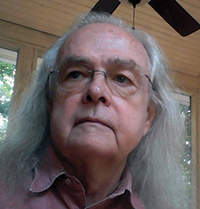 William Aarnes was born in Columbia, Missouri and raised in Fargo, North Dakota. He currently lives with his wife in Clemson, South Carolina, having retired from a career as a high school and college teacher. His poems have appeared in print and online journals such as FIELD, The Southern Review, Poetry, and New Verse News. He has published two collections with Ninety-Six Press—Learning to Dance and Predicaments—and a third collection, Do in Dour, with Aldrich Press.

Unlocking experience and memory through image in order to measure the world, explore it, and grasp its power and impotence is Aarnes’s great gift. The Hum in Human is full of sensory delights of the body, memory, and imagination. It pulses with what’s loved and distrusted, what’s lost and erased, what’s absorbed in “that snug dark” and with what’s never to return. In a modern world of lockdowns and isolation these poems reveal a life both real and transcendent. ~Rick Mulkey

Humane and passionate, Bill Aarnes observes our world where “normal life” is interleaved with what should be abnormal—war, weaponry, trauma. This is a book where “art” is surrounded by “heart.”  ~Alice Major, author of Welcome to the Anthropocene

The Hum in Human is rich with details—remembered things and forgotten things—sometimes dark, sometimes delightful, but always compelling. William Aarnes uses words within words as one entry point to illuminate all the complexities in our language, our syntax, our gestures, and interactions. The Hum in Human is multi-faceted, captivating and smart. The poems cut acutely, and Aarnes is a man who hits his marks like, well, a marksman. ~Michael Kleber-Diggs, author or Worldly Things

“It was so dark inside the wolf.”

the father can now twist the knob
on the bedside lamp
and kiss his daughter good night.

“The better to eat you with!”
She giggles, then snarls,
her hug cinching his neck.

on the forest floor.
And, he suspects,
the girl’s parents mourn

by cursing heaven
and blaming, loathing each other
while begetting another chance.

His daughter tightens her hold.
He weighs telling her
the truer story

but decides to whisper
“What strong arms you have”
so she’ll laugh and let him go.

The house had a baby grand
but there were no musicians

among us, no one even tempted
to finger the keys, maybe two or three

who could whistle a melody
or quote a showstopper, maybe

but no singer who could carry
a tune, no one who could read

the sheet music open on the rack.
Oh, some of us could cook

and, though all nine of us liked
to talk, none us minded silences,

those lulls when we were content
not to listen to someone perform.

The Poet No Longer a Poet

He did what he could
to remove any posted poems

from the internet. He gave
his shelves of thin volumes

and anthologies to a library
that would sell what they could.

Putting aside his scruples
about recycling, he stuffed

his own books and manuscripts
into seventeen garbage bags,

putting out one bag a week
till all his work was gone.

in thought, in words and grammar,
in nuance. A couple times, he gave in

and composed in his mind
some hyperbole. He’d decided, though,

never again to write anything down.
He was lucky; his day job

had provided a pension; he could get by
doing nothing. Now, if only thoughts

would stop occurring to him—
like today his dwelling on how

to describe the textured savor
of dried apricot or his worrying

about his failure to imagine
the after-hours evenings

of the anonymous women
who had stitched the seams

of his comfortable jeans.

After the burial
of our wizened cousin,

my sister, another girl
with a quick-to-wrinkle face,

took over the task
of tasting, of testing

after the snow melted,
slick black pebbles, ruddy ones,

scoops of grubby mud,
the foam clinging to reeds,

the moony berry
from under yellowing leaves.

busy with damselflies,
snails in their shells,

the guts of bludgeoned prey,
that bite of kidney

from a chased-down stranger.
She’d choose whether to chew

and swallow, spitting out
most things. Even so, she’d retch

more often than not.
Addled, scowling,

she wandered off.
So it is now my lot,

my mouth puckered
by buds that sting.