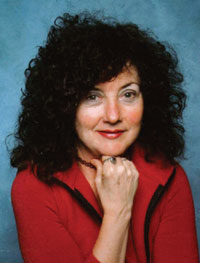 Lynn Shrum published her first poem in 1978 in the Spoon River Anthology at Bradley University. She later married a librarian, finished her Master’s Degree, and began teaching composition and literature at UNC-Charlotte. She currently teaches literature and writing at Rowan Cabarrus Community College and Carolinas College of Health Sciences in Charlotte.
In 1985 she taught English in Turkey for two years. Returning to America, she decided she wanted a child instead of a Ph.D. from the University of South Carolina and had her son, Dylan, who is now 15 years old.
Publications include South Carolina Review, Amherst Review, Long Island University Review, and Las Vegas University Magazine among others.

Everyone tasting the apples.
No plastic. Sawdust for a floor.
Open stalls full of oranges, pears, tomatoes.
We would go there religiously
those first tender years.
You chose melons slowly,
careful to get the very freshest.
If only we could have been that careful
with each other.

You bought freely,
ten-pound bags of onions,
braids of garlic
for the tantuni.
Peaches were favorites,
nourishing our son till he was 3.
You would hand him
the ripest to sample,
as he rode on your shoulders.

Then we moved to Carolina,
and winters were colder, but in spring
the ripeness of harvest would return.

I wanted to be the kind of woman
you wanted. One to cook and clean all day
and tend our babies.
I wanted to have dishpan hands
and absent eyes,
like your aunts in the village
who would spend hours

stuffing eggplant with beef and oregano,
grape leaves with whole grain barley,
bell peppers with rice.
I needed those women to show me

how to handle you, but they aren’t here.
And when I lived in your village,
I longed to be home
reading English.
Now in autumn
I visit this smattering of country farmers
selling strawberry peas and October beans,
peaches preserved in Bell jars.

Alone in early morning
I long for the huge apples,
the peppers, the eggplant
dark and pungent.
I want to see dark-haired boys
eat ripe peaches,
as they ride on the shoulders of men.

But I buy only this bunch of zinnias
picked at 5 a.m. by this farmer’s wife.
God help me, I will envy her forever.

The night we conceived him
I spoke of the black man in the next room,
trying to muffle your whiskey passion.
But it bloomed into bruises around my eye,
infesting the heart’s red quick like plague.

In the morning I discovered
my innocence the all night fear had chilled
beside the decanter, that golden wrong gift.
I arose with the fertilized egg
I had already begun to love.

In the battle of wits that followed
I thought you had won
until his head crowned, the black hair
shimmering with sacred blood,
sprouting that sacrifice, our son, into light.

Each month without you, without
skirmish, my menses flow freely,
like Rosemary’s just before conceiving;
in blue fuzzy slippers she watched the Pope on tv,
while hubby conferred with Lucifer.

Invisible, I lean on a lamppost
no one may ever see,
my cigarette smoke curling toward limitless sky.
Pieces of furniture hover around me like nurses.
Books are my sentinels.
My son sleeps beside faces of caped heroes torn from comics,
his small arms raised toward heaven,
not yet aware of confession, of giving in.

#1 Piney Flatts, and that photo you took
of Armstrong and Aldrin from the screen in ‘69;
jazz and benzedrine–about once every decade
I catch Chet Baker’s trumpet playing
and something wells up in my chest.
Unlike Jackie and Roy, Jobim and Gilberto,
we never harmonized.
You were Dylan in tight jeans.
I was Baez, broiling you T-bones on Saturday night.
Children ourselves, we were childless.

#2 We took turns driving your powder blue Nova
around the best neighborhoods
to choose our house, reading Wallace Stevens.
Your ivy league voice boomed belonging
to the blue guitar.
my first shower in your apartment, an epiphany.
Marriage was never important,
except to your mother,
so we followed her wish
and read Gertrude Stein on our honeymoon,
drank champagne on the Savannah
Hilton terrace, putting off sex until later.
But the friendship lasted.
You called when you lost your father last year,
this year your mother. Now you sing the praises of Esalen.

#3 The most amazing sex. When I turned 37
you were 19, taking me to a different garden
each night. Brainy and lean,
the kind who watched me sleep,
you said I was too good for mascara.
I knew better, also that you would leave,
but you gave me the desire for a son like you.

#4 Laurentian, at last, you gave me blood,
the black eye, and the brown-eyed son.