The Last Time You Were Here / Terry Sanville

The Last Time You Were Here

The Advance Sale Discount price for this title has expired. Those who prefer to pay by check, the price is price is $20/book (which includes shipping + tax) and should be sent to: Main Street Rag, PO BOX 690100, Charlotte, NC 28227-7001. 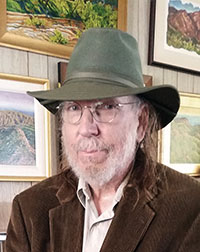 Terry Sanville lives in San Luis Obispo, California with his artist-poet wife (his in-house editor) and two plump cats (his in-house critics). He writes full time, producing short stories, essays, and novels. His short stories have been accepted more than 450 times by journals, magazines, and anthologies including The Potomac Review, The Bryant Literary Review, and Shenandoah. He was nominated twice for Pushcart Prizes and once for inclusion in Best of the Net anthology. Terry is a retired urban planner and an accomplished jazz and blues guitarist – who once played with a symphony orchestra backing up jazz legend George Shearing.

These stories are like finding a classics channel movie and a film you’re sure you’ve seen before: familiar, real. Vaguely, you’re sure of the ending. In black and white, you’re comfortable, confident, in control of this past remembrance… and you’re wrong; time and again, you’re wrong. You prepare to catch the trick, expose the magician… and you’re pleased when you fail, being taken in again. Then, you get to move to you’re next surprise. ~Gwyl Weatherford, Short story/screenplay writer (Killing Flies) and writer/director of the 2014 feature film, Underclassmen

In this new story collection, Terry Sanville, sage of California’s Central Coast, bard of the old working-class Calle Poniente neighborhood of Santa Barbara, chronicler of dystopian futures, stretches himself yet again to explore an eerie territory kids of his generation–and mine–knew as the Twilight Zone. ~Michael Harris, author of White Poison and The Chieu Hoi Saloon

1.
Brian pressed his cheek against the trunk’s rough bark. It smelled like butterscotch. He felt the pine tremble in the wind. The branch that he clutched with his legs thrashed about. He had no idea how he’d got there. One moment he’d been spinning his lovely wife across a Vegas dance floor and the next he was gripping the tree. The sleeves of his sports coat rode up to reveal the Rolex she’d given him for their silver anniversary. The watch had stopped.

He stared downward. A swirling greenish-gray mist hid everything. The tree trunk disappeared into the fog with no branches to climb down on. He fumbled in his pocket for something to drop, to determine if the ground might be close. Grabbing his hard-shell glasses case, he filled it with pocket change, shut it tight, and then released it. He held his breath and listened. Only the moaning wind made any sound. He turned on his smart phone, no bars. Brian stared upward at blue sky and sunlit limbs. Maybe my phone will work if I climb higher, he thought, and pushed himself up, his leather-soled shoes slipping on the branch’s rounded surface.

The tree limbs above him ascended like a giant spoked ladder. With unsteady legs he started climbing. The scented air burned his lungs.

2.
As Brian moved upward, shafts of sunlight showed his tree to be one of many in a forest of indeterminate size. Other sounds now echoed through the woods: the screech of hawks, the chatter of squirrels, the complaints of Steller’s jays. He moved slowly, carefully, remembering to keep a three-point contact with the tree. Black spots danced before his eyes and he sat on a limb to catch his breath. He stared outward along the branch. Maybe fifteen feet from the trunk, someone had built a platform that spanned the space between two limbs. A crude wooden hut clung to the planks. A boy sat in its open door, his head bowed, as if sleeping.

“Hey, are you okay?” Brian called.

The boy raised his head and grinned. “Better than you.”

“What are you doing here?”

“What does it look like? I’m building a tree house . . . like the one you and Steve built but wouldn’t let me help.”

“Don’t you recognize me? I’m Larry, lived down the block from you. We went to the same school.”

“Right, Larry . . . Larry Conklin. But that was almost forty years ago. How can you still be a child?”

“That’s for me to know and you to find out. You will, soon.”

“What’s that supposed to mean?”

“You never let me play with you even when I begged you to. Why were you so mean to me?”

“I . . . I didn’t mean to be mean. You were younger. You know how kids are; the older ones won’t play with the little ones.”

“But you really hurt me. I never forgot.”

“Yeah, well now you’re too old to do young things. How does it feel?

That’s how I felt back then. And for no reason.”

“Nothing. Just keep climbing. There’s more.” Larry stood and moved inside the hut and closed its door. The light dimmed, as if the sun went behind a cloud. Brian stared upward. A cold chill ran through him. He rose and climbed on.

3.
A sunlight shaft warmed Brian’s shoulders and he stopped to check his cell phone; still no service. He breathed in, out, in, out, as if that simple function had more importance now. Below, the mist had risen to meet him. He reached upward to grab the next branch and continue his ascent. But a voice called to him from out of the fog.

He slumped onto the branch, his whole body trembling. A young woman with milky-white skin and hair the color of outer space climbed toward him. She wore a revealing dress, her bare feet expertly moving from branch to branch. With strong arms she pulled herself up and sat on the limb next to him. He stared at her face with its high cheeks, dark eyes, and pouting lips. Sliding an arm around his waist, she clutched him tightly and kissed him. His heart pounded and so did hers.

“Where have you been?” she asked. “You never called. And that last night we had was so fantastic.”

She smiled. “Of course you do. I’m a friend from high school.”

“Yes, yes, now I remember. I had you in Spanish Class.”

She chuckled. “You had me in the back seat of your car, after the senior party.”

“Sandra, and you don’t need to be embarrassed. Actually, you should be.”
“You’re right, I should be. What happened to you?”

“What happened to me?” The girl frowned and stared downward into the mist. “You never called. I was afraid you’d be one of those ‘love ’em and leave ’em’ guys. I was right, wasn’t I?”

“I was a punk back then. We all did hurtful things.”

“He was the love of my life. But without a father he ran with the wrong crowd. Some gang bangers shot up our place. He didn’t make it. It destroyed me.”

“Just shut up. All you had to do was pick up the phone.”

Sandra pulled away and climbed out to the end of their limb until it bowed downward. She blew him a kiss and slipped from the branch, spinning slowly like a dandelion seed, and disappeared into the mist. Brian stared wide-eyed then touched his lips. He savored the lingering taste from her kiss. Memories of that forgotten night came flooding back, the torture of young love, the panic to undress, the press of bare flesh. They made his chest ache even worse.

Brian shook himself, pulled his jacket shut and climbed on.

To read the rest of this and other stories in The Last Time You Were Here, order your copy today and have it delivered to your house when it is released in March/April 2022