The Light on the Wall 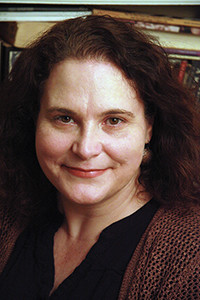 Jen Ashburn’s work has been published or is forthcoming in Chiron Review, Grey Sparrow, Lilliput Review, The MacGuffin, Nerve Cowboy, Pittsburgh Poetry Review, the Pittsburgh Post-Gazette, the anthology Words Without Walls, and other journals. She completed her MFA at Chatham University in poetry and creative nonfiction, where she taught creative writing to inmates in the Allegheny County Jail. Originally from Indiana, she spent four years in Japan and greater Asia, and now lives in Pittsburgh.

What a stunning group of poems, each one as sharp and clear as a diamond shard of glass. The last time I can remember experiencing poems that moved me as intensely as these, I was a young woman reading Sylvia Plath for the first time. From poems exploring a mother’s mental illness, through those informed by travels through Asia, Jen Ashburn traces psychic wounds of both humans and cultures with precision, nuance and emotional color.  This is the best collection of poems I’ve read all year. — Sheryl St. Germain

Jen Ashburn’s debut, The Light on the Wall, explores the question: “can I love this earth/not having born it?” The answer is a carefully observed, tender, complex, compelling, Yes. These poems of displacement, of a woman navigating the strange territories of a dismantled family and travels in foreign lands, will wake up your eyes, and Ashburn’s voice—sure, steady, and surprising—will leave you praising and echoing her words: “Let me remember even when I’m hunched with work, when I’m old and crumpled with life: This life. Thank you. Please.”  –Nancy Krygowski

In The Light on the Wall, Jen Ashburn powerfully depicts the fragility and complexities of childhood alongside the wonder of exploring and observing the world around us. This is a poetry of memory but also of awakening—written with great musicality, a precise eye for image, and a spirited tenderness. “I need the dark to see the starlight,” Ashburn says. She captures both darkness and light elegantly in this stunning debut collection of poems.  –Scott Silsbe

When I remember that night, I can’t recall
if we had pork chops and broccoli for dinner,
or ham and beans, or fried blue gill
with stewed tomatoes. I don’t know
if we watched TV or sat on the back patio
listening to crickets. I can say it was summer;
the evening light soaked everything
in the color of plums—not the skin of plums, or the flesh,
but that deep orange-red that bleeds in between.

She was gentle at first, my mother. Then she said,
“This is how they restrain you in hospitals.”
She tucked the sheets hard under the mattress,
trapping my arms, legs, shoulders, my surprised ribs.

How old was I? Strong enough to untuck the sheets
and crawl out of bed, but I didn’t. Into the night
I listened for her return footsteps and startled
at every old-house creak. What I remember
from that night is this: my mother’s unsteady eyes
behind her thick-rimmed glasses, and squares of light
gliding across the bedroom wall. Light through the window.
Light from the station wagons and pickup trucks
that said, so patiently, there is a road. My mother
was breaking. Even the light on the wall knew.

The sun dries the morning dew,
the hogs root in the dirt,
and you disassemble your moped
and say something about a carburetor.
A Monte Carlo with its tank-like girth
rolls over the gravel that used to be Henry’s Road.
It’s 100 North now. There’s a sign that says so.
We are on the grid, the 911 circuit board.
So if we need an ambulance, a fire truck
or police officer, they’ll know where to find us.

This carburetor—I know you’ll never
get it put back together, and I know
that a carburetor that spits and coughs
is better than no carburetor at all.
But there’s no telling you this,
you who feign confidence
in a breaking teenage voice.
Stupid, unreasonable confidence.

“It’s going to be okay,” you’d said, that night,
when we lived on Highway 62—a rural route,
a box number on a long line of box numbers.
It was September, cold enough to need
our coats. We crouched in the barn
and watched the shadows of our parents
fight in light-soaked windows.
Watched them roll all arms and legs
into the back yard, under the sycamore tree.
Watched as our neighbors watched, silent
and waiting. “It’s going to be okay,” you’d said,
and I hated you for your certainty.

Now we are safe, in a way. But you are too quiet.
I wish I could call an ambulance, a fire truck,
a police officer. You thread your forefinger
through the intake manifold, talk about needing
parts from town, the richness of the air-fuel mixture.

“Heart of the whole and essence of the scene is the river, the flowing river
with its thin fringe of green…”  — Edward Abbey

And this is the Mekong, the tour guide explains.
These are the shallows where naked babies swim
and women wash clothes. Here are anvils
of sedimentary rock thrown into the mud
like lightning bolts from God or Indra.
And here’s the dark, still stream where an angry naga
lurks in the water.

The water here is thick with color—brown, ocher, red—
like decaying wood. It flows from the Tibetan Plateau,
suckled from a glacier, tumbled down mountains.
See how it cuts the bank, how it breathes
sand and foam and bits of fish.
Listen—a river lapwing chirps.

But listen, says the tour guide. Watch.
A speedboat skirts an eddy while six Laotians
in helmets and ponchos duck in the spray.
We are on the slow boat—wood creak,
heavy oil smell—and we glide down the river, tourists.
We visit the cave with a thousand Buddha statues.
We kayak the rapids. We drink Beerlao
and ask for Coca-cola without ice
because we’re afraid of germs in the water.
While here, Vientiane teens play badminton
on a sandbar. They are flirting.
They take photos with their iPads.
Here is an Irrawaddy dolphin,
a woman digging for clams,
a fishing village. Two shirtless boys
under a house untangle nets,
wishing they were teenagers with iPads.

This is a Vietnamese elephant fish.
Here is industrial muck that laps
the banks near Ho Chi Minh City, that blackens
the stilts of a reed-woven hut where a toddler
sits on a plank, smiles, and waves.
Here are more tourists, saying, How quaint,
or, How awful. Here is a family selling potatoes
from their boat. Another selling mangosteens.

A woman in a motorized sampan
stuffed with bananas cuts
through the palm and camphor branches
that float on the water. Listen to the cough
of the two-stroke engine trailing blue smoke.

Child cry, bird song, the splash
of the fishing net. This is the Mekong.
Mother Water. Drink, she says.
Wash, choke. Sink into the mud,
the sledge, the life of me.

when I signed the dotted line
and joined the Guard, for money,
for college, for I-don’t-know-what,

for my father—a Vietnam vet. The war hung
in the clouds over the mountains
while we buffed floors and marched

in the predawn just for the sake
of marching. We learned

to shoot, to dig, to count, to run,
to jam atropine shots in our thighs
in case of chemical weapons.

And then we went home
and sat in dandelion lawns, ate barbecue,
worked lousy jobs and some of us

took classes at whatever college.
All the while we watched the clouds,
knowing if the wind pushed, the mountains

would score wide chasms
from which would fall
(we imagined) hot peas of sulfur.

to mop floors and pick up cigarette butts,
to practice donning NBC masks, to clean M-16s,
to fill out DD forms in black ink

and in the tedium, in the waiting and wondering
and watching, I thought, almost
better to go.

But I didn’t go. I stayed safe
at home. This war did not require me.

This was not my father’s war.