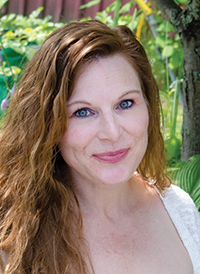 Lynn Marie Houston holds a Ph.D. from Arizona State and an MFA from Southern Connecticut State University. She is the editor-in-chief of Five Oaks Press and also the author of The Clever Dream of Man (Aldrich Press), which won 1st place in the 2016 Connecticut Press Club book awards and 2nd place in the 2016 National Federation of Press Women’s literary competition. Her forthcoming chapbook, Unguarded, won The Heartland Review Press inaugural book contest. This collection, The Mauled Keeper, was a runner-up for the 2016 Cathy Smith Bowers competition.

In this “tattered map of grief,” Houston serves readers equal portions of regret, loss, and loneliness. Yet there is power here, too. Readers will find that “it is possible to hurt from joy.” In poems that are musical and well crafted, she brings the natural and urban worlds together as the narrator tackles the obstacles to love and living in both. Ultimately, Houston shows readers that perhaps there is a way “to live with gratitude.” —Karla Huston, Wisconsin Poet Laureate 2017-2018, author of A Theory of Lipstick (Main Street Rag Publications, 2013) and Grief Bone (Five Oaks Press, 2017)

The Mauled Keeper explores the physicality of human/animal relationships —“the imperfect beauty of this savage world”—in order to create a metaphor for the emotional complexity of human romantic relationships, where one partner, like a lion who can tear apart its keeper, turns against the other with unexpected emotional violence. This intrepid collection of poems is about caretakers who suffer pain as a result of being either physically or spiritually ripped apart. Houston’s poems are so compelling, so powerful, because they are a physical, sensual exploration of spaces that are both intimate and wild. Unified by the solitude of her speakers, who yearn desperately for intimacy, and by the central problem she explores—how those who give often suffer quite unexpectedly from those who take, the poems in The Mauled Keeper are necessary because they teach us to listen to the cry of the heart, be it animal or human. —Vivian Shipley, Connecticut State University Distinguished Professor, author of Perennial (Negative Capability Press, 2015) and All of Your Messages Have Been Erased (Louisiana Literature Press, 2010)

Tim stores a shotgun under his desk, next to the fancy stationary.
He works in donor relations at the zoo, dons a suit to throw parties
for the wealthy patrons. But if an animal escapes, he’s trained to kill.

It’s Saturday afternoon, and we’re deep into a beer buzz on his back patio,
trying to decide if we can love each other. Recently divorced,
Tim pumps the barrel of the BB gun twice, looks to make sure
I am watching, and then aims for a squirrel. A tuft of fur goes flying.
The animal, still alive, scatters off with a bald spot on its tail.

Tim sits, swigs his beer with a smile, and gives me a quiz.
Imagine the following scene: a tiger is mauling its keeper, a second
animal is about to escape the zoo, which one should he shoot first?

The tiger mauling the keeper, I guess.
He shakes his head. You have to think of loss in terms of numbers.

I pick the only other answer:
The animal about to escape, because it could kill more people?

I imagine the final moments of the keeper as she bleeds out, betrayed
by the only person who could have helped her. Then I think about
the sacrifice romantic love entails: to reject all others and cling to only one.
In the echo of his gunshot, I hear the latch of a cage door open.
Something wild from my chest runs free across the yard.

The desert is no place for the faithless
or the drunk. Limning the canyon’s contour
the jack rabbit seems to drop dead
in the heat. Overhead, predators’ winged bodies
betray them with nowhere to hide
in the stark sky between sun and baked earth.

But danger passes on to better, juicier
lives, and the rabbit comes to,
makes his cagey way homeward,
smarter than I’ve ever been—
I, who have lost jobs and lovers
because I’ve stood up for principles
when I should have played dead.

Even jack rabbits in the desert know
more about self-preservation than I do,
that there is something to duplicity
that can save you when it counts.

They Say the Firestarter Shrugged and Blamed the Drought

I search for signs of life
as I hike the charred forest,
trees and earth blackened
by a camper’s careless fire.

I’m quiet as I walk, having
learned from chasing heron
with the click and whir of lens
that they will only come to shore
after I have put away my camera.

On the last black mile of the trail,
I find what I was afraid to desire:
the green among the ash. A fiddlehead
pokes through the rough terrain,
the curled fingers of a miner
thought lost, surfacing alive, braver
than I would be to try again.