The Narrative Possibilities of Coral 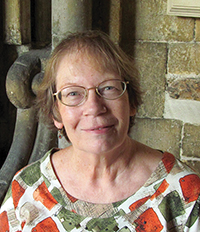 Priscilla Webster-Williams grew up in Chicago, then moved to Boston, where she studied poetry, joined the Every Other Thursday Poetry Collective, earned an M.Ed. from Cambridge College, and worked in public health education. After moving to North Carolina, she worked at the Durham VA, enrolling patients in The National Registry of Veterans with ALS. A former president of the North Carolina Poetry Society, she enjoys being a part of the state’s vibrant poetry community. Her poetry has appeared in publications such as Ad Hoc Monadnock, Soundings East, Yankee, Unlocking the Poem, Pinesong, Iodine Poetry Journal, and Main Street Rag.

A story as sturdy and intriguing as a novel, full of mystery and sorrow that yet wears the colors of celebration. The gone father who disappeared behind his gold trombone, forgiven perhaps, who may have lived in a salt regret. The mother, strong but caught in the plague of the middle twentieth century and disappearing for years into a sanitarium for tuberculosis patients, the child who speaks of life with a moving string of relatives. It is difficult for poetry to tell such a story with clarity and keep it poetry. Webster-Williams has done that, turning and turning a life into words, darkness into color, loss into lantern, into dance, into joy. ~Betty Adcock

The Narrative Possibilities of Coral, by Priscilla Webster-Williams, is a wonderful meditation on the past informed by the present, the kind of retrospective epiphany a poetry refracted through memory affords. These poems, as we turn them over and over, are prismatic, faceted. By their glow, we are led inevitably back through the labyrinth of time to moments resurrected and reimagined through a language at once arresting and plaintive. “Will this scene ever strike me as ordinary,” the poet asks. The answer – for a poet like Webster-Williams, for all of us – is, of course, No. Read this book. There’s nothing at all ordinary about it.  ~Joseph Bathanti, North Carolina Poet Laureate (2012-2014)

The Narrative Possibilities of Coral, the title poem of this collection invites the reader to explore this imagistic narrative of the senses, beginning with the mythic birth of coral and all the hues of red it seems to have begotten, while salt lingers through these poems from the ocean, to the table, an “antique Iowa salt cellar” and a metaphorical pillar. Webster-Williams’ well-crafted work is filled with music. Yet, there are quiet poems as well that touch on loss, fear, hope and joy. She writes with insight, empathy and clarity, making this a collection of beautiful poetry. ~Jonathan K. Rice

The Narrative Possibilities of Coral

I could tell you that coral was born
when Medusa’s head was severed
and her blood mixed with sand.
I could say red coral drives away
the evil eye, or that coral is the color
of berries, shrubs, fungus, and lobster eggs.
I could say Renaissance scholars
thought polished coral came from Mars,
or that coral-colored roses covered
my mother in her casket. I could say
a local man painted my house a Sunset
Coral Brick, that I planted coralberry
to get clusters of coral-red fruit, or that I lie
in a hammock under coral honeysuckle
near woody vines and heart-shaped leaves.
I could. I could tell you.

Betty “The Legs” Grable shocked the GI’s
when she married bandleader Harry James.
World War II was on, all the women swooning
over Sinatra, while my mother worked
at Kaiser Aluminum and coped with rations
of cigarettes, coffee, cheese.

Back then, Mom must have been coo-coo
in love with my daddy because she resigned
her riveting job and took the train from LA to DC,
where his Army buddies helped him do a Houdini,
flat out vanish—except for a trace, which was me.

By the time I was born, Germany was reeling,
Japan was in retreat, and my father
was on to someone else, while Mom scratched
out a life for the two of us, balancing
me on her hip each morning, carting me
to daycare on the growling bus, then catching
another to The Silver Spoon where she served
bacon, eggs, and grilled cheese to men
with cardboard briefcases and buttered fingers.

She was thin—beautiful as only tuberculosis
can fashion you—slinging hash for 1940’s
women’s wages, bringing home our daily
hardtack, tossing it on our wobbly table
next to her mother’s antique Iowa salt cellar
and headlines announcing the GI Bill of Rights.

Never, never Queen for a Day,
a show I saw on my cousin’s TV,
Mom was The Countess of Scrimp & Save,
her after-work evenings spent reworking
our daily numbers at the kitchen table
while I shuffled Monopoly money
to magically manufacture more.

When the cupboards yawned empty, we hoofed it
to Red the Grocer, who sold Wonder Bread on credit.
Red knew Mom was exhausted, he flat-out said
Don’t borrow from Down-and-Out-Loan,
that only adds trouble. Red’s acts of mercy
delivered us to another night of reckoning.

After our evening round of accounting,
Mom and I pulled down the flapper,
a lumpy bed that sprang from the wall,
falling from its doors with a lunge and a groan
to transform our palace of high finance
into a paradise for counting sheep.