The Nature of Attraction 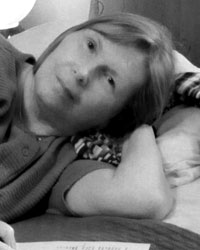 Pris Campbell’s poetry has appeared in Chiron Review, The Main Street Rag, Boxcar Poetry Review, Wild Goose Review and The Dead Mule among others. She has two chapbooks and two poetry books to her credit, the most recent being Sea Trails, published by Lummox Press. She has received three Pushcart Prize nominations. After living in places such as St. Louis, Honolulu, Providence, and Boston, she makes her home in the Greater West Palm Beach, FL. Formerly a Clinical Psychologist, she was sidelined by ME/CFS in 1990.

Scott Owens is the author of 5 collections of poetry and been published in numerous journals and anthologies. He is editor of Wild Goose Poetry Review, Vice President of the Poetry Council of North Carolina, and recipient of awards from the Pushcart Prize Anthology, the Academy of American Poets, the NC Writers’ Network, the NC Poetry Society, and the Poetry Society of SC. He holds an MFA from UNC Greensboro and currently teaches at Catawba Valley Community College.

When Scott Owens pitched The Nature of Attraction to me, he presented me with a dilemma. The Author’s Select Chapbook Series was designed to have authors for whom Main Street Rag had already published books recommend other authors who would be new to Main Street Rag. The dilemma was that Scott is also a contributor to this collection. On the other hand, there might not be a collection had Pris Campbell not read Scott’s poem “Norman’s Enormous Thing” and been inspired by it enough that she started her own series “Norman” poems. Thus began a collaborative where Pris and Scott would exchange poems and recommendations for poems and from that process, The Nature of Attraction was born. Since I could not let Scott recommend himself…

You hear multiple voices in The Nature of Attraction, but not by contrast, more by the harmonic way these voices mesh together, the way words and ideas fold together to form an image, a phrase, a meaning that transcends an individual thought and becomes something shared. That’s how it is with this collaboration between Pris Campbell and Scott Owens. In these poems, a lifetime passes for Sara and Norman, a lifetime of great joy and great sadness, of longing and resignation that wanting isn’t always enough. Throughout this rollercoaster ride, it’s hard to tell where Scott ends and Pris begins and vice versa because the narrators’ voice remains steady. A challenging feat handled adeptly by two very fine poets; an extremely worthwhile read.

Sara’s afraid Norman’s too big,
afraid he’ll split her in two
if he comes inside.
He presses against her hard
when they kiss, asks her
to hold it–she says no.
She knows what that leads to.

She once went with a man
almost as big as Norman, was cleft
into two Saras when he entered.
Reckless Sara, the one on the left,
one-footed it off to a biker’s bar,
did a one-breasted striptease,
made out with wild bearded Bill Sloan,
before prim Sara tracked her down
and jigsawed them together again.

Sara wonders if Norman
could be resized, an odd sort
of cosmetic surgery, granted,
like paring an apple all the way ’round,
and shrinking that fearsome head.
She knows some women like men big,
but Sara feels root canal size
already. She’s desperate.

She adores Norman, loves his blue eyes,
the way his hands, his mouth
make her giddy. She’s tempted
to be two Saras again, buys
strong rope, handcuffs, duct tape,
just in case, then burrows,
mouselike, into her far larger hole
of wanton indecision.

The Day He Left

Norman tried.
No one could fault him with not trying.
He never hit her,
not once in three years,
not even after the boy came
at first, though he felt the father within him
rising every day, trying to disgorge itself
across the bed, the table,
the faces of those he loved.
And then the day came
when his head hurt,
and it was too hot outside,
and things had gone wrong all day,
and the boy was suddenly louder
than he wanted him to be,
and his hand shot out
just ahead of memory screaming, “No,”
and then shot out again
in a trail of resignation
when she came to his side.

Sara stayed.
He knew she would,
at least for now,
soul that fought hard against giving up.
But he knew it wouldn’t last
having tasted once the thrill
of the familiar, like any addict
he knew he’d do it again.

Years later, old and alone,
he’d see it as his one success,
the woman he almost loved,
the day he left.

The words streak through Sara’s head.
She presses her lips tight until the nausea passes.
Trying to overcome this inexplicable fear,
she bends, a broken tree, over porcelain,
legs quaking, hands forming a plea.

When she finally remembers him clearly,
she weeps: his old man’s flesh
forced into her 8 year old mouth,
back pressed hard
against the narrow bed, springs creaking,
as he jerked his stench into her.

She grieves for the child she forgot,
had to forget, but now
can no longer forget, nights
when her stomach churns
and the moon buries itself deep
into the innocent sky.