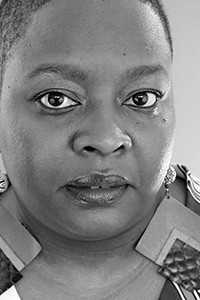 Natasha Ria El-Scari is a Cave Canem fellow, 2016 Ragdale Residency recipient and educator for over a decade. Born and raised in Kansas City, Missouri, she has a BA from Jackson State University and a MA from the University of Missouri-Kansas City. In 2015 Natasha released her first book, Screaming Times (Spartan Press, 2015) to local acclaim as well as CDs, DragonButterFirefly (2006), This is Love… (2010) and DVD Live at the Blue Room (2015) www.natasharia.com.

What does it mean to be “the other woman”? To want and be wanted only in shadows? The Only Other explores the complexities of loving someone committed to another. Through its expansive eye, intimate voice, and visceral imagery, this collection of poems explores right and wrong, commitment and independence, allowing us to view love from a range of perspectives. Natasha Ria El-Scari’s honesty asks readers to be daring yet vulnerable, the very nature of love.

In The Only Other, Natasha Ria El-Scari sets before us a feast of verse, and leads us through a complex tasting ritual. On the menu: the complicity of betrayal, the crystal ball of dreams, and reflections on rage and the anxiety of secrets. There are places where we can taste our own blood, but El-Scari’s transformational voice assures us that even as we query the tension between feminism and romance, or romance and intellect, or intellect and biology, we will leave the table nourished.

With both vulnerability and brutal honesty, Natasha Ria El-Scari challenges us to take a look at the other side of love. Writing from a new perspective, with her characteristic courage and wit, Natasha gives a voice to the often villainized “side chick”. Expertly crafted and startling in their revelations, these ain’t no ordinary love poems. The Only Other may make you flinch but this collection secures Natasha a place on the top shelf of contemporary African American poetry.

The Only Other is lovesick, weighty in its interior, and boldly beautiful in its back and front story. Whether readers devour Grapefruit to You Would Too in one sitting, or methodically graze upon it in alphabet chunks, its word choice, tactile imagery, storytelling and truthiness leave no room for page skipping—all the poems unapologetically come (un)done on each page screaming me too, me too.

I savor fruit like I want to be.
I split open its flesh, ignore
sticky streams down my fingers.
There has been sweeter,
a milkshake can do it better
but with fruit
you get something in return.
It’s complexity of acids.
It takes two names to classify me.
Often looked over
a little too big for a quick snack,
run the risk of being bitter
so perspectives step back.
But if you sit in the sun with me,
peel me apart quietly,
you’ll see devourable flesh,
get your face sticky.
I will give it back to you
on the inside only if you are brave
enough to navigate through intentions,
desires, commitments
and go straight to the juice.
I am a grapefruit,
bittersweet in my truth.

Wizard? Wizard! Cape on the floor,
those stars in his eyes
and off and off we go again!
Bile is fuel, press my gizzard
look at that lizard, turn to wizard!

Hide under the sheets!

Here he comes, wand attached
as if the magic is him.
He walks with heavy hips
towards me and breathes

let me see, let me see
show me how you ride that broom…

We wrestle over his wand.
Why would a witch insist
to challenge a wizard?

…and off to space and off to space
cosmic dust and friction
looks just like snow on Earth.
He waves his wand, his magic wand
even in the tiniest of places.
Creates a glue that seals like childhood
secrets to my broom.

I ride, I ride, I ride. I am always a witch
using my power for nothing but power.
The wizard, the wand isn’t really magic at all
he disappears…it’s just a little trick.

Nobody wins?
Spell to spell, sphere to sphere,
room to room, wizard and witch…

…and off we go again;
come on let’s go! Circle it, circle it!
broom me fast! broom me slow.

bring me more before you go….

You would do it too. Return.
If he used your year-old compost
to thrive you, rake life back into you
with the turn of his hand
nutrient rich in our time away.

A decade. A decade deep
and we are still rooting.
This dark stink that regenerates
her living. It’s stench to those
not benefitting except in gossip’s
unyielding tongues as we
thrive in our private sonic.
You say you wouldn’t?
Me too, me too. Return.

You would too.
Yes you would!
You say you wouldn’t?
You would. Return.

You’re just flesh,
the myth of martyr
constrains you.
The myth of love
evades you.
You say you wouldn’t?
Me too. Me too.

Oh morals,
your flimsy threats do not move
my stance. We are science
and prayer. You say you wouldn’t?
It will never last
being built on lust and deceit,
but isn’t all love?

I said I wouldn’t too.
Pinkie promised
my sister’s final advice,
laughed at her warnings.
You would too.
Yes you would!
You say you wouldn’t?
You would. Return.

Yes, conflict is the closest kin.
Distance is the best friend.
I know this love and still love it.
I hate this and still live it.

Why wouldn’t you?
You wouldn’t?
Yes, you would?
Would you? Yes!
No, no you say?
I say you would
if you could. Return.