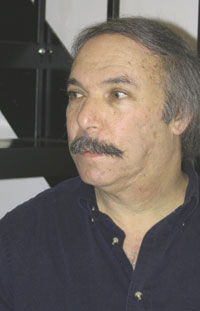 Leonard Kress has published The Centralia Mine Fire, Sappho’s Apples, and a verse translation of the 19th century Polish Romantic epic, Pan Tadeusz, by Adam Mickiewicz. He studied religion at Temple University, Polish literature and folklore at Jagiellonian University in Krakow, and Writing at Columbia. He teaches religion, philosophy, and creative writing at Owens College in northwest Ohio where he lives with his wife and three children.

The Orpheus Complex…an ambitious sonnet sequence that combines the myth of Orpheus with the poet’s reflections on various other issues including the state of spirituality in America today, the problem of “translating” an ancient myth into a contemporary context, and the nature of poetry and its relationship to what poets are writing. Poetry at the start of the twenty-first century has become familiar, comfortable, safe….The author of The Orpheus Complex seems to declare, “I’ve enough of that.” He asks us instead to imagine Orpheus, the ancient poet, sprung loose in America and writing intricate, rhymed sonnets that look at the world as it is and as it has been imagined by the poets who have come after him. The wonder of this book is that these poems don’t seem academic, simply a Modernist or Postmodernist exercise in literary self-consciousness. Rather, what stands out in The Orpheus Complex are the author’s erudition and considerable craft combined with his own life concerns. The mix results in poems that are always surprising, knowing, and effecting.

ORPHEUS ON AND OFF THE ROAD

A blinding locust storm in southern Illinois.
the kids who pick me up stole this Ford,
drinking and joyriding, reveling toward
the coast. And when they stop to let me pry
the black gook off the wipers, they screech away,
hysterical, my rucksack in their trunk.
I have surrendered to the road and pray
as I hitch, buffeted by each passing truck,

it will provide. And so it does. Two more rides,
Iowa cornfield to sleep, dancing stalks
and whispers–to be found you must be lost.
Falling stars throughout the night, roads
almost abandoned–a Mustang of six-packs
and four small-town girls, heading nowhere fast.

–D.H. Lawrence, The Man Who Died

The mountains burned each night as if the blood
of Christ was burning off, and then transfused
by day. A couple took me in, Mary with her brood
of freckled kids, Joseph, ex-biker, half-tamed beast
who went about collecting honey like a story bear.
leaving gloppy cells of honeycomb
on neighbors’ thresholds. By midday I’d hear
Sufi chants from the mountaintop and plumb

the still flutter of hummingbirds in the copse.
Along the routeless road to the Master’s dwelling,
up in a cleft of the mesa, like eagle, like condor,
I saw my friend, last seen in that east coast city: Sibling,
munching nuts and sucking plums. Sitting for hours
to hatch an egg and thus commence Apocalypse.

ORPHEUS PARTIES WITH THE POET LAUREATE

The riot of the tipsy Bacchanals,
Tearing the Thracian singer in their rage.
That is an old device…

The best food ever-a sliver of tofu
marinated with roasted pepper and dill
on barley bread, and from behind, to refill
our drained sangria, the host’s young ingénue,
his houseboy, his cook. The ringing crowd
slipped close enough to rip His flesh as He digressed
about some Polish Prague-Circle linguist
and the meaning disease in which people stowed

words in lost and unlinked recesses of mind.
I knew from the soothing way he spoke
that He was trying to detonate booby-traps,
in deep tunnels, that His way would lead to lapse.
I thought I saw him glare at me, pleasure restrained
that I no longer knew the meaning of Orphic.