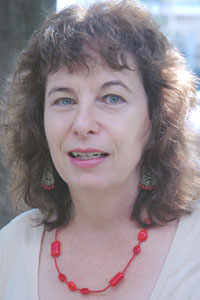 An educator of undergraduates since 1975, Dr. Katharyn Howd Machan, professor in the Department of Writing at Ithaca College in Ithaca, New York, gratefully and cautiously draws upon degrees from the College of Saint Rose, the University of Iowa, and Northwestern University (dissertation: The Writer as Performer) to offer courses in wordplay to people of all ages. Her individual poems have received many awards, including the Ann Stanford Poetry Prize (University of Southern California) and the Luna Negra Poetry Prize (Kent State University), and her 27 published collections include Redwing: Voices from 1888 (FootHills Publishing, 2005) and Flags (Pudding House Publications, 2007). Each March she leads “Writing in the Garden” as artist-in-residence at Nancy Forrester’s Secret Garden, Key West, FL (www.nancyforrester.com). In 2002 she was named Tompkins County’s first poet laureate. She is also, as Zajal, a professional belly dancer and delightedly married to fellow poet Eric Machan Howd (Ithaca College ’90).

The Professor Confesses to Himself

Now, truth to tell, he really hasn’t much
experience with women. Oh, in school,
before his wife, he played some feely-touch
with fellow frosh, but mostly felt the fool.
Since marriage he’s produced a son or two,
but sex remains a weary weekend rule,
a quick dumb act devoid of me-and-you,
a solitary dip in a dark pool.
What lies ahead now that he has a job
instructing svelte nineteen-year-olds to write
deep stories of their lives, each smile, each sob
excuse for private conference, some at night?
He walks a little faster, lifts his head.
What was it his department chairman said?

The Professor First Comes to Grips with Spring

He comes to haunt the streets where she moves slow
and easy down the rows of daffodil.
Her hair blows soft and he begins to know
a hunger far beyond his strength of will.
She writes him poems sore-tried by student pen
in bland assignment, but they pierce his heart
as though she were a master of deep Zen
blessing him with the wisdom of her art.
“You write so tellingly,” he scrawls in red.
“Such sensitivity in youth is rare”–
all while he can’t help picturing a bed
with her stretched out upon it, bold and bare.
Semester’s end is coming; can he wait?
Yes: A+ first, then–paradise!–first date.

The Professor Is Paid to Read His Poems

After the punch supposed to come from green
Hawaiian Isles, the cookies without taste,
the questions about what his couplets mean
and shouldn’t poets treat nuclear waste,
he turns at last to see his sponsor smile
and hand him what his soul’s endured this for:
the envelope which he must wait a while
to open, nay, must seem now to ignore.
It’s common knowledge that a poet’s needs
are few–a pen, a glass of wine or two–
and like an air fern his whole being feeds
on atmosphere, beyond what cash can do.
He plays the game of paying pay no mind–
then later finds the check was left unsigned.