Hank is a professor at a state college on the Mississippi Gulf Coast who ponders questions about his brother/colleague’s sanity as well as his professional self-destruction, self-exile, and eventual disappearance in a coastal swamp. Hank enters into an uneasy, sexually tense friendship with Callie, an emotionally unbalanced colleague with nebulous family ties to an underground power structure which has suffused Hank’s own world in ways he has never suspected, including his brother’s disappearance and the identity and death of Hank’s wife. Then there is Horace: physically grotesque and presumed to be mentally challenged, who becomes an unlikely sage in Hank’s attempt to recover something of himself. In the days leading up to Hurricane Katrina, the series of revelations increases in intensity, the Gulf becomes more erratic, intensifying along with the crises in the characters’ lives, and reaches its crescendo in Katrina’s landfall and concludes in her aftermath. 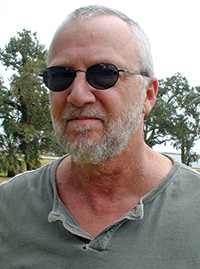 A native of Jackson, Mississippi, Donald Mangum earned a PhD from the Center for Writers at the University of Southern Mississippi in Hattiesburg. His fiction has appeared in a number of periodicals, including The New Yorker, The Florida Review, Mississippi Review, Indiana Review, and Confrontation, and has twice been nominated for the Pushcart Prize as well as published or republished in various textbooks. He lives with his wife on the Mississippi Gulf Coast, where he teaches philosophy and English.

Donald Mangum’s The Roar Beneath is an exquisite short novel, vigilantly observed and stunningly written, a breeder of all the great pleasures of reading. Set in coastal Mississippi, which is depicted with such care and precision that any reader who has ever been there is instantly brought home and readers who have not are seductively initiated into the coast’s striking beauty, the novel delivers a wonderfully motley crew of wry, sad, desperate, and gleeful characters into whose lives the reader is instantly swept. A marvelous first book for Donald Mangum. —Frederick Barthelme   In The Roar Beneath, Donald Mangum juxtaposes the absurdity of the politics of academia with the indifference of nature, creating a hilarious but haunting—in other words, deeply human—narrative. Mangum’s sentences are as vibrant as the landscape he describes, and he is a master of dialogue. He shows us the “beauty in the wreckage” with “the sheer vividness sometimes only dreams can bring.”  —Jordan Sanderson, PhD, author of Abattoir (Slash Pine Press)

I am sitting on a seawall on the Gulf of Mexico, drinking beer and shooting at fish with a Crossman air rifle, which I bought this afternoon for twenty-eight dollars. It feels light and flimsy but with ten pumps has a muzzle velocity of six hundred feet per second, equal to a twenty-two short. The seawall was built to protect an artificial beach from erosion by storms in the Mississippi Sound. As it turned out, the beach was never built, nor was the gated community for which it was intended, the whole thing conceived as a result of a miscalculation by a developer from Chicago, who eventually disappeared after losing everything he owned to the casinos. Besides the seawall, there are only a main street and a series of cul-de-sacs jutting eerily into the weedy fringes of grassy marsh, now slowly succumbing to tide and weather. In fact, the place does attract a regular company of vagrants, drunks, horny teenagers, and low-budget sportsmen, all in all a fairly sociable bunch, albeit armed on occasion. This morning I was pulling crab traps in my skiff. A couple of hundred feet off, where one of the roads has already begun to crumble into the Gulf, a couple emerged from some dilapidated behemoth of a vehicle from decades back and began to stretch. The man started to piss, saluted, and said something to the girl, who then lowered her jeans to display a magnificent pair of buttocks, of which I waved grateful acknowledgement. Now the water stretches flat and red to a dappling sky over Point Cadet. The rare north wind has died, and the salt and oyster and sulphur smells of the mud flats have drifted back over land. A C-130 Hurricane Hunter drones its descent over Biloxi Bay and into the airbase behind town. Casino Row lights the skyline a pinkish green. At the other end of the seawall, a waist high blue heron gives up on something too big to swallow, squawks, and lifts itself into the air. I consider the possibility that my brother is insane. He lives holed up in a boat up in the St. Louis Bay, eating mainly fish and doves and robins, building crab traps for beer money. Every couple of weeks, I load my skiff with ammunition, trap wire, things he can’t get at the local marina, and make the run up into the marsh, returning with a boat load of traps to sell. He says that the country is in implosion – that it has reached a collective psychosis – a land of the willfully blind where law trumps civility and the economy sanctions turpitude, that we have acquired a mythos of abstractions, giving lip service to religion when it suits our otherwise empty delusions of righteousness. He’d been threatening for some while to leave his post at the university, citing the usual claptrap of academia, the careerism of administration, the proud ignorance of students, etc. One day he assigned a student an F for cheating on an exam. The student went immediately to the Dean, who summoned my brother to his office, demanding to know why he had given a test so difficult that students thought they had to cheat to pass. His next professional activity report listed a work in progress which he described as “a porno-philosophical exposition in verse,” this within a year of his eligibility for promotion to associate professor. It was about that time that our mother’s brain pretty much exploded while she was in the bathroom cleaning the tub – a cerebral hemorrhage from out of the blue, the onset of which caused her to knock a hole in the wall with her head and die on the spot. Died at least as far as he was concerned, this in spite of the doctors’ insistence that they might be able to prolong her “life” to one “critical juncture” after another, beyond which – who knows – there might be the possibility of “partial recovery.” That’s when he walked – refused even to enter the room with her, declined to give notice of resignation to his school, loaded his skiff and headed up the bayou. Thirty yards out, a popeye mullet begins a series of leaps, flapping back onto its side, in perfectly regular procession. I take aim at a spot above the water three feet ahead of the fourth re-entry. The fish erupts from the surface at the exact angle, glints silver in the rifle’s sights, then slaps back down with a crack. I move my aim to a fighter jet on take-off from the base, trailing exhaust against the pink sky, and squeeze the trigger.

If you want to read the rest of Donald Mangum’s novella, The Roar Beneath, order now.