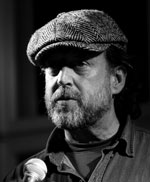 Mark Terrill was born in Berkeley, California, shipped out of San Francisco as a merchant seaman to the Far East and beyond, studied and spent time with Paul Bowles in Tangier, Morocco, and has lived in Germany since 1984, where he’s worked as a shipyard welder, road manager for rock bands (American Music Club, Mekons, etc.), cook, postal worker and translator. Recent books include Bread & Fish (The Figures), Kid with Gray Eyes (Cedar Hill Publications), and his selected translations of Rolf Dieter Brinkmann, Like a Pilot (Sulphur River Literary Review Press). Other writings and translations have appeared in several limited edition chapbooks and more than 300 magazines, journals and anthologies worldwide, resulting in three Pushcart Prize nominations, with four of his poems included in the anthology Ends & Beginnings (City Lights Review #6), edited by Lawrence Ferlinghetti. His work has been translated into French and Portuguese, and recently he’s performed his work in various venues in Amsterdam, Berlin, Paris and Prague. He is a regular contributor to Rain Taxi Review of Books and was guest-editor of a special German Poetry issue of the Atlanta Review, forthcoming in 2009.

Precocious, to be sure, the tendencies not yet sorted,
but even at seventeen, one should know better—
bounding up the stairs of Lyle Tuttle’s Tattoo Parlor
on Seventh Street next to the Greyhound Terminal
in San Francisco where skinny little punk Allen Ginsberg
once toiled in the baggage room—

From behind a measured grimace I watch Lyle himself
jab a crude skull & crossbones into the white
unmarred flesh of my teenage forearm,
ink & blood running together as only a poet could see it—
the first of many gestures toward all those who might
take me for something that I’m not.

Walking down a road
in rural northern Germany,

cozy glow of farmhouse windows
through which can be glimpsed

in such an odd & lovely way,
like a Salvador Dali painting

infused with all the wily grace
of a thousand Dalai Lamas.

A Poem for Patriots

The squeak of the ironing board in the next room,
Joan Baez murdering Bob Dylan in the background;
red, green, blue and yellow plastic Easter eggs
swinging in the breeze in the neighbors’ trees;
the words—purblind yet mercurial
can still only say what the words mean.

On TV between shots of suicide-bomber carnage
and discreet mini-camera shots of the underside of
the turned down cards of tournament poker players
I saw in a documentary how the American lotus
grows up out of the same mud and muck
like any other lotus in the world.