* * *This title was selected for publication as a result of finishing as a runner up in the 2008 MSR Chapbook Contest.* * * 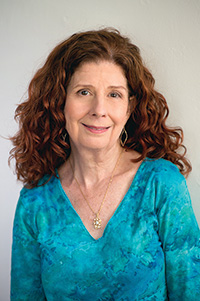 Pat Riviere-Seel is a recovering journalist who lives in the mountains of western North with her husband and two spoiled housecats. They share the woods with black bears, wild turkeys, and numerous other wild creatures. Pat often composes poems while running trails and the Blue Ridge Parkway. Her first collection of poems, No Turning Back Now, was published by Finishing Line Press in 2004 and nominated for a Pushcart Prize. Her poetry has appeared in numerous literary journals and anthologies. Pat is an associate editor of the Asheville Poetry Review and past president of the NC Poetry Society. She has taught poetry at UNCA’s Great Smokies Writing Program and College for Seniors. She holds an MFA from Queens University of Charlotte.

Pat Riviere-Seel’s The Serial Killer’s Daughter lays a heavy burden on its reader: a burden that asks the reader to hold the tension between the emotions of anger and desire for vengeance and the emotions of pity and compassion. Merging her experience as a newspaper reporter with her esteemed poetic skill, Riviere-Seel has transformed a journalistic sensation into a work of terrible beauty. This book moves us all, in the end, toward an unknowable continent, which is, perhaps, the human heart in all its vast complexities.

I. About the Daughter

The serial killer’s daughter hangs damp sheets on the line.
She likes the yeasty way the wind fills the cloth and how the sun sweetens the
threads.
When she holds the clothespins between her teeth, she tastes bread and salted butter.
She no longer worries about trying to hold on to the brass pole of the carousel.
The serial killer’s daughter can hold anything – or anyone – she pleases.
Preferring familiar company, she surrounds herself with dahlias and lavender.
She always rides the wooden tiger because there is no bear.
Why are the animals always one step ahead of the humans?
The serial killer’s daughter knows how frightening a creature walking upright can be, so
she always walks as if she were about to waltz.
Her hands write a language only she can read.
She’s not a figment of anyone’s imagination.
She is sunlight striping murky swamp water.

The serial killer’s daughter wears tight curls made of cypress roots and washes them in
buttermilk from the moon.
When mud oozes between her toes she no longer worries about wiping her feet before
stepping through the door.
She likes to touch people she loves on the nape of the neck and feel the rocky landscapes
of their spines.
Her heart measures her intentions and stretches them in a chain around her wrist so she
will not forget.
The serial killer’s daughter waits for no one.
It never matters if she is on time. Whose time?
Time is irrelevant, like memories she saves and forgets.
Because her life needs seasoning she grows spearmint, basil, and lemon balm.
The serial killer’s daughter is always leaving Robeson County.
For her, the stone covered with moss and mica that she carries in
her pocket contains a galaxy.

When I close my eyes to invite
sleep, your face floats

before me. Your smile twists —
and I know, Mama.

The man you married
after Daddy died, old

and sick but nowhere
near dying: you nursed

his demands, his disapproval.
I know what you did, Mama, when

he complained about your pills,
threatened to leave.

while you waited out of sight. I know
three people in your care failed.

Two died. I know Granny, your mother,
gave what a mother would. You stole

her money for the handful
of yellow pills that kept you

bleary-eyed and stumbling or
unconscious in your room.

Granny never sick a day until
she discovered her savings gone.

One week of stomach flu and
she died too. I know, Mama,

this man you aimed to marry died
the same way, by your side.

I know how you consoled his daughter,
your quick tears on her cheek.

I know what you say,
how your words slide over

the edge of belief
until you convince yourself

your grief is real. I know, Mama,
someone has to stop you.

I don’t know exactly
when I will die,
how, or where.
But Mama knows,
within minutes, seconds.

the periwinkle blue dress
with lace ringing the collar
that she’ll be buried in.
She’s picked the hymns,
scripture the minister will read.

Her choice too,
the method — familiar.
But will the anesthesia
that rushes her into sleep
allow her time to recall

that other poison she chose,
or how her victim’s faces twisted,
their last calls for relief
while she stood
beside their beds —