This novel is the sequel to Leaving Maggie Hope, winner of the 2003 Novello Literary Award. 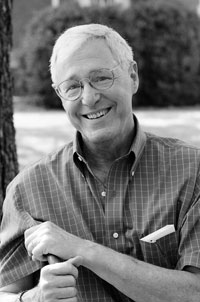 His major fields of interest are modern drama, creative writing, and literature and religion. He has directed eight plays for the Davidson Community Players, including Inherit the Wind, The Miracle Worker and A Man for All Seasons. He is the author of two critical studies, Shaw and Christianity (1965) and The Vital Lie: Reality and Illusion in Modern Drama (1989). His poems have appeared in numerous magazines and journals including New England Review, Southern Poetry Review, St. Andrews Review, Pembroke, Tar River Poetry, Theology Today, and Anglican Theological Review. His first book of poems, The Girl in the Yellow Raincoat, was published by St. Andrews Press in 1989 and was nominated for the Pulitzer Prize. His second poetry collection, A Small Thing Like A Breath, was published by St. Andrews Press in 1993, and his third, The Search for Wonder in the Cradle of the World in 2000. In 2003 his first novel, Leaving Maggie Hope, won the Novello Award and was published by Novello Festival Press. The novel won the “Gold Award” from ForeWord Magazine in the literary fiction category. With Professor Daniel Rhodes of the Department of Religion he developed a course in “American Literature and Religious Thought,” and after Dr. Rhodes’ retirement, he developed his own course, “Three Contemporary American Prophets: Flannery O’Connor, Frederick Buechner, and Walker Percy.” He has lectured widely on these three authors to both church and secular groups in North and South Carolina.

“Sex, religion and art are The Three Great Secret Things which fourteen-year-old David Lear must comes to terms with in this lovely, thoughtful story of self-discovery. A timeless, classic novel for readers of all ages, Tony Abbott’s novel is especially notable for its emorable characters, its authenticity of time and place, and its beautiful, beautiful writing. The compleeing story draws the reader toward one of the great endings of alltime.”

“Youth’s a stuff will not endure”—thus saith the poet. Yet it does endure when brought vividly into present time by a novelist who is a close and sympathetic observer. In The Three Great Secret Things we see David Lear emerge from a not-too-protective chrysalis to try his wings in our dangerous, tempting, and colorful world. Anthony S. Abbott writes with transparent clarity and with a charm born of his enchantment with his subject. Utterly engaging!

The Three Great Secret Things takes us back into that strange era, that oddly innocent time, when a boy could lose his heart to God, poetry, and a bright sassy girl all at once—and on purpose.  Anthony Abbott treats his boarding-school characters with great tenderness and respect, following young David Lear as he pursues the three great loves that secretly ARE his education (and the sassy girl is one we won’t forget for a long time to come).