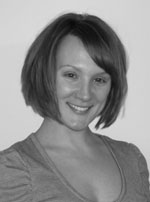 Lauren Schmidt
Lauren Schmidt’s work may be found or is forthcoming in The Progressive, Alaska Quarterly Review, New York Quarterly, Rattle, Nimrod, Fifth Wednesday Journal, Ekphrasis Journal, Wicked Alice and others. Her poems have been selected as finalists for the 2008 and 2009 Janet B. McCabe Poetry Prize, the Pablo Neruda Prize for Poetry, the 2010 Dancing Girl Press Chapbook Contest, and she was awarded first place in the So to Speak Poetry Prize in 2009. She teaches writing at Brookdale Community College in New Jersey.

You can tell from the title that The Voodoo Doll Parade is not going to be a collection of sweet effete poems. Lauren Schmidt is out to challenge convention and shake things up as evidenced by the poem “Prayer For My Former Principal After Being Fired From My Catholic School Teaching Position For The Publication of a Poem About Masturbation.” In case you still had doubts she gives us, “My Grandfather’s Balls.” Schmidt looks reality dead in the eye and while her language is potent, controlled and precise, she refuses to make things prettier than they are. Instead she asks us to look where our eyes might turn away and gives us a powerful lens through which to see.

When the man outside the liquor store collapsed
like a denim sack, when he wailed and moaned,
recited the Hail Mary, lying on his back,
when he grabbed his gut, kicked his legs
as if running fire out of them,

I knew he was one of us.

I knew that some lover had his likeness
in her hands. Some lover had “You Oughta Know”
blaring from her stereo. In her room,
the blended stench of nachos, margaritas,
and acetone. A cleansing mask swooped
around her T-zone into a wicked, jokered grin.

I knew just how she made his twin:

First, two sticks tied, an ice-pop crucifix.
Spanish moss twined into muscles
and limbs. Canvas pulled and stitched.
Next, she sewed X’s for eyes like a cartoon
drunk from a bottle marked skull & crossbones,
his lips inked in a slivery smile.
She left him naked, drew pecs like saggy breasts,
squiggly lines out from which limps a shriveled dick,
a pair of balls with eyes and a frowny-face.

When he whirled to his side, I knew

that meant she tossed him to her girlfriend
who stabbed him through the head.
Passed again, another takes her turn,
peppering small holes over his chest
before driving it up into the forlorn sac.

At last the sirens arrived: a stake driven
in his backbone. His jaw unhinged,
tongue sagged from his mouth,
a chewed and bloody strip of bacon.
Bottles of beer rolled from his bag like exotic women.

Yes, he’s one of us now. He will be in line tonight.
At first, he’ll be looking for the floats and dancers,
the barbershop quartets. He’ll be wondering where
the banners might be, the beauty queens
waving from the shoulders of Chevrolets.
But it’s just us, like him, figuring,
Who would have put me here?

At midnight the marching will begin.
We’ll sprout their pins like urchins of the sea;
We’ll be their barbed St. Sebastians,
their Christmas-bulbed trees;
their maps of waged war, their holiday destinations;
bull’s-eyes in dive bars staggered with hits.

We’ll all wince in the ills they inflict upon us,
and no one’s unasked for, or ever allowed to leave.

Such defenseless skin. Wisps of silver spring
from our hearts, our spines, our X’s for eyes
while inside, our human stitch unravels.

You just couldn’t handle it, J–
the poem, or me, J, the rough-
mouthed Magdalene from Jersey
who skips Sunday Mass to gather
her rosebuds, who eats apples without
washing them first.

I can just see you, J: three days
of praying, dropped on your knees
in your bedroom Gethsemane,
fingers wrung, white-knuckled.
Like an orb of unleavened bread,
locked palms are raised to night’s sky.
Her shapely, chalice-hips are stiff
with waiting beneath the shroud
of cotton sheets. But, no, J, you
are on your knees, halos flaming
in your finger-beds. I know you
anoint yourself

on Sundays, J, fingers just dipped
in the holy dish, wet like my fingers wet
from my beating clit, but you know
how the poem goes. You can’t sleep now
because of it. You pray, still pray
that you’re a good man and wise,
everyday-devoted, pray you’re humble
before the only God

on high. Amen. Today, it is my turn
to say a prayer. I pray
that your wife uncrosses her legs,
folds my poem between the thighs
of her Bible, feeling the print that spells
a sin worth losing heaven. I pray
she shrinks away from you,
and flinches at your cold
and crooked fingers.

In a flash, you wane into a milky visage
who is always confused and can’t stand up
straight, who lies in the snow for half an hour
figuring how to get up even if you’re ninety
and your ankle is broken in two places.

Your jugular thumps in your neck: that vein
like the crook of a tree you used to sit in when
you used to sit in trees. Now, from the ground,
you stare up into branches, nicked rafters
of memory’s cathedral, taste the sweat slicking

your lip and remember, suddenly, how
your mother licked the ocean from your arm
the day you explained your sunburn
by sitting next to the window in math class.
It occurs to you to believe in God because

you were a god once, and now you’ll believe
in anything. But belief hooks in your throat
like a broken bone while you try to unleash
some syllable so not to be speechless in the face
of things you cannot name. Not the word

God but Remember, because everything
you ever knew shakes away in the cold scent
of December. Eyes close as that years-ago ocean
rushes to your ankle. You hold it there:
the presence of that day, that sea salt, that sun.