The Way We Came In / Jack Johnson

The Way We Came In 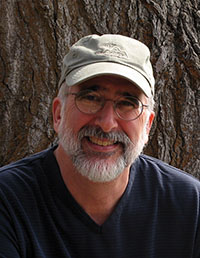 Jack Johnson was raised in Peshastin, Washington, a small town near the Cascade Range. He received his M.A. in Literature from Southern Illinois University and worked toward his PhD while a teaching fellow at the University of Denver. Upon returning to Washington, he and his wife, Devera Sharp, built their own house and raised two sons there. The field where they built is now a forest made up of the trees they began planting forty years ago, accomplishing their dream of having a small home in the woods. He teaches English and Philosophy at Wenatchee Valley College.

In this collection’s elegiac title poem, an uncle, blind with glaucoma, gives driving directions for a visit to the family’s old farm, describing landmarks he can no longer see. That familiarity—the map in the mind’s eye—informs the movement of Jack Johnson’s The Way We Came In, paying attention to the guides who have led him, painting them in place, showing them real affection without affectation. It’s a good read. ~Joseph Green

Jack Johnson’s poems are not so much preoccupied with his dead for being gone as for the way they linger and keep speaking. He finds moments that stand in for whole hard lives and dignifies them with plain-spoken, musical lines. The Way We Came In is a wise and wistful pleasure. ~Kathleen Flenniken, author of Plume

The title of Jack Johnson’s collection The Way We Came In is a blind uncle’s response to the persona’s, “I don’t know the way.” Johnson maps a generational journey steeped in familial love. He celebrates the intimacies, whether it’s a wife’s shower singing “with full heart a song/about roses and tears” or a child’s prescient “wanting/the word after/the last word.” Johnson unearths the decency of people from river rock to blue sky. ~Kevin Miller

Giving Up the Alphabet

I thought about the world in words,
the way streams sound, purling
over stones worn round, the wave of green moss
under pellucid currents, or the way a roan stallion
gallops—mane and tail flying, the curve
of back and haunches, hooves burning the grass.
Or the words on a tombstone planted
in earth, the whole mourned Necropolis.

When I give this up for Lent to live
in a letter-less desert, I dispose of the past,
the future, crush them like empty beer cans—
only sight, touch, smell, taste, sound—
no alphabet to put the world in.
My cats adore me; my dog whimpers at me.
Without my tongue I drift rudderless
along a bright shore in my dreams.
One night I taste my thumbprint,
the nail, the knuckle wrinkle.
Finally, I stop searching, rest
in scented silence and listen to nothing.

Forty days I live without the rhythmic song
of my own voice. When I sit down
at table with friends to feast on lamb,
I take a sip of red wine, clear my throat before
I un-tomb my word hoard with “now, now, now,”
as though, preparing to mount, I’m calming a skittish stallion.

When a Great Northern swallows the tracks,
we work in the garden without talking.

We leave our weed pulling
to walk the fire trail to the river.

A car’s wheels hiss up Derby Canyon.
The Wenatchee crawls below the rail bed,

winds toward the Columbia.
We glimpse an osprey overhead

and try to spot a catbird
meowing high in pine branches.

We hear quail rattle the wild roses,
the snow berries. So–

his flat head balanced above his tail,
the sudden rattle,

a Rainbird sprinkler striking tin.
All things move in coils.

In smooth roots and yellow grass,
the sky disappears.

After the long hike to jade-colored lakes,
we feast on steaks and potatoes and apple cobbler.
Passing around the wine and brandy,
we laugh about the falls on snowfields,
re-enact the dance done to the sting of swarming wasps.

The ground-bench grows cold and glaciers
swallow the dying sun.
Tonight we sleep a sound sleep.

After bacon and eggs and coffee,
we make our way without ropes
over frozen snow toward the ridge where
cornices catch the morning sun,
and the rush of shadows become
ravens winging their way from the forest below.

Standing beside your coffin,
the final measure of your capacity,
I couldn’t remember the name of the cancer
that killed you. Your hands

empty, calluses gone.
Once you told me

life begins as birds, the flight
of geese-fresh life, hands cupping air
first the wings of birds.
You were large and alive
and I was trying to imagine
the nest where the first flying begins.

Dying, a tumor by this time in your brain,
you watched blackbirds
crawl across the ceiling of your room
the dust from their feathers
sticking to the inside of your lungs.

Early morning keeps returning
birds to the eaves of my house,
your death clear as the sound of claws
catching at wood.