The Wild Side of the Window / Irene Fick 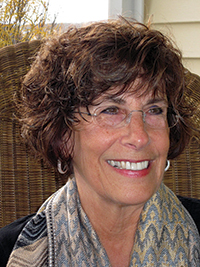 Irene Fick lives in Lewes, Delaware and is active in the Rehoboth Beach Writers’ Guild and Coastal Writers. She is a former newspaper journalist, and also directed community relations for a major medical center and co-authored a book on cancer care ethics for the Pennsylvania Department of Health. Irene’s first chapbook, The Stories We Tell (The Broadkill Press), received first place awards from the National Federation of Press Women and Delaware Press Association and her poems have been published in five anthologies and in journals such as Poet Lore, Gargoyle, The Broadkill Review, Philadelphia Stories, Adanna, Mojave River Review and Pittsburgh Poetry Review.

The poems in Irene Fick’s The Wild Side of the Window are artful, compact, and often funny, even when contending with grim subject matter like cancer or divorce. Fick isn’t afraid to make herself vulnerable, or to write unsentimentally about things that are sad — but for all the losses that they record, these poems aren’t about death; they’re about lived experience seen in hindsight, and life relished in the moment. –James Arthur, author of Charms Against Lightning

In The Wild Side of the Window, Irene Fick captures our most human attempts: a wife as dancing queen in “flannels and fuzzy socks,” a mother waking and forgetting momentarily that she has cancer, and a woman wondering what it’s like to die in Kmart. With startling images and thoughtful line breaks, Fick guides the reader to discovery with each poem. Adrienne Rich said, “Poems are like dreams: in them you put what you don’t know you know,” and Irene Fick knows this. –Ethan Joella, author of Where Dads Go and A Prayer for Ducks (forthcoming from Red Bird Chapbooks).

Irene Fick’s poems touch on many of poetry’s most enduring subjects—family, memory, aging, love, and loss—but with unexpected verve and blinding flashes of humor and wisdom. The past comes alive in poems about lace bikinis and the lure of cigarettes, but the future we all fear is never far off. If you’re a woman of a certain age—or a man who loves one—The Wild Side of the Window is the book for you.—Sue Ellen Thompson, winner of the 2010 Maryland Author Award and editor of The Autumn House Anthology of Contemporary American Poetry

Sex on the Sand

On the shallow slope of sixty, this slide
into old age, I wonder, in an idle way,
as we stroll along the water’s edge,
what it would be like if we mustered up the grit
to have sex here on the sand
before it’s too late, before we shrink,

become another old pair, two gray silhouettes
curved over silver walkers
as we make careful passage down railed hallways
for the four o’clock serving where table talk starts,
stalls, then settles on portion sizes, ailing joints,
who will succumb to the cherry cheesecake?

Will we rue the day we turned down
the chance to play Burt and Deborah, find
our own secret eternity on the edge of the Atlantic,
where the waves pummel the shoreline,
where we would have unzipped, stripped,
sprawled on some illicit dune, flushed, breathless,
ignoring the sand needling our sweaty skin.

Well. This is how I imagine it. In truth,
sex on the sand is just a reckless notion, like sex
on the kitchen table, or sky-bound in the jet’s loo,
or pinned to the walls of a high-rise elevator,
a titillating story to relish, shock old friends.

Now, on the shallow slope of sixty, our limbs
no longer stretch and straddle at will. They prefer
to lie on a sleep-numbered mattress with clean
cotton sheets. For now, for us, the ceiling fan
dispatches a gentle breeze, the noise machine
from Walmart whooshes ocean sounds,
and the two of us sink, as always,
into a familiar pattern of flesh upon flesh,
a cushion for all that comes next.

She is 18, just out of school, primed
to join Manhattan’s workforce. Her high heels,
new gabardine suit show off curvy calves,
a tiny waist. Her lips are scarlet, her hair,
like Hedy Lamarr, long, black, silky.
Someone, perhaps a suitor, offers her a cigarette.
She accepts with a coy smile. She gags
with the first few inhales. She persists.

Her cigarette smoke snaked
through each room. Nicotine stained
the wallpaper, place mats, tablecloth.
It scarred the new chairs from Sears.
The air was dense and gray but I paid
no heed. I thought breathing
was supposed to be hard.

Mom sucked in four packs a day, swore
she’d give up her children
before scrapping her Marlboros.

When Mom ran out, she’d send me
to the store for a carton. I’d mount
my Schwinn, pedal fast, get home barely
in time to catch the afternoon school bus.
This was before Mom learned to drive,
before I learned to talk back.

I lit up for the first time in college, thrilled
to hang with the cool girls in the dorm.
In our sweats and jumbo curlers, we puffed
on Virginia Slims, flicked the embers
into plastic ashtrays.

Home on break, I smoked all day
with Mom. We spoke without rebuke,
swapped stories at the kitchen table,
fumes embracing us in a single cloud.

Tobacco trailed me, two packs a day,
through cross-country moves
and pushy men who wanted me
to quit. But the men paled
next to the slow exhales, the deep,
intoxicating drags.

At 29, I fell asleep clutching a lit
Winston. That year, I stopped ignoring
the cough that rooted in my chest.
That wretched year, Mom’s rotting
lungs failed her.

Now and then, I catch a whiff
of that stale, familiar scent, curse
the serpent that settled, remained.

The bargained bliss of wedlock
began to wither before we unwrapped
the last gift, before I whispered
to Mom, keep the receipts, before
I stacked the melamine dishes
in the new hutch, color-coded
the towels, stocked the kitchen
with so many pretty things
I did not know how to use.

I knew this: the knot of dread
as the bottles ran dry, as he cradled
his Johnny Walker, silent and slack-jawed
on the plaid sofa from Goldblatt’s.
I found his loaded gun, and I lost
those long and hollow nights
when he didn’t come home.

I turned to Mom and Dad
who called the Italian attorney,
Anthony whatever, the one
with fancy suits and a full head of hair,
to fix my failure, to begin to dissolve
what began a year ago in a white march
down a holy aisle, witnessed by family
who flew in from back East, family
who wished they had kept the receipts
for all those things that would help me
set up house, all those pretty things
I didn’t know, at 19, how to use.