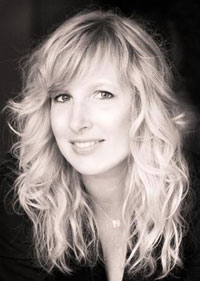 Nicole Hardy is the author of Mud Flap Girl’s XX Guide to Facial Profiling, which was a finalist in Main Street Rag’s 2006 chapbook contest. She earned her MFA at the Bennington College Writing Seminars, and was nominated for a 2007 Pushcart Prize. Her poems have appeared in Margie, 5 AM, Eclipse, The Red Wheelbarrow, and Meridian Anthology of Contemporary Poetry (among others). She lives in Seattle where she works as a waitress and a teacher and sometimes updates her website, hardygirl.com

I wonder how many men who wear their socks in bed will fall in love with the poetry of Nicole Hardy. One opens this book excited, as if seeing Marilyn Monroe for the first time. Hardy uses popular culture like lipstick and she knows how to kiss. This Blonde is fun reading and very seductive.

With tenderness and panache, Nicole Hardy bares her blonde ambition, from holy roots to platinum dazzle: In each blue-funk Sabbath possession/I’m the small screen starlet, sand-stranded/beyond the fishnet rescue/of an evening gown. Waitressing, dating, going to church, scripting her made-for-TV movie, her speaker is sweetly carnal, alertly intelligent, tart but compassionate, hungry but patient, “trained to wait as long as it takes/for the secrets” and equally enamored of the surface clues, Austrian beads circa 1940,/mint dental floss, a three-pocket apron/filled with small bills. In its rueful bravura, This Blonde is a fresh delight.

What I Did Last Summer (and since)

Vince the union boss
in dark glasses and a pinky ring
may have been the first to notice:
I’m a peach.
And though I lack courage,
cleavage, a signature scent-
there is something of me
people envy.
I sample produce before I buy, flirt
shamelessly with strangers,
knowing no man will leave me
without a story. I chucked peanuts
at Wrigley field, spent last
Valentine’s Day in jail, accidentally
slept in one of Ted Bundy’s
killing rooms. I became a bartender,
trained to wait as long as it takes
for the secrets.
James Bond never sauntered in,
didn’t ask me to make his martini,
dry or otherwise,
but I came prepared
to finish what I started:
slide velvet down the slow curve
of a Crown Royal bottle, set it aside,
and then turn to ice, vodka,
vermouth, and olives. I’ve learned
that most things depend
on timing.

In the movie version, my problem
is something no one talks about; so I take
pills or yoga or strangers home
to bed. I’m obsessed with needy men
or cleaning the bathroom until
the smell of bleach makes sleeping
dreamless. I used to cut myself
but kabbalah and Dr. Drew have put me back
on track, except I’m oh so lonely
alone with my heart of gold.
In the movie version, he’s a detective
who’s lost his edge and drinks
from a flask hidden in the bottom drawer
of his desk; or he suffers from survivor guilt
and doesn’t know how to sleep anymore.
Maybe a certain case broke
something inside and no one can fix it
especially his partner
who keeps renting Lethal Weapon, hoping
for an epiphany and better action scenes.

After the writers have established
all of the above, there’s a call from the sergeant,
who says an accident rolled
my car over a cliff. Mysteriously. He says
there was no body, no identification.
And just maybe it was no accident
after all. Instead of tracing the license plate,
the detective follows a hunch,
because in order to get to know her,
or should I say me,
and to increase the dramatic tension,
he must carefully examine what was found:

The detective smiles for the first time
since the opening credits–
the director not allowing anyone to miss
his epiphany: this is the girl who could make any man’s
heart remember beating. The detective vows
to find her, or should I say me,
but these clues, carefully catalogued, don’t lead
to a one-armed man, or the bed of a river
where I’m not busy reed-breathing
under waterscum and algae,
or to an abandoned barn where I’m not
recovering from a headwound with the help
of a recently escaped convict, or suffering
from amnesia, or both. The third act
is dedicated to the mystery
of what will happen when he finds I’m just a girl
who forgot to set the emergency brake.

I got promoted from the basement
the day the FBI came looking
for the Unabomber. The agent flashed
her badge, and though she looked
more research librarian than Mariska
Hargitay, she was given access
to the archives, clues to the machine shop
where Ted Kaczynksi clocked out
and in the year I starred
in Mrs. Williamson’s kindergarten
class, prodigious in my memory
of the alphabet and how to set the table,
spoon standing guard over the knife blade.

Before that promotion, I spent the summer
stuffing envelopes, telling stories
about Art, our own basement Boo Radley.
We hid the scissors when he walked by,
forgetting on purpose the moral of that story.
It was the longest, hottest summer
in Chicago’s history if you chose to believe
the local anchorwoman-so I laid all bets
on a young Paul Newman, wished to God
he’d press me up against a wall late one night
in Big Daddy’s store. Instead I got the news,
weeknights at five, bodies stacked
in refrigerator cars outside the morgue;
bad luck, their showing up
after all the good seats sold out.

Musician between gigs, actress out of work,
first-year teacher, we were sleepy, sneezy,
grumpy counting the minutes to lunch
and the light of day. We sat apart
from the others, separated by our advanced
degrees; one found unexpected satisfaction
in the neat piles, the muscle memory
that let her mind go blank, two thousand
“renew your ad” letters folded, stuffed,
and stamped before break. The other quit
high school just last year, had a thing
for Ivan the forklift driver, was ready to quit
this shitty job over not getting a five-cent raise.
We sat in judgment-overqualified,
overeducated, over thinking two bucks
a week is worth that kind of rage.