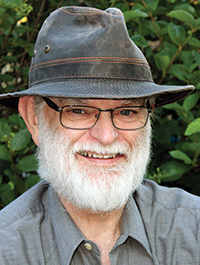 Tim Hunt is originally from the foothills of northern California, he and his wife, Susan, now live in Normal, Illinois. His poetry collections include Fault Lines (The Backwaters Press) and The Tao of Twang and Poem’s Poems & Other Poems (both CW Books). Chapbooks include Redneck Yoga and Thirteen Ways of Talking to a Blackbird (both Finishing Line). He’s been awarded the Chester H. Jones National Poetry Prize and nominated for the Pushcart Prize three times. His academic publications include Kerouac’s Crooked Road: Development of a Fiction (University of California Press), The Textuality of Soulwork: Kerouac’s Quest for Spontaneous Prose (University of Michigan Press), and The Collected Poetry of Robinson Jeffers (Stanford University Press).

If you grew up with the music of the 1950’s and 1960’s, Ticket Stubs and Liner Notes is for you. But even if you’re a grandchild—or great grandchild—of the iconic Chuck Berry, whom Tim Hunt describes as “that master of ironic innocence and innuendo,” then Hunt’s rockin’ collection is for you too. For the poems in this collection are not just about music; they create it as well as any words on a page ever could. Reading this mesmerizing book, we’re ready to “kneel / and light the guitar” to listen to “shovel and coal, debt, the Company Store / and another day. The actual world.” There’s a world in these poems that never drag, are never out of sync so that we’re no longer “alone in our darkened rooms.” When “the pick is / a hummingbird’s wing,” “the moon hitches / its overalls and eases down into its chair / on some porch behind that hill, leaving / only the dark ridge and spray of stars.” Read this book and you’ll be sprayed with stars. ~Wendy Barker, author of One Blackbird at a Time

When I hear Van Morrison say he’s going down the old mine with a transistor radio in “Brown-Eyed Girl,” I always wonder if young folks are going to know what he’s talking about. They would if they read this marvelous book. In the pleasure it offers and the knowledge it imparts, Ticket Stubs & Liner Notes provides more than a soundtrack to the dawn of the present day—it also supplies a vocabulary essential to our understanding. ~David Kirby

In writing about the Golden Age of Rock and Roll in Ticket Stubs & Liner Notes, Tim Hunt combines reverent allegiance with badass swagger. The guitar gods and gargoyles, heroes, heroines, hippies, and musical rascals that make up his pantheon find a shrewd acolyte in Hunt. In poem after poem, with a keen eye and perfect pitch, Hunt recreates an American soundtrack that turns our mythical exceptionalism on its head, while offering in its place, a vision that aligns Whitman’s freedom with Wolfman Jack’s. It is the record of musical devotion that sought salvation, from civil unrest, unjust wars, criminal leaders, and rampant capitalism, not to mention our own mealy conformism. In this he joins the ranks of such poets as Dorianne Laux, Mark Halliday, David Kirby, and Michael Waters, bards of rock whose own songs explore, through the apotheosis of musical rebels, the longing of our demotic souls. ~David Rigsbee, author of This Much I Can Tell You

This you know for sure. 1958. And you are
eight. On the TV that you now watch
at night instead of radio, Dinah Shore
sings, and See the U.S.A. In your
Chevrolet is somehow like when
your mother clips on your bow tie
and walks you to church, but somehow, too,
all evening gown and Lucky Strikes with ice
cube laughs in a tall glass—so different
from Tennessee Ernie Ford who you
like much better but don’t know why.

But this has to be 1958 because you are
roller skating the sidewalk, the white
button in your ear and you are hearing
something new—over and
over—“The Purple People Eater” and “The
Witch Doctor” and the words are silly,
like being eight and bow ties, as you
skate back and forth as if the world
is your world and you belong in it
laughing because for once you understand
everything.

Here is a photo from Woodstock:
glossy, black & white, tie-dyed
and no mud or bleary eyes stinging
from lack of sleep. You can almost
see the stage. Someone
is up there. Janis? Grace? Jimi?
It doesn’t matter. The photo tells us
this moment is something called
The Sixties, and we can see the colors
even through the half-toned pages
of Life. We can imagine we are
there, were there, never left there. We
can pretend, a moment, there
was no war, no draft, no children
sailing from magic rooftops thinking
the flight was eternity.

Here is another. The car radio
a pale orange glow. On the hill
outside town you are listening
to Wolfman Jack spinning
the Rolling Stones, “Down Home
Girl.” They have never seen
the cotton fields in their song but
you imagine with them velvet skin.
The station, XERB, from Mexico
reaches everywhere and the Wolfman’s
voice rasps low—speaking just
to you. And he is the preacher of the night
hand on your shoulder as he
leads you to a special pew. He is
a sleazy uncle flashing dirty
pictures he almost lets you see.
He is a wild cousin, the one with
a fake ID. He is the one with all
the songs where the singers seem
to know something beneath the words.
But above all he is the voice, and in it
you hear cigarettes, beer, and back seat
sex as the oak tree strokes the dark
beyond the windshield and you
give yourself to the Wolfman
hoping he will lead you home.

In New York you are almost old enough to drink
as you sit at a tiny table and your friends
who have showed you how to ride the subway
explain cover charges and two drink minimums
and how the club tosses you out after the set.
Or makes you pay all over again, because here
this is the order of things—in the real City,
where no one means The Golden Gate when they say
the bridge and San Francisco is just Frisco. But you
pay anyway for an overpriced coke because tonight
Mike Bloomfield will play, and he is your guitar god,
and you have worshipped hour upon hour
spinning East-West as if the blues mantra were not
just a Prayer but the revealed Word—an electric Tongue
speaking the modal truth in liquid bends. But
tonight is “Killing Floor,” the fingers scaling
the neck, twisting the strings into a scream
that is, somehow, still the Wolf’s killing floor,
his Delta, Chicago, a West Side slaughter house
and the floor blood-slick as the black men swing
their sledge hammers to crush the bawling skulls
of the cattle forced, one by one, down the chute,
but, too, your killing field, that jungle
where your friends are already dying to the beat
of the chopper blades, the rim shots of spattered
rifle fire and the napalm’s whoosh, the screams
that are not an electric guitar. And this, too, a truth,
as if the guitar string were a live wire, the electric
shock a scream—the guitar’s scream, your
scream. And then Bloomfield drops
his hands, and stares off over your head,
and when you turn you see The Gray Line
Tour being led through to stare at the band
and gawk at you, as if you are aliens
from some unknown planet and you gawk
back at the ladies in heels with their clutch
purses and the gentlemen in jackets
and ties, and they, too, are exotic. But you know
what planet they are from
because you are from there, too.

Jimmy Reed, center stage, stands juiced and smiling,
as his wife whispers the lyrics up to his ear, his head
cocked as if he’s pausing behind the mule and plow,
listening to a bird in the trees down by the creek.

Strumming, he looks out over the heads of all
us white children who’ve come to hear him sing
as if he isn’t a black man or rather because he is
a Black man, and whichever it is, it doesn’t
make sense. So, he looks beyond the stage lights
as if something real were there
and sings “Big Boss Man”—his song, the one
all the kids with guitars and amps
do as if it made them real, cool.

But here the bass string riff says
I’ve been working all day but I’m not
working now, so gimme a beer and a shot. Oh
Big boss man, you ain’t so big, you
jes tall that’s all.

And we, young and
white, clap to the beat, not hearing
what it might mean for his boss man,
the boss man, the white boss man
who pees in the white toilet, not the one
for Coloreds Only, to be jes tall
instead of Big in all those ways that we,
young and white do not see, just as we
do not see the mask that hides what it means
to pretend the boss man is jes tall,
or how claiming this is a kind of freedom—
an almost saying No. Oh, Boss Man,
You ain’t so big, You jes tall, That’s all and in
the song, the singing of it, it is all—al-
most all.