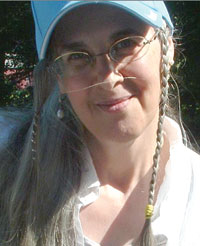 Menoukha Case lives in the Mohican-Iroquois bioregion, the lush mountainous area between the mid-Hudson and northern-Housatonic Rivers. There she studies, teaches, makes art alone and with others, and gardens. She has earned an MA in Women’s Studies, an MA in creative writing, and a PhD in African Diaspora literature through the lens of Yoruba philosophy, from the University at Albany.

The poems in Tidal River Sediment resonate aurally and graphically as this spiritual daughter of Audre Lorde investigates the pastoral landscape of Albany, NY for an altogether counter narrative to the one supposedly visible. Beginning with an incantation to Lorde and the African god Seboulisa, Case pays homage to all living things, plant and animal life. In this long poem there is a stunning lyric that will ring the ear, not only with history, but with the consciousness of humanity and nature.

–Randall Horton author of The Definition of Place

I. Reading Lorde to Yemoja

It’s not just
the intentional hunger of cars
droning locally
relentlessly
to or away from
the destiny of the dark of the theoretical morning.

It’s not just
the eternal flame of the hallway light
sluicing through the metal grate at the top of my door
smirkily imitating
moonlight
through the pines.

The sound of perpetual highway traversing is
no louder
no less varied
than water
over
rockfall.
Insects in the park sound like
insects
everywhere.

No it is not the
i-dentifiable that presses
slow fists hard on my eyes
crams with disflavor the uneasy cave of my mouth
nor my consciousness
of the process
of identity
that ties my nerves tight
first at this end
then
that.

It’s this
i swear
there’s a hum.

The whole damn place shimmies constantly
not
to the swinging song of the stars but to a
pulseless no beat no heart dead beat non stop
engine of
escape as impossibility.

Tino tells a story of his abuelo, a curandero. Tino is seven and is with his abuela and abuelo in their kitchen. Some men come in y abuela goes out because it is forbidden to witness the curandero at work but Tino — he hides under the table. Abuela does not call him so Tino stays — put –. The men are carrying un hombre he looks muerto stiff like a board and they carry him two by los brazos y two by los piedes and he doesn’t sag in the middle. They lay him on el piso, the hard warm clay piso. Tino sees foam at his mouth. The foam at his mouth doesn’t move he’s not breathing.

Tino listens. Abuelo is using a language Tino has often heard slipping round corners, sluicing through windows in incomprehensible torrents that cease as fast as they begin. Abuelo sings this language walking round the corpse then he opens a box. He takes out something. He hands it to the men and he speaks in Spanish. “His animal twin is a lion. This lion is injured. Take the mountain trail and when it ends go ala izquierda and walk always up always left passing between dos y dos y dos y dos y dos y dos mas piedras grandes, y entonces, you will find this lion where he fell and you must” —
do something.
Tino will not say what.

“This must be done” says abuelo. “The lion will not harm you, he will thank you,
and when you return all will be well”.
And they do.
And it is.
In a little while abuela returns to the kitchen and cooks something and the dead man sits up and he eats it. Tino comes out from under the table. Nadie says nothing to him.
That’s how i found out: some animals share a soul with some people.

X. In the Beginning

When i am crowned
I
pass away.

openness the size of the planet roars through
committment so complete
no one is around to sign on the
dotted line or
pick up the total lack of pieces not a soul is searching for when
I
disappear leaving
what was that you said?

Madrina is rewarded with a strange one
born vomitando and smiling.

Her teeth, she tells her brush them.
i face the city and smile.

i am passing as a human
of this time and place.