Time Carries All Things Away 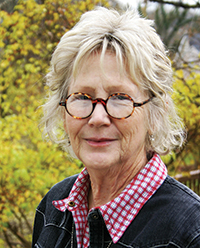 Bonnie Stanard grew up in rural South Carolina, married in Virginia, and moved to Chicago where she wrote poetry with Eloise Fink. After Chicago, she edited publications while living in Brussels, Belgium, Atlanta, and Richmond. Arriving late to prose, she has published six novels and a children’s book in the last five years. Her short stories and poems have appeared in journals such as The American Journal of Poetry, Triggerfish Critical Review, Wisconsin Review, and Broad River Review.

Bonnie Stanard’s poems take the reader on the journey from homebirth to fingertip travelling on the internet, all with the womanly wisdom of a sensual observer. From the beds of Southern pickups, to the vicissitudes of weather, to the whisper of “what God says,” to barn smells, to the unending search for family connection, Stanard digs deep past the dirt to the truth. ~Charlotte Morgan, author of Protecting Elvis.

Bonnie Stannard is a Carolina treasure. Her poetry sinks deep into the red earth and reminds us of who we are and who we were. This new collection is Bonnie at her introspective best. We are all better for seeing ourselves through her eyes and for beholding her in this transparent light. ~Len Lawson

Bonnie Stanard opens a time capsule of yesterday’s remnants – full moons and gooseberries, sultry summer days and feed sacks, ironing boards and general stores – and leaves them as “comment cards for future generations.” Negotiating the cross currents of faith and heritage through farmhouse, barn, field, and church, this careful poet honors the past with precise imagery and controlled musical language. These poems carry a narrative worthy of remembrance. ~Sandy Coomer, author of Available Light

AKIN TO A ROOSTER’S CROW

It was at ten p.m. on a squeaky bed
that Mama pushed me out
while Grandma helped as she could
as she had for every other baby born in our house.

I puckered, squealed, and opened my eyes
to the frame walls, plank floors
and rattling doors of the farmhouse I grew to love.

Strange, how I won favor over and above
my brothers and sisters because I was born
when a relative lived with us,
a man without a home
and too sick for the Army.
My first attempts at words whistled
through my teeth and so charmed him
he took me everywhere
except fishing until I was three
and he was as old as he was going to be.
As my uncle, he made me worthy for better,
but at night he heaved for breath
and even yet, his struggle for air
suffocates memories of him.

Barely before my mother could recover from birthing me
a baby girl was born, and several years later
though my father objected, another brother.

We played in the hay loft, pastures, and fields,
climbed Chinaberry trees, swam in the Edisto River
and stayed with Grandma in the summers
along with my cousins, all boys.

The rough and tumble of gangland relatives
taught me to run and hide when I could
and when I couldn’t to tell lies and fight dirty.

THE SENSUALS OF LIVING IN THE SOUTH

In late August
a dusty vapor loiters
above the millet field
where pigweeds tower
above the withered pearls.

In the shade of turkey oaks
benumbed bullises
fatten and drop from vines,
drunken bees pitch and wobble
in pursuit of overripe fruit.

Crabgrass wilts to a fevered
brown and collapses on the ground.
Noontime swelters
by degrees up the thermometer,
a worm track of mercury
that inches in the afternoon
to a hundred and two.

The crop’s cooked,
the cash has run dry,
the pond’s down,
and the cow bellows
in the bottomland.
It hasn’t rained
for forty days
and we won’t
see a cool ninety
until September.

was built with one window,
small as an orange crate,
and wood walls of pine planks
pulled by wagonloads
from a sawmill on the Edisto River
long before roads around Fairview had names.
The tin roof extends a shed shelter
overhead the sandy lot out front.

For years barefoot children chased around
parked pickup trucks as their fathers
inside picked up cigarettes, sugar,
soap, nails, wire, odds and ends.
Brogans chinked the floorboards with dirt
brought in by rugged farmers.

coming and going, flat-out and down-right,
the price of fertilizer and seed,
the question of Jersey or Guernsey,
Yorkshire or Berkshire, Farmall or Ford

the weather never far from it all.
Its authority over crops
affected every man in the room
though nobody dared criticize
the Almighty’s handiwork, even if the cotton
dried up or the corn washed away.

Today the store is occupied by mice, squirrels, and spiders.
A concrete store with walk-in coolers
has been built across the road.
Next to it is the Crossroads Café where people
eat catfish stew on Thursdays and sirloin on Fridays.

People eat away from the family table,
taking food in a roomful of strangers,
none of them farmers
even if it doesn’t seem right.