Time of the Light 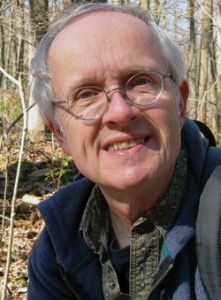 Ed Davis is a West Virginia native who recently retired from teaching writing full-time at Sinclair Community College in Dayton, Ohio. He has also taught both fiction and poetry at the Antioch Writers’ Workshop and is the author of the novels I Was So Much Older Then (Disc-Us Books, 2001) and The Measure of Everything (Plain View Press, 2005); four poetry chapbooks; and many published stories and poems in anthologies and journals such as Wild, Sweet Notes: Fifty Years of West Virginia Poetry, 1950-1999. He lives with his wife and cats in the bucolic village of Yellow Springs, Ohio, where he writes, bikes, hikes and blogs on mostly literary topics at www.davised.com.

Ed Davis’s down-to -earth poems often pit the mundane against the power of art. In “Dawn Singer in a College Bathroom,” the speaker sits anonymously in a stall, listens to a singer at the sink and finds himself falling short– “convicted by his (the singer’s) sweet testimony of being a prose-droning,/poetry less Standard English hack.” The song bounces off porcelain walls, sung by a kid “boogying to music leached up from the gut by the soul’s thirsty roots.” This poem, at the heart of Davis’s collection, tells us what he wants his work to do for us– and what his work expects from him.

Ed Davis’ poems can “fix flats, tie flies, tell lies with a granite face.” They “schmooze, razz, tsk and grin” and sometimes watch him “worse than God.” These poems show how an Appalachian boy becomes a man with memories as simple as “Schlitz, Chevies, and Slim Jims.” Davis has the gift for creating the rolling list, a catalog of details that lifts his stories off the page and into memory. He describes his own hands as “scarred, scabbed, scored and worn,” tools that perform tasks “too numerous and terrible to name.” He writes odes to boots, beets, and crows with an ear tuned so carefully to dialect that no one doubts its authenticity. But, beneath that rich, rolling tender language there is a toughness, a trust in humanity even when “age comes unbidden” and it’s time to park the Harley and walk.

These poems resist stain,
won’t wrinkle, shrink
or needlessly bleed.
These poems speak Spanish,
know Latin and do higher math;
can fix flats, tie flies,
tell lies with a granite face.
They rocked my faith,
quaked my innocence,
cracked my skull wide
to let in light, dust and dreams.
They played with the Stones
at Altamont, Beatles at Shea,
Elvis on a velvet Vegas stage.
They never drink and drive,
pay what they owe,
lost and found Jesus a thousand times.
They watch me worse than God,
forgive me like friends,
bless me like a father,
pluck mandolins and frail
banjoes on Sunday afternoons;
shmooze, razz, tsk and grin
like spinsters behind their hands.
They’ve sometimes fought me,
spoiled me like a mother,
spurned me like a lover,
covered me on nights I fled
my bed too heartsick to sleep.
I’ve left these poems behind
a hundred million times,
lying in ditches, tossed
thoughtlessly from speeding cars,
buried deep on cemetery ridges.
But these poems,
abiding like blood,
cleaving like flesh,
true as wounds,
never left me.

MY HANDS AT FIFTY-FIVE

Slashers, hackers, hitters and missers,
maps of my labor, dead scrolls of woe;
scarred, scabbed, scored and worn;
they’ve sometimes been tender tools,
at others, utterly useless fools.
Reading, I’ll look at the two handles
dangling at the ends of my arms—
tissuey, taut and desiccated enough,
nearly, to towel up spills—and wonder:
whose are these?

Beth in high school called
them “English hands”; surely
only in a sophomore’s imagination
were such appendages capable
of the devil’s handiwork she had in mind.
For half a century, they shuffled cards,
played guitars, graded papers,
fondled, petted, clapped, caressed;
pounded, pointed, prayed and plied;
snatched, sculpted, smashed, shushed;
cracked, clutched, clasped, crushed;
held up, held on, held down, held out.

Today they shake, stutter and ache
but mostly do the things I ask,
tasks too numerous and terrible to name.
Sometimes I don’t know these elders
who aged while I forgot to watch.
Will they trust me to know
when to let them lapse silent
and cease their nervous work;
or will they, even as I’m laid in my grave,
rise to punctuate one last point?

TIME OF THE LIGHT

You’ve got to be ready for it:
that tiny crack between
dusk and night when,
for several moments,
all goes golden
as sky meets horizon,
the invisible goes
luminous and earthly
ghosts go to ground and
energy rises to meet them.
Glimpsed with friends
who taught me to see,
I’ve never forgotten how.
Deep in Ohio glen,
hiking rocky hillside,
or following the creek,
I’ll see things start their gleam,
then I’ll wait and watch.
Branches become burnished
like heartwood afire,
stones shimmer,
water flames and I’m a man
caught in the middle
of his life again,
agape at the gods.