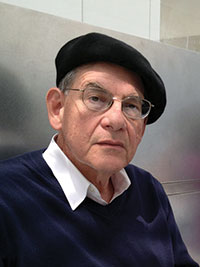 Mark Smith-Soto is the author of four prize-winning chapbooks and two full-length poetry collections, Our Lives Are Rivers (University Press of Florida, 2003), and Any Second Now (Main Street Rag Publishing Co., 2006). His work, which has appeared in Antioch Review, Kenyon Review, Literary Review, Nimrod, Rattle, The Sun and many other magazines, has earned several Pushcart Prize nominations and an NEA fellowship in creative writing. His most recent publications are Fever Season, translations of poems by Costa Rican writer Ana Istarú (Unicorn Press, 2010); Berkeley Prelude: A Lyrical Memoir (Unicorn Press, 2012); and the chapbook Splices (Finishing Line Press, 2013).

Whenever I find a poet who can write lines such as these I know I’ve found the real genuine article: “Where is the sun hiding/Beyond the corner of the paper, maybe on the other side/of the wire spiral holding/the morning together.” What pleasure in simply saying these lines! Mark Smith Soto’s poems hold the world together, and what a world it is, full of language always seeking the other side, its spiral of image and syntax, all the glories of the English language infused with his native Spanish. The rhythm and dance of poetry is a time piece, after all, and Smith-Soto knows that metaphorical reality in his bones and in his imagination. He has been one of my favorite poets since the first moment I read one of his poems. This new collection only adds to my admiration for his work. — Kathryn Stripling Byer, former Poet Laureate of North Carolina

Mark Smith-Soto’s poetry merges cultures and familial memory with an aesthetic clarity and wisdom that I admire greatly as a reader and envy as a writer. In Time Pieces, the poet takes us on a linguistic journey across time, place, and emotional landscapes that inform and excite in equal measure. Smith-Soto is at home with free verse and formal tactics alike, always matching form and content in galvanizing ways. He is also not afraid to explore the big themes of life and death, philosophy and religion—but always with a concrete grounding that makes complex concepts accessible. Do yourself a favor: read and reread this book. — Okla Elliott, author of The Cartographer’s Ink and From the Crooked Timber

Memories and mortalities, shapes of what has been, in words that rebuild the exotic world of WAS—these are themes running through Mark Smith-Soto’s moving new collection. Here, the language of a former heart beats insistently NOW, NOW, valuing things with a resonant freshness, the child’s surprise expanded into the resonant comprehension of the man. The present scene, whether a mermaid painted on a wall, a women’s prison, or the word GOD, let go of, reanimate life with a sanctifying vision. This is a humbly sacramental poetry, achieved within a permanence-making artistry and wisdom. I admire and treasure this book. — James Applewhite

Watching you shave, standing close to you now
as to a big brother who doesn’t mind what
you do, so long as you don’t Why? or How?
him to death—close enough to hear the soft

scrape of the blade—my fingertips tingle
with the beard on abuelito’s face and how
he let me touch the stubble on his chin
before it disappeared into the mirror’s shadow,

back in the Alajuela days when everyone
was still alive, before we became people things
happen to, one another’s possible regret.

And as the razor rides your cheek, I’m watching
my grandfather cut trails along his lathered skin,
so many trails that soon none were left.

In our Sunday best, we’re fit companions
for this lawyer spent by fifty years, four sons,
and an infarction. Never a man for show,
his calm display embarrasses us now,
as if he’d stretched out to let us watch,
knowing himself naked. He’s much
the same, though changed, like someone
unphotogenic. New are the shadows spun
over his cheeks, and, under the tuxedo,
his belly’s been ironed flat. Tulita reaches
a fist out suddenly and taps on his chest,
evoking the sound of cardboard, starched
hard. She knocks again and again—
but his stubbornness, at any rate, remains.

Things Sweeten Toward Their End

The man is nearly ninety and not nice, exactly,
the famous wit still pokes us when we’re proud,
and tries the weakness we most want to hide,

which not too long ago would make us blush.
He hasn’t had his stroke, his fall, his wife
still likes to laugh. He pulls up the blinds on

March each day, to watch the hard frost yield
to intimations of green life across the lawn.
He isn’t weary of his own puns yet, he is

not haunted by things he might have done,
he hasn’t broached the port of penitence.
Breakfast is two flights down, not a transparent

fact, but not a serious test for knees that climbed
three hills to the Alhambra recently. Still,
he volunteered a hug when we dropped by,

not just the little handshake we always got,
and the letter we received from him today,
somehow delivered despite the wrong address

and full of words we thought he’d never say,
was tender with the tenderness of a bruise.
Next week we visit again, and we’re afraid—

he isn’t nice quite yet, but he is getting nicer.
there’s nothing we can do to hold him back.