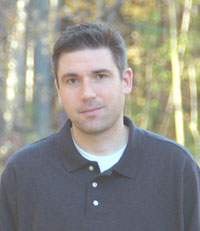 Chuck Rybak grew up in Buffalo, New York, and earned his PhD in literature and creative writing from the University of Cincinnati in 2003. His poems have been published or are forthcoming in: The Fourth River, The Ledge, Pebble Lake Review, Southern Poetry Review, and elsewhere. He lives in Oneida, Wisconsin with his wife, fiction writer Rebecca Meacham, and their daughter, Gwendolyn. His first chapbook, Nickel and Diming My Way Through, won Wind’s Quentin R. Howard prize. His second chapbook, Liketown, was released by Pudding House Publications. Chuck is a Professor of English for the University of Wisconsin Colleges-Washington County.

As the title of his book suggests, Chuck Rybak is working to reconstruct, renovate, restore, repair the damaged house of the world: We’ll learn to insulate and breathe/grade and drain away the damage/pooling in the corners of days. As the title also suggests, this rebuilding is an erotic undertaking because we must do it together: The ruined table spread across/the warm, hardwood floor. Let’s not wait./Let’s piece it together, starting now. And it must be done with love: Here is the anger that marked the wood./Here is the love that smoothed it. With a balanced and intelligent sympathy that is a measure of his disciplined commitment, Rybak writes rich, strong, and hopeful poetry that is true to the impossible task he sets for himself.

–Andrew Hudgins,
author of Ecstatic in the Poison and Babylon in a Jar

What a pleasure it is to read poems that are actually about something: men and women, domesticity, myth and magic, life during wartime. In a voice that’s distinctly American, Rybak questions without condemning, and even manages occasionally to bless.

–Juliana Gray,
author of The Man Under My Skin

When I first heard the word “homoerotic”
we were learning the Iliad in class,
so naturally I heard “Homer-erotic,”
which, given the number of men
stationed in one place for a decade with not much to do,
made perfect sense to me.

Pleased with this sharp-edged word, I hoisted it
like a javelin, pointed it at my friends,
made jabs at parties hosted by smart people.
“O, that’s entirely Homer-erotic,”
I would say into the profound pauses
I understood to be the requisite awe.

I patiently explained to my girlfriend how
being Homer-erotic was different
than being gay, which was a whole separate deal,
and that this love was the epic love of friends,
the bond beyond beers. This was marrow love,
forearm-clasping love, I’d-play-on-your-team love.

Because theory is no good without practice,
I brought my spear to the bar where Bud Light
camps outside the walls of Miller, where men,
without irony, wear the jerseys and numbers
of other men, just like the girls in high school
who dated and fawned over the football players.

A man among men, I duly sacrificed
hecatombs of peanuts and buffalo wings,
watched giants gaze up at the Olympian
big-screen and seize their neighbor’s hands, “Brother,
our team will not fail this dawn, and if they do,
let the earth yawn and swallow me in shame.”

Muses, who were the manly lords and officers?
Dick, raider-of-refrigerators was there,
and seated next to him was Frank, son of Ronald-
they loved the waitress with her tits that launched
a thousand ships, but they’d been dishonored at home,
where the slaves weren’t as grateful as they should be.

I’m embarrassed to say when I first learned
of my error, of “homoerotic”
as reality, but let’s just say that men
had already packed and made it home from Troy
while I was the last one standing, and not
because I’d won the Homeric spelling bee.

Once it was gone I wanted my word back.
I miss you Agamemnon, dick that you were.
I miss the big cry baby, Achilles,
as well. I miss the Homer-erotic
annunciation of men who offend fickle gods
and mispronounce all that they’ve heard with pride.

Now, I sit as quiet as a bowl in a china shop.
I beg the gods for an escape goat
because not knowing the score is cutting your nose,
despite your face. Make no mistake-
when you say it right, “homo” makes the men see
red, ill-fated pigment of the imagination.

When Grant squeezed Vicksburg
the siege outlasted trees, the Mississippi men
burrowed into bluffs, even the river itself.
Spectators huddled on the hilltops,
Sunday dressed, sharing umbrellas
and stale tobacco, a set of glasses
to glimpse the Yankee General
who’d tied a private to a cypress trunk
for punching a horse. A family,
picnicking on a small plateau,
gazed at one another with wonder,
found they were deaf to the war while they watched
it rage below. The slightest breeze drowned
the battle, the cracking timber,
the latest charge. These reprieves came to be called
acoustic shadows, where whispers remained
possible. Those outside the pocket
surrendered the calm in their faces,
who heard every yell, the choked cries
for Jesus, a twenty-gun barrage
to avenge a distant battle’s Union dead.
In the shadow, threat is a pantomime,
as elaborate and cool as a sunset.
The family dined in peace while terror’s pitch
echoed well beyond their ears–
the dangers, real and marching in, wondered
how this group could pass the wedges of a pie,
laughing in a place they could not leave.

Why not put the propANE tANK Alongside
the fire pit? Or the ACME weed killer
ADJAcent the prized hydrANGEA? Don’t mind
the stone BuddhAS on the daRK hARDWOOD floor,
ANd go on, just roll those throAT-sized mARBLES
in the bABY”S room-I’m sure she’d like to plAY.
Shift the heART from the chest into the skull,
of course its steADY beAT won’t upset the brAIN.

WhAT cAUSED you to seek such lASTING revenge?
Were you writing to your love when a GOd,
clAD As AN AnimAL, crept within rANGE
And rAVISHED thAT love, escAPED to the top
of a sheer, unscALAble, cAPITAl A?
Do we type the rescue? Your leAP from lower cASE?