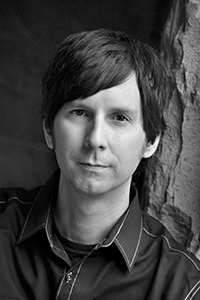 Martin Balgach
Martin Balgach’s writing has appeared in The Bitter Oleander, Cream City Review, Fogged Clarity, Phantom Limb, Rain Taxi, and Stirring, among other journals. He holds an MFA from the Vermont College of Fine Arts, works in publishing, and lives with his wife and son in Colorado. More of his work may be found at www.martinbalgach.com.

Most poets are satisfied to be motivated by the certainty of memory, even by the stories that are “hiding / in the jowls of our dead.” But Martin Balgach in his very wise Too Much Breath knows memory is something we have to fight with our vision of an unknown future which is why he says in one poem “I want to be inside things I’ll never know.” The result is a perceptive and engaging poetry marked by paradoxes where he wants “to lose everything I’ve never had.” The stakes are that high: the loss even of loss. At once philosophical and heart rending, this is a terrific book that pulls the curtain away from our easily satisfied nostalgias to reveal unsettling truths. But it never ends there, nor does a poetic quest like his end there, for Balgach is the real thing, and his poetry is a life’s work, as William Matthews once quipped, for a poet who can imagine, in the face of such loss, how eventually his “old heartbeats / vibrate to the stars.”

The poems in Too Much Breath seem spoken from the eye of a hurricane of both the world’s and the self’s making, a vantage point that promises no easy abidance of strife. But somehow the Hericlitean notion that justice IS strife is summoned, embodied, blooded, and set about to walk and think and feel and wonder in a verse commensurate to the energies it cannot live without. Martin Balgach combines an eastern European visionary temperament with gritty American experience, not by pattern, but anew, poem after poem, to remind us that poetry is, yes, of our earth, but that this is exactly why it can take from the celestial, for as his wonderful poem “Warmth” says on behalf of the sun, “We are kept alive by a star.” This is a terrific  debut.

Then in my palms
a child plays with daylight

A magician
poofs a rabbit out of smoke

No one wins
and everyone walks away
angry as catapults

I want to lose everything I’ve never had

But the answers of the hours
only apply to the daylight

as I feel the yellow chalk light
of another sad song

nothing competes
with the commingled sunshine

We are kept alive by a star

I know what’s out there—

a million blades of grass
trying to be pretty

a gazillion leaves
singing the falsetto massacre of fall

plenty of pavement
showing me where to go

somewhere I’m sure a cloud
is posing as a pigmy

and there’s enough sunshine
to get me drunk

but I’m here with my coffee cup
every window shut