This manuscript was selected for publication after finishing as a finalist in the 2006 MSR Chapbook Contest. 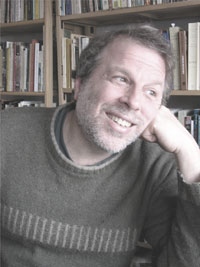 Brad Clompus was raised in and around Philadelphia, Pennsylvania. He attended Grinnell College for his BA and received an MFA from the University of Iowa Writers’ Workshop. His poetry and essays have appeared in The Journal, West Branch, Passages North, Tampa Review, Sonora Review, Natural Bridge, and The Cortland Review, among other publications. He now lives in Massachusetts with his wife and son. Since 1996, he has been on the faculty of the Arlington Center for the Arts, where he teaches a poetry workshop.

Trailing It Home offers us poems of depth and quiet persuasion. Each one pulls us into a small universe in which change is imminent but whose range and measure are unspoken, unspeakable. We are there with the woman and her dog, feasting with them on the “glimmer” that in a moment will-must-alter. We feel the walls and darkness and depth in a labyrinth of caves as both a cage and a release. And as in the poem Mid-Winter Walk, “We stand still, sample air” all the while knowing that air may prove unreliable, able to outwit us anytime. Brad Clompus asks us to stand still and pay attention in these poems, so that eventually we may see the sun that “throbs on the table’s edge, snared/ by invisible strings.” The poems here are precise and finely wrought-each line speaks to us directly of our place in the natural world.

Cooler than it was,
and a slip of wind riffles

the surface, so that it wrinkles
and lisps when it touches shore.

Only the geese overhead, crooning
their staggered horns, might

reveal themselves-if we
had will to cross with them,

if we could, almost touching,
wing to beating wing.

Frogs, turtles, gone, or breathing
under mud. The heron lingers,

a hollow stalk, its piercing bill
an arrow aimed at muck,

frozen, installed in space, sculpted
from an idea of the kill.

Nothing that can move, moves,
or has such will, but pond ripples,

confusion of crosshatch,
skittering through all quadrants,

the wide slow ones rowing ponderously,
as if they had all day, and the next one too,

the frantic thin ones in concentric rills,
eager to make their little run,

silk disturbances in exhaling arcs.
And where they touch the other shore,

I can only imagine. And the source-
whether mallard dunking its head,

or water bug zigging angles,
or something else, unmanifest,

impersonal, an effect waiting
its cause, I can only imagine.
Woman Bathing in the West River

Emerged from a green-needled wall,
fabric of woods risen as sheer terrace,
the woman and dog settle on a large flat rock-
her black shepherd, not far from wolf,
wades in, lifts a dripping paw,
freezes in place, peers through panes of stream,
then looks back at her, pleadingly,
and she, aloof from all the swimmers,
hair curtained long around her oval face,
slides her long legs into the glimmer.
Where she steps the soft tadpoles scatter,
then slowly settle to rest,
so heavy this time of year they do not
wish to move, gravid with
change that is coming, their sharp little tails
withering away, futile as afterthoughts.

Expelled from the woods at noon,
bark-brown, reeking of swamp,
with tender, palmate antlers
weightless over his bulk,
he clopped down
the town’s main street,
his eyes fogged and serene
like a martyr’s.
When they spotted him,
pointed and yelled,
he began to lope. He knew
the way to a stream
which divided the town,
where he slid down the banks,
and plunged to his chest.
The stream left town, flowed
between moss-padded hills
and flushed him to sea.
He swam out with wild
rocking bursts of will, striding
invisibly, his paradise
just beyond the dusky swells.
Pushing a translucent billow,
a party in a skiff chased,
caught up, prodded with oars,
tried to force him back.
They saw wet, felty antlers,
a cone of snout,
and behind, a hump
like coconut-husk.
He couldn’t be diverted.
He had something great in mind,
before he tired, gasped,
blew like a whale,
then drowned.
They roped his hind quarters
so he wouldn’t sink.
On the dock, he weighed in
at six seventy-two. Five families
feasted that week.
All of this is on record.
The next day’s paper
had four pictures on page one
of the moose’s progress:
at the edge of woods,
trotting down the street,
wading in the stream,
being dragged back.
In this last one,
his long brown head
blurs into the tunnel
of its wake.