Traveler in the Sunset Clouds 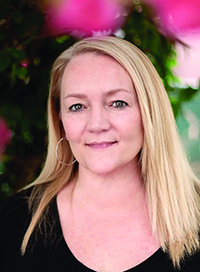 Lauren Tivey is the author of four chapbooks, most recently Moroccan Holiday, winner of The Poetry Box Chapbook Prize 2019. Tivey is a three-time Pushcart Prize nominee and Best of the Net nominee. Her work has appeared in South Florida Poetry Journal, Saw Palm, Connotation Press, and Split Lip Magazine, among dozens of other publications. After much international travel, including a six-year stint living in China, she now resides in St. Augustine, Florida, where she teaches English at Flagler College. Traveler in the Sunset Clouds is her first full-length collection.

Tivey is documentarian, empath, tour guide, educator, friend, and yes, even more in this remarkable debut! Her lines are meticulously sound in their construction and sensory details abundant, thus allowing for controlled and sensational movement throughout Traveler in the Sunset Clouds. The opposing interpretations of this title contribute to the complexity, as do some poem titles (e.g. “Chinese Prosperity”) in relation to their lines, “In the ancient fishing village, all the fish are dead.” Brava! ~Kevin McLellan, author of Ornitheology and Tributary

“Let the journey begin,” Lauren Tivey says in one poem in this stunning collection, and what a journey it is, not just of her experience of Xu, but of herself. The obsession is time–the seasons and their inevitable passage, but also the fullness of the present that counteracts it. As she says in another poem “I thought, why keep looking / to the distant, unknowable skies / when you miss so much happiness / right here under your feet?” And there is much at her feet, a poetry full of rich detail of the ordinary world–like the woman in her slippers who keeps a caged sparrow whose song opens up an almost transcendental world. We get the sense throughout of this complexity. And isn’t that what all good poetry is supposed to do? Here, Tivey does it in a way that not only carries us along with her, but sets us off on our own journeys. ~Richard Jackson, Author of The Heart as Framed: New and Select Poems

Lauren Tivey’s poems, in Traveler in the Sunset Clouds, are truly masterful. Her poetry allows space for beauty and reveals the wholeness of human flaws, woven together with vibrant sounds. The poems are historical and transformational; they travel from the Ming dynasty explorer, Xu Xiake, to present-day China. The poems dance across the page like Tai Chi, between greatness and ruin, and from ruins to greatness. ~Joseph Zaccardi

Day of His Birth

Consciousness a spark shooting through space, earth a tie-dyed sphere rotating in liquid black, and he’s circling, aiming for it, straight from heaven, looking for the land of the East. He zooms down, a hawk gliding over mountains, rivers, canyons, forests, and lakes, then the temples coming into view, towns, humans in their robes, and he darts in and out of painted houses, past courtyard fires, potbellied cauldrons, familial altars, glaring idols, fruit offerings, incense smoldering, into a curtained back room to find the young beauty with long, loose hair the color of ink, bawling and straining in childbirth on a straw mat, midwife with her bloody hands beneath. And he hovers a moment, recognizing his mother’s face, before diving in to inhabit the bundle of flesh, nerves, and bone in her womb, possessing the gray matter, then sliding through the slick, pulsating tunnel into a world awaiting his footsteps. Outside, paper-tissue petals of the lotus blossoms blush pink, springing skyward, heralding his arrival. Xiake, they’ll name him, Traveler in the Sunset Clouds.

One Rambler to Another

I first saw him at the Peony Moon, clouds
sailing across a pearl sky, his massive statue

near the road to Shanghai in a landscaped park.
In the silver light, his wild mane, epic beard,

a fierce eye. I had to know every detail,
asked around. Xu Xiake, they said, proudly—

Jiangyin’s own celebrity explorer, born
south of the Yangtze during the Dynasty

of Ming. Rover of the far-flung misty
mountains, spelunker of sleeping caves,

voyager of uncharted lands. I go back
to the park in daylight, dwarfed against

his mammoth right foot, to contemplate
the storied deeds, obsessed with his legend;

me, devotee of expeditions and escapades.
Traveler, he says, let the journey begin.

Worshippers bring disease and disgrace
to the temple. Behind glass, the golden man
is a sitting lotus, safe from the grease of hands.

with him. Red candles are lit, promises made.
For a coin, fickle fortunes are studied in the yarrow
stalks. Deflated, losers go back to prayers, clicking

their mala beads, while others, winners of both large
and small battles, endorse idols with bills, beaming
like glad children. Everyone plays, desperate to offer

themselves, chanting until the divine heat cracks open
their fragile pits, spreads into the secret, sodden centers
to deliver the shuddering blessing, rapture of the cosmos.

After the ceremony, cleaning ladies dust yellow and purple
orchids, gossiping and flirting with monks. Vinyl cushions
hold the intentions of knees, and fat oranges glisten on altars.

Outside, Bodhis twist to the light in a fog of joss sticks.
Everything cleansed, in love with the world. Even the koi,
in a reflection of marigolds, are smiling in the pond.

Year of the Snake

It slithers in, dank and black in the night,
bringing its bombs, guns, knives, eerie
eye of the lunatic fringe, encouraging

the fanatical, and that’s no joke, no
cute astrological nonsense, now, is it?
This morning’s rain is cold, spotting

the windows, as I sit and worry
about loved ones near and far.
In a good Snake Year, business

deals, money-making (beware
of loopholes), but an ill-fated Snake
Year is the Satanic abyss, the void

of deep space, a hungry wolf
howling in the Arctic expanse,
vibrating on a full moon nerve.

In the blue light of the television,
I am sending electronic messages
of support, carrying on with both

hope and dread. When it stops raining
later today, I will go out and look at all
the flowers of this mad, gone world.